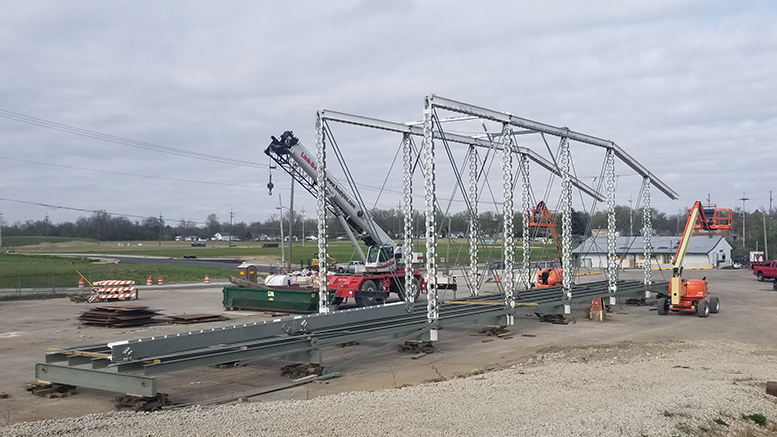 Muncie, IN—The Kitselman Trailhead, Muncie’s new eastern gateway to the city, has kicked-off the second phase of construction. This entrance into Muncie will be fundamentally transformed with the addition of a pedestrian bridge, new trail connections, trailhead parking, and a sloped lawn with seating overlooking the White River. The restored Albany Bridge—the centerpiece of the Kitselman Trailhead—is designed to connect the White River Greenway and the Cardinal Greenway trails. During the 2019 construction season, the restored Albany Bridge will be reassembled, painted, and placed over the White River. Trail connections and amenities will then be constructed with a focus on the eastern side of the White River. A new bike trail will begin at Bunch Boulevard near the John Craddock Wetlands and will pass under the new State Road 32 “East Jackson Street Bridge.” The trail will then loop over the former Indiana Steel and Wire employee parking lot area connecting to the Albany Bridge to cross the White River and link directly to the Cardinal Greenway. This phase of construction is also envisioned to include parking, seating, and a grand lawn area that will slope from the trailhead parking lot toward the river. The trailhead will be built on top of the former Indiana Steel and Wire employee parking lot.   The eastern trailhead area is planned for 2019 completion.

The idea for building a connection between the White River Greenway and Cardinal Greenway originated in 1995. The leader of the vision was Marjorie Zeigler, Founder of Community Enhancement Projects, Inc., and along with her husband Sherman, of the Sherman and Marjorie Zeigler Foundation.  At the time of the idea’s origination, Indiana Steel and Wire and Broderick Hammer were still in full operation.

As the project moved from idea to design and construction, Cardinal Greenway and Community Enhancement Projects assembled a broad-based partnership for the Kitselman Trailhead project that includes the City of Muncie and Muncie Sanitary District, with major funding to build the first and second phases of the project provided by INDOT, Ball Brothers Foundation, the Edmund F. and Virginia B. Ball Foundation, and the Community Foundation of Muncie & Delaware County’s Kitselman Fund.

Much has changed in the immediate area surrounding the Kitselman Trailhead since the idea of building a bridge to connect the two Muncie greenways came about. Today, virtually all of the industrial buildings in the Kitselman area are gone. Property that was once a steel and concretized heavy industrial factory is in a renewal period. Adjacent property on the former Indiana Steel and Wire site has been recently envisioned as an energy efficient example of light industry and “live-work” housing. The Kitselman Pure Energy Park (KPEP) is converting the former industrial site from brownfield to greenfield, already having filled the former wire mill site with approximately 5 feet of soil and having seeded the entire area with grass. In addition, Bunch Boulevard has been rerouted to better accommodate vehicle traffic and pedestrian/cycling routes in conjunction with the Kitselman Trailhead project, the KPEP project, and the INDOT SR 32 bridge replacement project.

“It has taken a great deal of coordination to build-out this three decades old idea,” explained Angie Pool, Cardinal Greenway CEO. “The project has required unprecedented cooperation with INDOT, the City of Muncie, the Muncie Sanitary District and the Army Corps of Engineers. The timing and relocation of Bunch Boulevard to synchronize with the INDOT Bridge reconstruction is just one example of the broad-based cooperation needed to bring the overall Kitselman gateway vision to life.”

For nearly a year, Camden Construction, a specialty contractor, has been restoring the old Albany Bridge in their shop in Warsaw, Indiana. Camden is working with Beaty Construction of Boggstown, Indiana to re-erect and place the bridge onto piers. Bridge installation is set for late May 2019. 3D Construction of Muncie will then begin work on the eastern trailhead area with an estimated start date of June 2019. The Kitselman Trailhead project design and management team includes FlatLand Resources, HWC Engineering, and Land Collective.

The former wire mill dam is also slated to be removed during the 2019 construction season. Removal of the dam has been a part of the Kitselman vision for many years. While removal of the dam will create more area next to the river for trail buildout, removal of the dam will also allow for significant ecological, recreational, and safety improvements. Dam removal will improve aquatic habitats, improve fishing opportunities, and will make access to the water safer for people wishing to kayak, tube, or fish in the vicinity. FlatLand Resources of Muncie will be managing the dam removal.

“This bridge and trailhead has been decades in the making,” said Marta Moody, Cardinal Greenway President. “So many great community leaders sat in meetings for years and years discussing how to create a meaningful entryway into Muncie coming from the east. The idea was to bridge the two greenways, celebrate the river, and build an eastern city gateway using art and recreation. While a number of these leaders are no longer living, the vision and plans they created to build a city gateway and a trail connector remain in their solid foundations.”

The third phase of the project—which will focus on improvements to the west side of the White River— is in the  design, engineering, and fundraising stage with ambitions to build parts of phase 3 in 2022.

The Kitselman Bridge is expected to be set in place in the next three weeks.