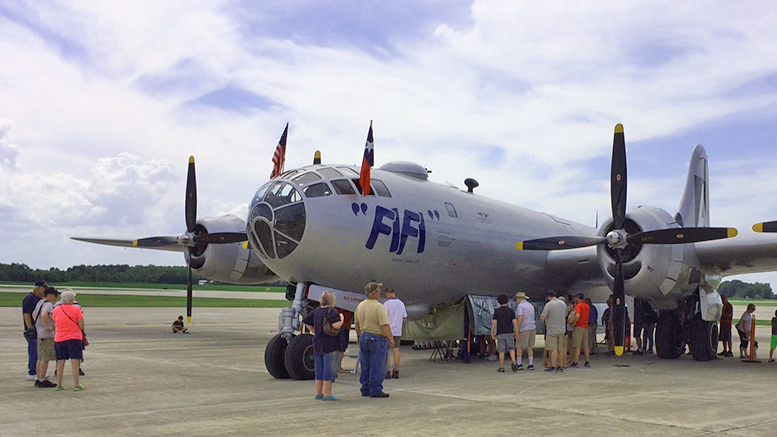 Muncie, IN—A big, beautiful lady made a dramatic arrival at the Delaware County Airport on Monday, and was soon swamped by suitors longing to meet and touch her.

She’s owned by the Commemorative Air Force, and one of only two Boeing Superfortresses flying in the world today. A single glance was all it took to know that, after a rocky upbringing, things were different now. For seventeen years she had been parked in a Navy desert storage depot. There she had endured sand, heat and even being used as a gunnery target.  But once acquired by the CAF, she had spent her recent years being pampered and primped by people who love and care for her. By the way, it was two of her siblings, the Enola Gay and then Bock’s Car, who dropped the atomic bombs that ended World War ll.

Joining her on the tarmac just below the Muncie airport’s control tower were three other warbirds. There was a Stearman primary trainer and a T-6 Texan, which during the war was the last stop in an air cadet’s training before being handed “the keys” to a real fighter plane. There was also my buddy Bill Finney’s beautiful Cessna Birddog, the type of military spotter plane that earned a heroic combat record in the Korean War and in Vietnam.

Still, FiFi pretty much stole the show. Visitors like Aaron Poehliein, an employee of Magna Powertrain, had hurried to the airport after work to see her.

“A friend who loves flying told me about it,” he said, and while he didn’t anticipate visiting Fifi would inspire him to take to the sky himself, he was excited to be there.

Selling tickets, meanwhile, was Todd Erskine, of Russellville, Ark., who was busy taking cash and credit cards as folks kept streaming inside.

“FiFi is a popular attraction,” said the engineer, who when she flies is a “scanner,” part of her flight crew, visually monitoring the aircraft’s four powerful radial engines to see they are operating properly. He added that doing so could sometimes seem a little unreal.

For a substantial extra charge, if it wasn’t completely booked, people could buy rides in FiFi. For a far more modest one, visitors could take a tour through FiFi’s fuselage. That idea proved irresistible to Jan Kornilow, a Muncie physician, who came with his family, including wife Carolyn, daughter Elizabeth and father-in-law Walter Sedgwick. 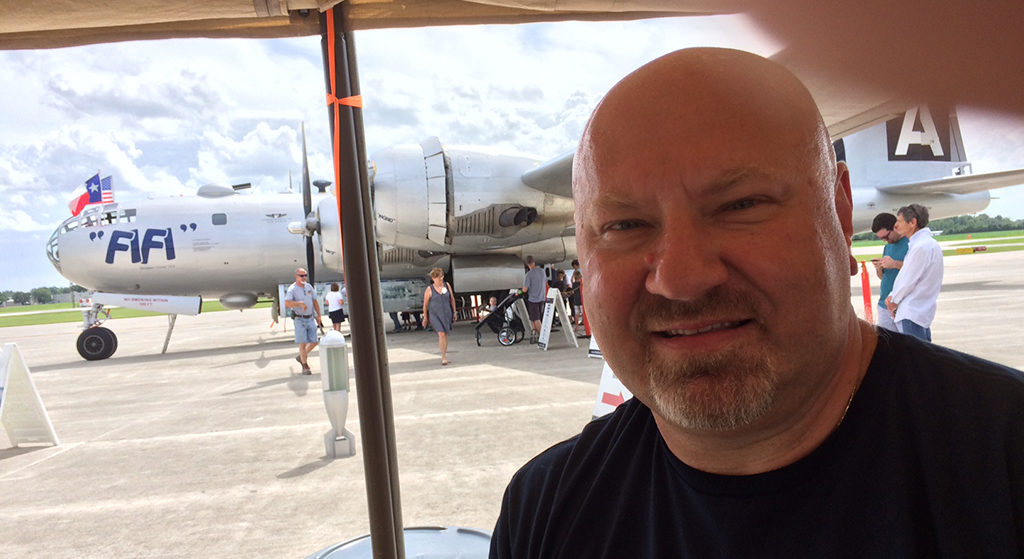 Jan Kornilow and his family took a tour inside the B-29 FiFi’s cramped fuselage. Photo by: John Carlson

“For a big guy like me there’s not much room,” he said with a smile, “but it’s unbelievable the technology they had back then.”

Then talk turned to his Polish family’s experiences with the Germans during World War II. With the exception of one unlikely kind encounter, there wasn’t much anybody could tell his grandparents and other kin about the brutal realities of war.

Of course, the same would be true for the youngsters who flew airplanes like FiFi against the Japanese in the Pacific Theater of Operations. But if there was one sad thing about FiFi’s visit, it was that five and ten years ago you’d have seen her visited by old-timers who had flown her, fought in her and watched buddies die in her. Anymore, not so much.

Still, Kornilow knew what those fellows had meant to the world.

“Brave, very brave,” he said of them, gazing at FiFi. “We can sit here and do what we did today because of those people’s sacrifices.”

FiFi will be at the Delaware County Airport through Tuesday, July 16th.