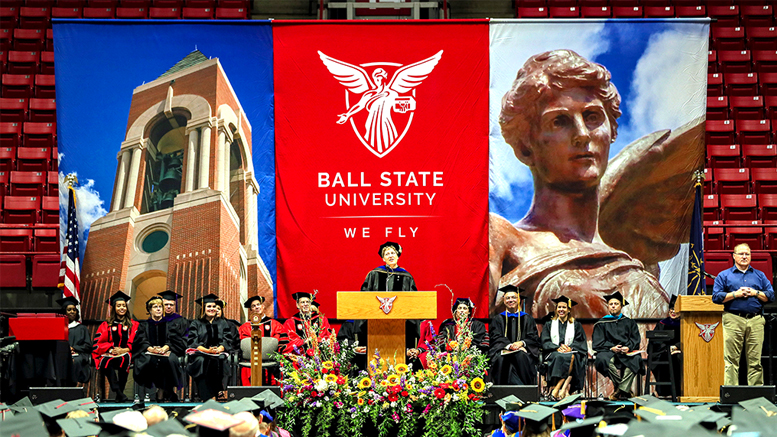 Muncie, IN – Ball State University commencement speaker Sharon Paulson told new graduates participating in ceremonies at Worthen Arena that they were now a more distinguished group as a result of their hard-earned degrees.

Dr. Paulson, now an emerita faculty member, joined the Department of Educational Psychology at Ball State in 1991, and served as the department’s chair from 2011-2017.

“You are now among only 33 percent of adults in the U.S. who hold a college degree,” she said. “Those of you earning graduate degrees are among only 9 percent of adults. These are extraordinary accomplishments and I commend all of you for making it to the elite ranks of the highly educated.”—Sharon Paulson

As part of a time-honored tradition, Ball State selects an outstanding faculty member to address summer commencement. Dr. Paulson retired at the end of this past academic year after completing her 28th year of service to Teachers College. She played a critical role on countless committees, task forces, and strategic planning teams, including service as chair of the Institutional Review Board and vice-chair of the Graduate Education Committee.

Dr. Paulson was most recently named the 2018 Ball State University Outstanding Faculty Award recipient. Published widely in her field, she has also served in leadership roles for the Society for Research in Adolescence, the Midwestern Educational Research Association, and as co-editor of The Teacher Educator.

During her address, “The Value of Education,” the longtime Ball State educator told the gathering of new graduates and their family members — along with members of the campus community — that they should remember their loved ones as they walk out the arena armed with a diploma.

“Someone instilled in you the value of education, a strong internal drive that led to many of your choices,” she said. “You chose to graduate from high school, you chose to go to college, you chose a major—maybe more than once—and you chose to complete your degree.”

In closing, Dr. Paulson urged the 1,383 new graduates to cherish and share with others the value of education for the rest of their lives.

“I hope the value you give to education will take you far. It’s time to spread your wings. We Fly.”

Founded in 1918 and located in Muncie, Ball State is one of Indiana’s premier universities and an economic driver for the state. Ball State’s nearly 22,000 students come from all over Indiana, the nation, and the world, and its 780-acre campus is large enough to accommodate premier facilities and 19 NCAA Division I sports but small enough to ensure the friendliness, personal attention, and access that are the hallmarks of the University.