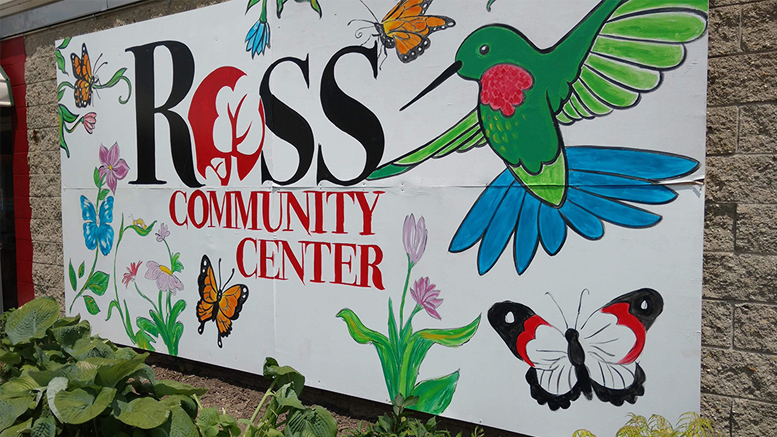 Muncie, IN—The Ross Community Center, Inc. (RCCI) southwest of downtown Muncie, is a tribute to the past and a pivotal element of Muncie’s future. Its metamorphosis in the past five years and plans for the future make it a crown jewel in the line-up of bright happenings along the South Central and Thomas Park-Avondale neighborhoods that surround a stretch of Memorial Drive.

In the mid-20th century, the area was inhabited by factory workers in a town booming with industry.  At the beginning of the 21st century, most of those jobs were gone, and many of the children and grandchildren of people who moved to Muncie for jobs in the 1930’s and 40’s found themselves struggling.

A part of the fabric of these neighborhoods for 45 years, the Ross Community Center, named for Garland Ross (a member of the Ross Grocery Stores family), has served its neighbors in a variety of ways. For more than 40 years children (and adults, too) have been part of other afterschool and community engagement programs, played euchre and bingo, participated in basketball, baseball and judo, and received multiple services. The range of programming has expanded in the last few years. Today, the mission is to “build community by providing and promoting programs, services, and activities for the advancement of education, health, and wellness in our diverse community.” Funders and donors, the center’s leadership and volunteers and neighbors are helping see the mission fulfilled.

RCCI is a Concentrated Focus Model for economic development of the neighborhood.  “We are proud to be part of the 8twelve coalition,” said Jacqueline Hanoman, executive director.  The Coalition is comprised of residents, non-profits and businesses working to revitalize the target area bordered by 8th Street, Memorial Drive, Perkins Avenue, and Madison Street.  The group’s revitalization plan was developed as a result of several community meetings spearheaded by Greater Muncie Habitat for Humanity and the Vectren Foundation. The plan focuses on improving housing, beautifying the neighborhood, enhancing education and family engagement and promoting businesses, social and economic development in the area.

Kicking off in 2015, the coalition has grown to include nearly two-dozen partners, of which the Ross Center is one. Key funds have come from local philanthropy as well as large funders outside of the area and have benefitted places like the Ross Center.

The involvement of neighborhood leadership is an exciting piece of the work of the coalition and rehabbing of houses in that area has created an improved environment.

“There’s a new sparkle in the air and a growing number of groups and individuals who are picking up tools to revitalize homes and create physical spaces of community engagement with the help of Habitat, community members, area churches and other friends,” said Hanoman. “Lowes employees, for instance, have been on hand to help in this process, building the garden area, gazebos and installing playground equipment at our center.”

Throughout its history, the Ross Center has experienced occasional periods of difficulty.  The late 90’s, when the city stopped running the local community centers, was a particularly rough time.  Some of the city’s support continued, but much of that responsibility remained in the hands of RCCI as well as the neighborhood association and area churches.

For a time, about five years ago, there were additional difficult years for the Ross Center.  Changes in leadership and challenges in trying to fund operations made it problematic to keep the doors open.  Board members such as then board chair Megan Quirk and others stepped in to staff events and provide support for operations.

One such supporter was Dr. Alice Bennett who came in to staff the center when rental groups used it for basketball, judo, or to play cards.  She was a constant advocate for the center, its work and its potential.  She had little patience with people who did not know about RCCI, or ever venture to the south side of Muncie. Dr. Bennett passed away unexpectedly in January of this year and was posthumously honored by having the educational room of the center named the “Alice Bennett Center for Creative Inquiry.”

With the generous support for baseball diamonds and other programs from the Ball Brothers Foundation, the gifts of other funders and the dedication of board, staff and members of the neighborhood, RCCI is ready to venture out to create a signature fundraiser that can support its growing programming and that can be enjoyed by the entire Delaware County community.

On Saturday, September 21, Ross Center will host the first International Festival, from 4-7 p.m. to bring the world to southwest Muncie.

Area businesses and individuals are stepping up to provide sponsorships and to buy tickets for neighbors who might not otherwise be able to attend.  Entertainment groups will be on hand to be enjoyed by all, and local experts in international foods will provide a sampling of international dishes inside the center for a $20 ticket fee.

“We are excited about this international fundraiser,” said Tania Said, board member and event co-chair.  “It will be a special event bringing together people from all communities to enjoy food and entertainment.  We believe it will enhance our international outlook in Delaware County.”

This may not be the same kind of activity that might have gone on in the past, but it is a new chapter in the Ross Community Center’s efforts to be an important force in Muncie and Delaware County and a continuing bright spot in the 8twelve Coalition’s target area.

More information on this event will be forthcoming on the Muncie Journal.

Visit the Ross Center on the web at: https://www.rosscentermuncie.org