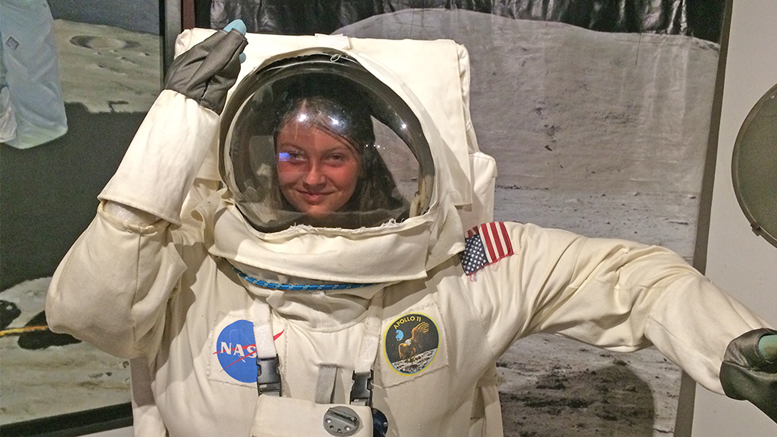 A young lady takes a look through an astronaut’s helmet. Photo by: Nancy Carlson

A small city of 10,000 people, Wapakoneta sits where Route 33 intersects busy I-75 in southwestern Ohio’s Auglaize County, a place marked by the same gas stations, convenience stores and burger joints as a million others.

But pass it on the interstate, especially at night, and the moon-like structure that commands your attention hints why this place is anything but common.

That huge full moon, which seems to be rising from the ground, appropriately denotes the Armstrong Air & Space Museum. It’s a wonderful place to visit, a suitable honor for a man who will forever be unique among humankind. As Armstrong and his fellow Apollo 11 crewmen, Buzz Aldrin and Michael Collins, were always quick to emphasize, getting to the moon required the efforts of countless thousands. Indeed, in the exploration of space, hard-working employees of Ball Corp.’s offspring, Ball Aerospace, have played significant roles. 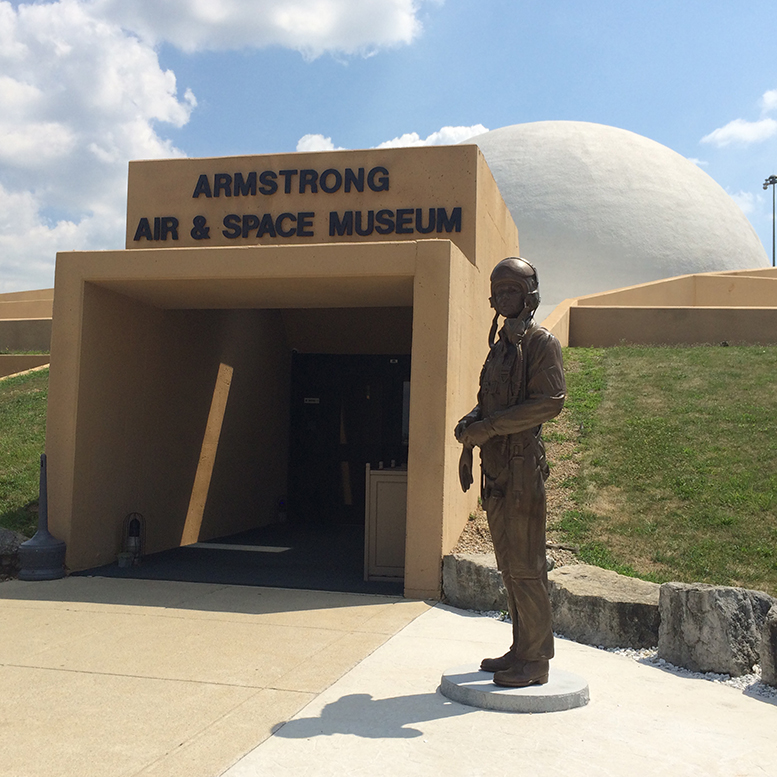 Walking toward his museum, you pass two statues, one being him as an airplane-crazy kid on a bench holding a model in his hands. The second is him as a Navy fighter pilot who flew and fought in the Korean War. This statue is tall, larger than life, befitting the man, his achievement and legend. Begin touring the museum, though, and one of the first photos you spot is of the flesh-and-blood jet jockey in his ensign’s uniform at age twenty.

Under glass nearby, there’s an aging document attesting to the youthful Armstrong’s membership in the American Rocket Society. As for where that interest eventually led, nearby there’s a Gemini space capsule of the type that he and fellow astronaut David R. Scott rode into space in 1966. It looks smaller than a vintage Volkswagen Beetle, and absolutely nothing like something you would want to sit inside  high atop a potentially explosive rocket.

“That is not big,” a passing kid observed of this space capsule, while a woman who appeared to be his mother trailed close behind, adding, “Talk about not being able to stretch out.”

On the Gemini 8 mission, Armstrong, a Purdue University graduate who by now was a civilian employee of NASA, and Scott completed the first successful docking of their capsule with another orbiting satellite. Then disaster struck, as the spacecraft began violently tumbling. Undocking, Armstrong regained control, garnering grateful praise from Scott, who admitted he was lucky to have been paired with the future moonwalker that day. Their mission aborted, the two returned safely to earth.

Armstrong’s skill as a spaceman seemed a natural offshoot of his skill as an airman. It’s funny, but with your head down reading display cards on items like his first pilot’s logbook, you might be unaware of the Aeronca 7AC Champion in which he learned to fly as a sixteen-year-old. Then an expanse of bright yellow gets your attention. It’s the left wing of the Champ he flew, the whole airplane hanging vertically from a wall right in front of you, its left aileron close enough to touch.

This brings up a good point. Armstrong was building rockets and flying airplanes as a kid. His namesake museum, in turn, was filled with other kids and parents this day, happily moving from exhibit to exhibit. Know what you didn’t see? None of those kids that I saw, nor those parents, had their face plastered to the screen of a cell phone. You had to wonder, was this place so interesting, nobody wanted to check theirs?  Or did the sort of people who come here know there are far cooler things in life than Twitter?

Either way, it was pretty remarkable.

What kids did instead was position themselves behind a cut-away space suit, getting an idea of how things looked from inside the bubble of its helmet. Elsewhere, they honed their space skills piloting a lunar lander simulator to the moon’s surface. It was pretty cool kids’ stuff. But it wasn’t all kids’ stuff. 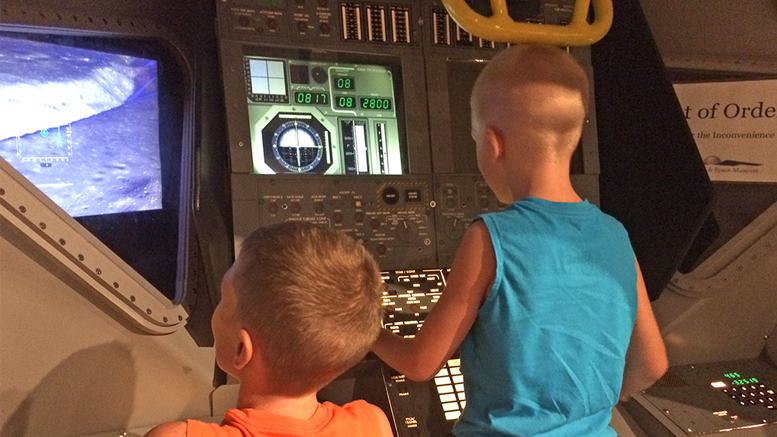 As anyone who was around for the Space Shuttle Challenger disaster knows, daring achievements  aren’t made without expending blood, sweat and tears. There’s a picture of the Apollo 1 capsule, blackened and scorched, in which astronauts Gus Grissom, Ed White and rookie Roger Chaffee burned to death on the launch pad.

Soon enough, you also encounter a film clip reinforcing the fact that “The Right Stuff” isn’t just the title of a book by Tom Wolfe.  The astronauts had it in spades. In the clip, Armstrong is practicing flying a mock-up of the lunar lander about a hundred feet off earth, when it suddenly plunges to the ground in a fiery explosion. Fortunately, without a second’s hesitation, he had ejected from the spindly looking aircraft, floating closely past its burning wreckage under a life-saving parachute.

For the rest of us, it would have been the scare of a lifetime. For Armstrong? It was just another day at the office.

Another exhibit addresses the more domestic concerns of an astronaut’s life. Space-age Pepsi and Coke cans, for example, look for all the world like something shaving cream should come foaming from.

Space food? OK, so keep in mind, nobody ever blasted into orbit because they wanted to eat well. There are dry packets of space applesauce, and cream of tomato soup. There’s a little brick of tuna salad that looks a long way from edible. There’s also a clear packet of dehydrated chicken and rice that, in its pre-preparatory stage, appears to have already been made, eaten and digested.

Most educational of everything at the museum, though, is the movie about Apollo 11, which carried  the first two moonwalkers to the moon on July 20, 1969. Unless you’ve been in a coma lately, you’ll recall that we recently observed the fiftieth anniversary of that momentous occasion. Watching it brings up several thoughts, not least of which is this: If you think we’re so all-fired smart these days, we have nothing on the white-shirted, chain-smoking NASA folks who made that journey to the moon happen. The paces they programmed Apollo 11 and the lunar module to follow seem nothing less than astounding.

That it worked? That’s even more astounding.

Even the mission’s successful conclusion seemed unreal. At the point Apollo 11 began returning its three crewmen to earth’s surface, it was traveling 24,000 miles an hour. By the time it safely ditched in the ocean under its three parachutes, it was traveling 22 miles an hour. And here’s another minor fact that seems nonetheless amazing. Once safely back on earth, among the first tasks Armstrong, Aldrin and Collins had to complete was filling out customs forms.

Asked whether we had anything to declare, I suppose most of us would have pinched ourselves in disbelief and declared, “I can’t believe I’m not dead!”

Perhaps the most astounding thing about that mission was just how brave Armstrong, Aldrin and Collins were. Could they have encountered trouble that would have marooned the two moonwalkers there for eternity? Sure. Just in case, the words had already been written for President Nixon to announce that very tragedy to the world.

Instead, the Apollo 11 crewmen were celebrated around the globe, and feted with a New York City ticker-tape parade. When that ended, though, the man who had been the focal point of it all returned to earth in the figurative sense, as well as the literal one. No boaster or headline-grabber, he lived a quiet life of teaching, of contemplation and of family and friends, avoiding the spotlight almost completely. What’s more, he returned to this world with the same sense of inquisitiveness and natural wonder that in 1969 had led him to the moon. The general consensus was, earthlings couldn’t have picked a better man than Neil Armstrong to first represent us to the universe beyond our planet.

All of which should serve as a reminder: Sometimes, nice guys finish first.

A former longtime feature writer and columnist for The Star Press in Muncie, Indiana, John Carlson is a storyteller with an unflagging appreciation for the wonderful people of East Central Indiana and the tales of their lives, be they funny, poignant, inspirational or all three.  John’s columns appear on Muncie Journal every Friday