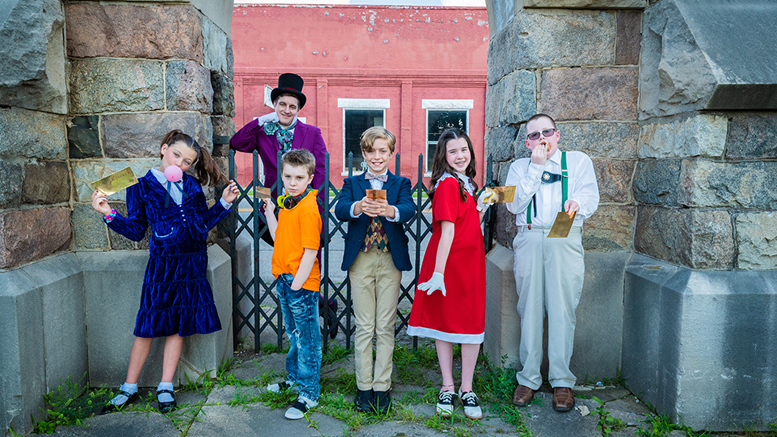 Muncie, IN—Muncie Civic Theatre will open its 2019-20 Season with “pure imagination” when “Willy Wonka” takes the main stage on Aug. 16.

“The story is quirky, confusing, surprising, and a lot of fun,” Duggleby said. “I think this will be a show that will have people cackling in their seats.”

Willy Wonka, a reclusive owner of a magical and mysterious chocolate factory, opens the doors to a select few who have found Golden Tickets, with the hope of finding someone to take the licorice reins of the operation when he retires. The candy-coated adventure also includes some very real life lessons – punctuated by factory employees, the Oompa-Loompas – for children and adults alike.

“We had 112 people audition for this show,” Duggleby noted. “We ended with a cast of 50.  I’m so thrilled with this cast. The people are all kind and supportive and very hard workers. It is a huge honor to be here and to have such a wonderful show. I can’t wait for everyone to see it.”

Ten-year-old Judah Smith, who plays Charlie Bucket, said he went into auditions hoping “I might be able to play Charlie, so I went in with my expectations set high.”

A big fan of the book, Smith describes his character as “a poor boy that lives with his mom, dad, and all four of his grandparents.”

“All they ever have to eat is cabbage soup,” added Smith, a fifth-grader at East Washington Academy. “Charlie Bucket loves Willy Wonka but he rarely ever has money to buy chocolate. He treats others kindly and always tries to think positive.”

Hart said he’s a big fan of Gene Wilder’s interpretation of Wonka in the original film, but has definitely found his own way to bring the character to life.

“I like hinting at the menace below the façade,” he said. “He is a big personality and there are performative elements there, but the factory is a dangerous place and he’s been isolated there long enough that he has kind of forgotten how to interact with people. Some combination of that and his intense focus on finding his replacement, cause him to come across as a bit callous. I hope the ways in which he obliviously disregards the social contract are amusing.”

Hart will be performing alongside his son, London, who is playing technology addict Mike Teavee, and says seeing him grow as a performer has been the best part of process.

“He’s creative and talented and confident in a way I never was at that age,” Hart said. “I couldn’t be more proud of him.”

All of the other Golden Tickets will be there as well – Augustus Gloop (Woody Rutter), Veruca Salt (Presleigh Davis) and Violet Beauregard (Callie Jones) – each attempting to win over Wonka. But if they don’t follow the rules, well, there are consequences.

“It’s definitely a show with a moral,” Hart said. “Every time the Oompa-Loompas sing, they kind of spell it out. A lot of shows will demonstrate either the darkness that can be found in the world or the childlike wonder with which you can approach it. Dahl likes to juxtapose the two to demonstrate that they aren’t mutually exclusive. The world CAN be a dark place. Approach it with childlike wonder anyway.”

As Wonka would say, “Want to change the world? There’s nothing to it.”

Now is the time to get your 2019-20 Season Subscription at Muncie Civic, so you don’t miss any of the great shows, including “Sister Act;” “The Lion, The Witch, and The Wardrobe;” “Matilda;” “Mamma Mia!” and “The Music Man.”

For tickets or more information, go to www.munciecivic.org or call (765) 288-PLAY.