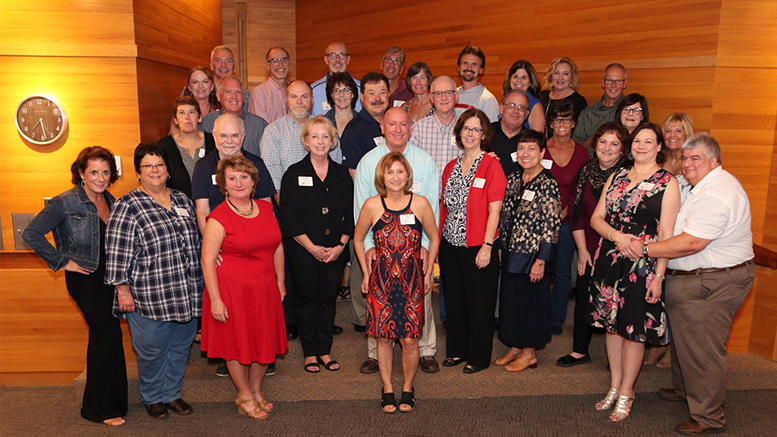 And the kids are alright.

They had come from as close as across town in Muncie; and as distant as Washington, D.C., and St. Louis. Time had passed since they had last been together, with some among the nearly three dozen some odd people not having seen each other for years.

They were friends who were back together for a weekend at their Ball State University alma mater. They arrived on an idyllic September Saturday with laughs, smiles, hugs, kisses, and photos at the Minnetrista Cantina room. For the Hurlbut Hall Alumni Reunion (1977-1982), there were 2½ hours to be spent together for rekindling and reviving longtime friendships, sharing stories, photos of themselves, and creating more memories.

Ann Zondor Hentschel, a 1983 Ball State grad from suburban Chicago who was the reunion’s chief organizer and wrangler, was beaming all night. She admitted a couple days later to struggling a bit after seeing people she considers family.

“I’m having a bit of a difficult time adjusting back to daily life after sharing that powerful connection with so many,” she said.

“When we get together, it feels like no time has passed since those glory days on campus,” said Monica Miller, an Indianapolis resident and a Ball State grad with bachelor’s (1981) and master’s (1994) degrees. “When I tell people I am going to a residence hall reunion, they quizzically ask, ‘A dorm reunion. How fun can that be?’”

If you ask almost anybody who resided in Hurlbut Hall from 1977 to 1982, it was a lot of fun living at the corner of New York Street and Neely Avenue during those days.

Hurlbut and Menk in fall 1975 became the first Ball State residence halls to offer, or as university officials termed “experiment,” with co-ed living accommodations on alternating floors. Because of its co-ed atmosphere, Studebaker East truly differed from any other Ball State residential complex at the time.

“I’m sure fun was had in those halls before us, but now that the hall was co-ed, well, the fun never stopped,” Miller said. “We always knew our Hurlbut Hall experience was different in a good way from most others.”

The sixth-floor lounge of Hurlbut, only publicly accessible by elevator from its glass-encased fish-bowl entrance, was the social hub for the hall’s 200-plus or so residents. Music coffeehouses, talent shows, projector-shown movies, “Dating Game” events, music played on a grand piano, the playing of pool and ping pong, afternoons watching “General Hospital” and “M*A*S*H,” and the handing out of the annual Otis Awards (named after the elevator company) were among the community activities to be discovered there. Those all fostered the homespun atmosphere found in what they affectionately called the Hurlbut Hilton (complete with special hotel-style keychains and specially-emblazoned t-shirts). 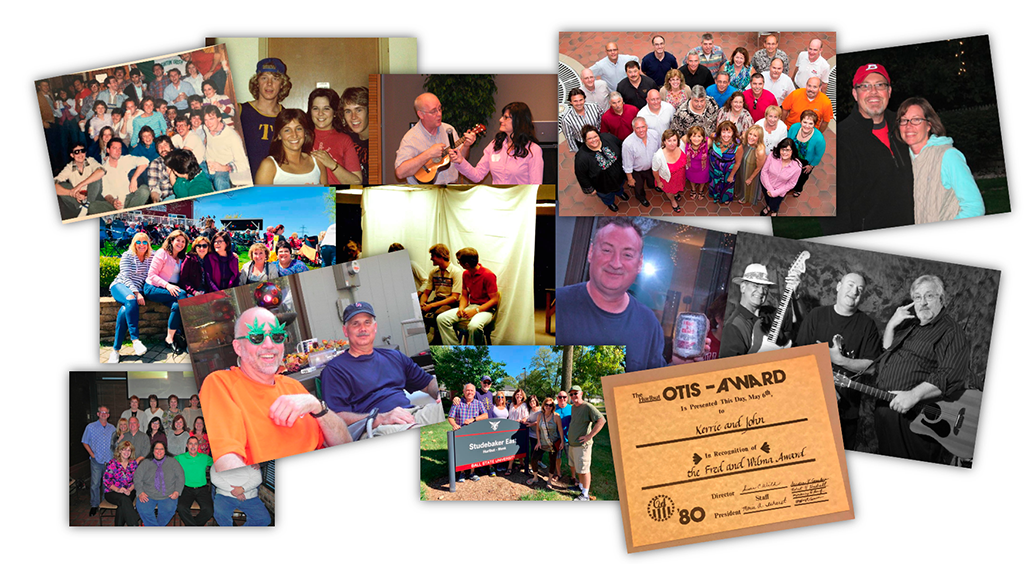 “I remember changing the direction I would take to and from my room,” said Diane Palumbo, a 1982 Ball State grad from St. Louis. “Instead of getting on the elevator and immediately taking the steps down to my floor (on the fifth floor), I would always walk through the lounge first to see who was in there, or to find out what was going on later.”

Musings during a girlfriends’ weekend in New Buffalo, Michigan, is what led to the inaugural Hurlbut reunion in July 2009. Zondor Hentschel and Woods along with Ball State alumni Lisa LeVier-Pyron, Laura McGue Maves, Carol Spires, Sheri Stricker and JoBeth Cruz wondered what many of their Hurlbut friends were up to. So, they reached out to other Hurlbut friends and fellow Ball Staters, Bob Stinson and Steve Weingartner. They were drawn to organize that first Hurlbut alumni gathering, held at the Ball State University Alumni Center. 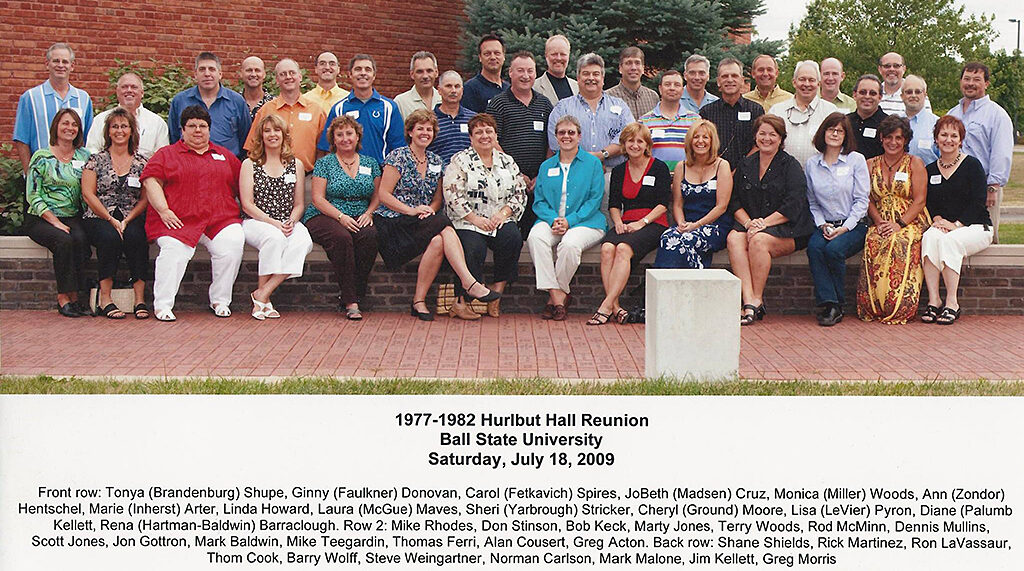 “Hurlbut quickly came to feel like a family and home. We accepted each other and supported each other. I’m sure like any family, there were times we got on each other’s nerves,” said McGue Maves, a 1983 Ball State grad from Noblesville, Indiana.

“It is hard to put into words how thankful I am for the wonderful times we had and the special friendships that endure,” said Stricker, a 1985 Ball State grad from Fishers, Indiana. It’s especially unusual when considering “the random nature of how we all ended up in Hurlbut at the same time.”

There was much effort undertaken to find and reunite Hurlbut’s alumni from that five-year period.

“There never would have been any of these reunions were it not for Google and Facebook,” said Marty Jones, a 1981 Ball State grad from Washington, D.C. “Before they existed, about a dozen or so Hurlbut friends had stayed loosely connected after graduation.”

Few Hurlbut alumni from the period had kept their contact information updated with the Ball State University Alumni Association. Others had drifted away from BSU and their fellow alums.

Nowadays, a private Facebook group for Hurlbut alumni from 1977 to 1982 has grown to 103 members. Also, Ball State alumni with Hurlbut ties registered with the Ball State University Alumni Association has reportedly quadrupled. 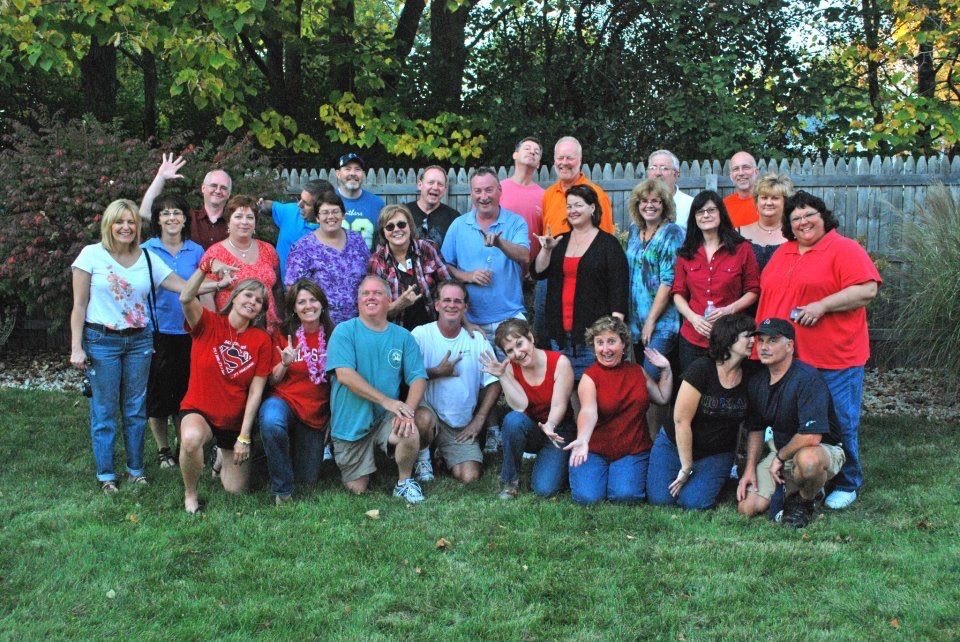 Over the years, Mike and Sharon Rhodes from Muncie had a number of Hurlbut gatherings at their home during Ball State Homecoming weekends. “We had a dorm band at Hurlbut named NightFlight and after that very first official reunion back in 2009, the band members got together again and played during the Hurlbut social gatherings we had at our home,” Rhodes said. “It was so fun to play music with my buddies again. Every year my Muncie neighbors ask me if that band is going to play outside during homecoming again.”

The presence for Hurlbut Hall has changed in the 10 years since the first Hurlbut alumni reunion. In 2012 following extensive renovations, Studebaker East reopened with a solitary entry in Menk Hall and Hurlbut losing its fish-bowl entrance as a result. In summer 2013 as part of their second reunion, Hurlbut alumni toured the redone interiors of what Ball State students now know as Stu East. 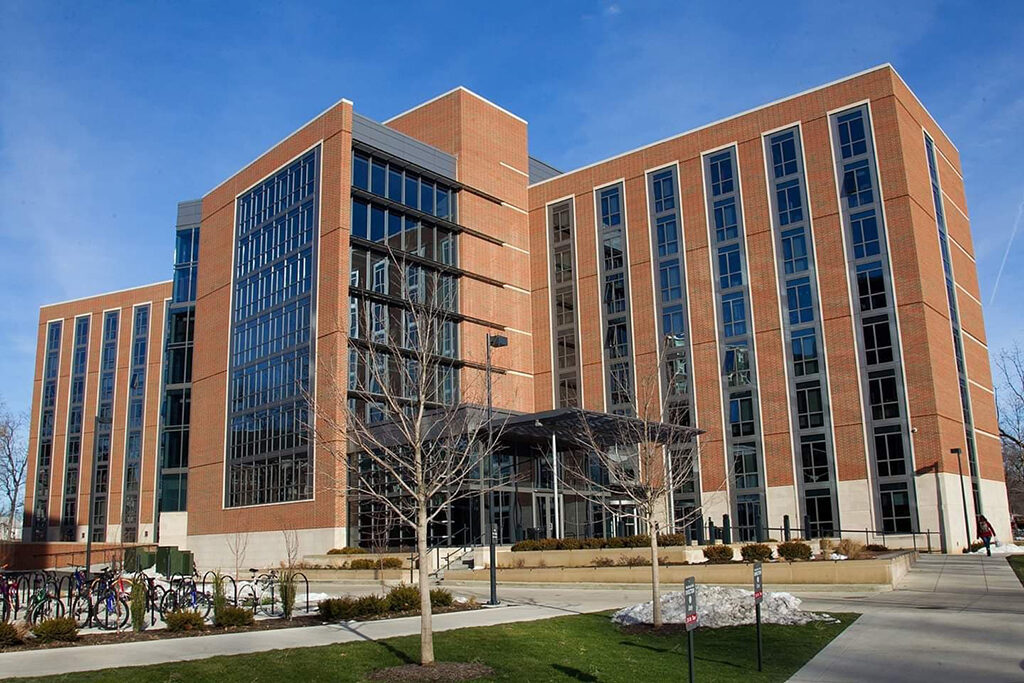 While visiting their alma mater is a draw, being with their Hurlbut alumni means far more because of those ties from four decades ago.

“Seeing everyone is important. These are lifelong friends,” said Scott Jones, a 1983 Ball State grad from Carmel.

John Hoodlebrink, a 1982 Ball State grad from Buchanan, Michigan, said, “They were such a great group of people. There was a connection, almost like family.”

Tom Ferri, a 1982 Ball State grad from Indianapolis, said, “The people were always inclusive and always there for you.”

As part of their third official alumni gathering, some Hurlbutonians, as they call themselves, stopped by their old home and other haunts during a Ball State campus tour. Their activities on what was Parents’ Weekend at Ball State also included a Friday night gathering at Three Wise Men, a Saturday lunch at Mancino’s Pizza & Grinders, the Ball State-Florida Atlantic football game (a 41-31 loss by the Cardinals) at Scheumann Stadium and an impromptu Saturday night coffeehouse at the Holiday Inn Express & Suites Muncie.

The Hurlbut Hall group is pictured taking over Mancino’s for lunch on September 14th. Photo by: Mike Rhodes

Music is part of the special bonds for the Hurlbut alumni. For the 2013 reunion, a couple of Hurlbut alums, Stinson and Marty Jones, put together a two-disc, 33-song CD of music special to those from Hurlbut. Titled “Pink Floy – The Hall,” the release included Pink Floyd’s 1979 hit “Another Brick In The Wall, Part Two,” along with songs played by groups including The Who, The Eagles, The Pretenders, The Knack, Earth Wind & Fire, Bruce Springstreen, Linda Ronstadt, AC/DC, Toto,  Boz Scaggs and Santana, among others. Also included was the 1971 classic by DonMcLean, “American Pie:”

Norman Carlson, a 1984 Ball State grad from White Pigeon, Michigan, was among the handful of musicians and vocalists with Hurlbut ties performing acoustically at the Saturday night coffeehouse. For him, Hurlbut is “like a family. It’s such a diverse blend of people, all caring for each other. It’s a joyful celebration of something that’s unique and special.”

Rena (Hartman) Barraclough, a 1982 Ball State grad from Lebanon, Indiana, admits to not being very connected to the campus and Muncie. Her Ball State links stay because of meeting the alumni where she works and her friends from Hurlbut.

“Many of the people that lived in Hurlbut with me have become lifelong friends,” she said. “As we all grow old, I pray the fun memories from Hurlbut Hall are the last ones to fade.”

Several Hurlbut alumni expressed regrets for having to miss the event.

“I would have loved to see everyone … because of the friendships made in Hurlbut as well as” Menk, said Marie Hanifan Rape, a 1984 Ball State grad from Chapel Hill, N.C., who last visited campus 25 years ago.

Carlye McLaughlin, a 1986 Ball State grad from Fort Wayne, said: “I met such good friends there,” adding her favorite Hurlbut memories include “waiting for friends – and pizzas – in the fish bowl.”

Jakala Greig, a 1983 Ball State grad from Indianapolis, says those who were unable to make the reunion truly missed out.

“These are enduring friendships that have transcended the decades,” she said of Hurlbut. “It was a chance to reconnect with people who shared the best time of my life.”

Greig adds she hopes they “please keep having the reunions.”