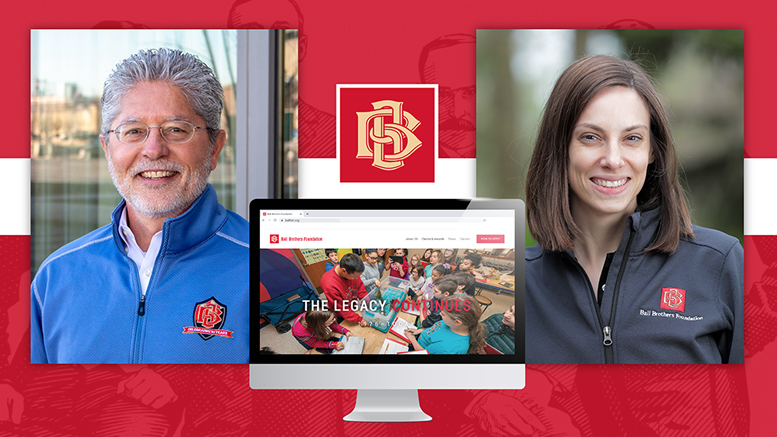 Muncie, IN — Ball Brothers Foundation, which awarded its highest grant payout in history of more than $8 million last year, looks to the future with a strategic board appointment, an internal staff promotion and a website refresh. Dr. Jeff Bird was appointed to the foundation’s Board of Directors, and Jenna Wachtmann was promoted to vice president of the foundation staff during the board’s February meeting.

“As the foundation continues to grow, we are further strengthening our board, staffing, and communications,” said Jud Fisher, president and COO of the foundation.

Bird, president of IU Health East Central Region, joins the Ball Brothers Foundation board as one of four non-Ball family voting members. The non-Ball family board member role is critical to engaging the governing board with a local perspective of the Muncie community.

Bird, who was born and raised in Muncie, has previously served on the board of the IU Health Ball Memorial Hospital Foundation, which focuses on funding hospital and community health initiatives. His portfolio of community involvement includes co-chair of Next Muncie, chair of Delaware Advancement Corporation, and president of the Ball State University Cardinal Varsity Club Board of Directors.

“Jeff is an engaged citizen and a vocal advocate for improving the quality of life in Muncie. He is well-versed in many of the key projects underway in the community, giving him a strong command of local needs and opportunities,” Fisher said. “We are honored to have him on our board.”

In addition to the change on the board, Ball Brothers Foundation announced an internal staff change: Jenna Wachtmann, who joined the foundation in 2014 as a program officer, has been named vice president, a newly created position that expands on her current role.

Wachtmann holds a master’s degree from the IU Lilly Family School of Philanthropy, where she conducted research on foundation giving strategies. She has a background in fundraising and nonprofit management, having worked for social service organizations in several cities.

“Jenna has been a valuable asset to our team for the past six years,” Fisher said. “She has demonstrated great passion and ingenuity, which I’m confident will enable her to expand on her leadership of our staff and efforts within the community.”

In her new role, Wachtmann will support the president and COO role in strategy development, communications and day-to-day management of operations. She will be visionary in looking for new grantmaking opportunities in alignment with community needs and the board’s funding interests. In addition to these new responsibilities, she will continue to work with grantees and partners within the community.

“We had noticed that—especially outside of the foundation and nonprofit sector—there was an opportunity to more completely share the role that Ball Brothers Foundation plays in our community,” Fisher said. “We wanted to tell our story in a visually appealing way while still paying homage to the family history.”

With an emphasis on engaging visuals, the site effectively conveys what the foundation does and the impact its grants have on Muncie, Delaware County, East Central Indiana and Indiana.

To learn more about the types of grants available through Ball Brothers Foundation, visit ballfdn.org.

Ball Brothers Foundation is one of the state’s oldest and largest family foundations. Annually, the foundation makes approximately $8 million in grants to support arts and culture, education, the environment, health, human services, and public affairs. The Muncie-based private foundation gives priority to projects and programs that improve the quality of life in the foundation’s home city, county and state.