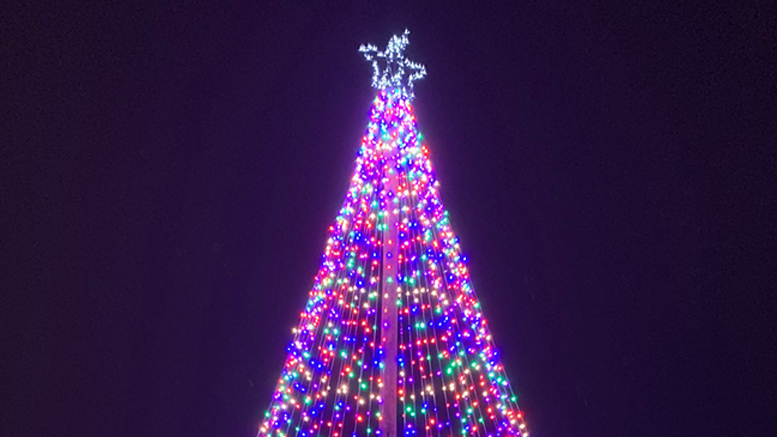 Muncie’s tallest Christmas tree has been lit again and will remain lit every night from dusk until dawn as a symbol of community hope and collaboration. Photo provided

Muncie, IN—Under the direction of Meridian Health Services, and with the partnership of Jay Crew Landscaping and Indiana Michigan Power, Muncie’s tallest Christmas tree was lit again last night and will remain lit every night from dusk until dawn as a symbol of community hope and collaboration.

“We have hundreds of superheroes on the front lines of this crisis,” said Hank Milius, president and CEO of Meridian. “Our hope is that this may help provide belief that there are brighter days ahead.  If it does, then we’ve helped make our community healthier. It’s a small but powerful symbol to remind us there is hope for a brighter future.”

The idea came as Meridian executives saw social media stories about Christmas lights in other communities. “When I saw that families in California were putting their lights back up, it seemed like the right thing to do,” said Scott Smalstig, vice president of development for Meridian, who oversees Meridian’s “Holidays at Gresham” drive through light display each year.

The idea may have been the easiest part, Smalstig explained.

“The real champions of this story are Jason Brooks of Jay Crew, and his people,” said Smalstig. “While Jason was adjusting his company’s new work reality, he was taking calls and texts from me.” 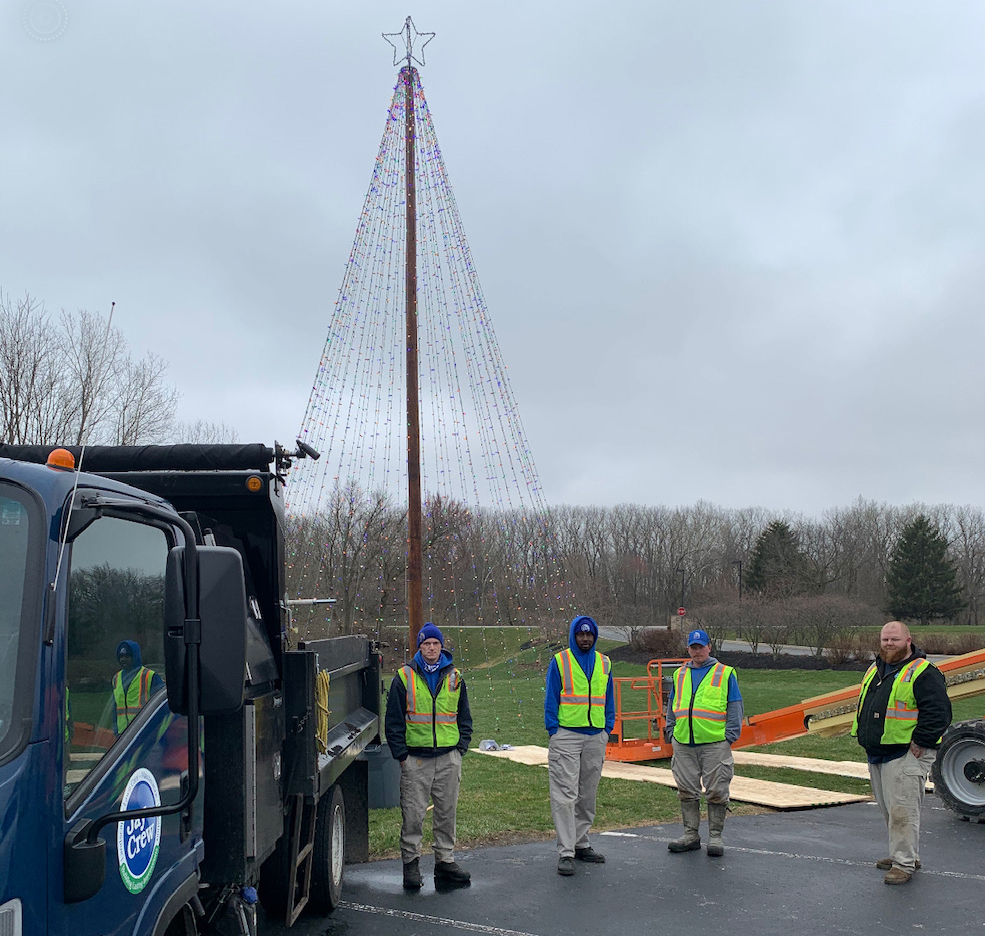 Jay Crew staff are pictured after re-installing the tree on Monday. Photo provided

“It was an easy project to say yes to,” said Brooks.

Brooks, along with Jay Crew project manager Scott Edwards, who initially devised the structural design of the tree, and four other Jay Crew employees, Joseph Bunch, Derrick Pittman, Michael Forehand, Johnny Randolph, and Rick Pedigo, went to work Monday morning and had the tree in place by noon.

“We knew how important this could be, and it went up a bit easier than it did in December,” said Edwards. “This was good practice for us,” joked Edwards.

Not only does Meridian plan to light the tree each night for onlookers from White River Boulevard, but will use the tree to get messages delivered that will help flatten the curve of the spread of the virus.

“If the lights attract those looking for a bright spot in all of this, we will place messages around the tree regarding public safety and public health,” said Beth Clark, vice president of marketing at Meridian.  “Spreading good information, along with spreading hope, is what we are trying to do.”

Clark’s marketing team is working on signage at each Meridian location that will both inform and allay fears of people as they seek medical attention if needed.

“We want people to know Meridian is a source of trusted services and information in this critical time,” said Clark. Messages will include the fact that you can now have virtual visits with Meridian providers, how to protect yourself against Covid-19, how to stop its spread, and what to do if you do start to exhibit symptoms.

Clark pointed out that keeping communication simple and having single points of entry for information will help people the most. Meridian is pointing people to one phone number, 1-866-306-2647, and their web address, www.meridianhs.org, for the ability to ask questions and the most up-to-date information.

How the Six-Story Tree Initially Came To Be

The back story on the how the six-story tree first came to be is worth telling, said Smalstig.

When Rob Keisling, community affairs manager of Indiana Michigan Power, agreed to sponsor Meridian Health Services “Holidays at Gresham” light display this past December, he also began serving on the community committee for the event.

“Our brainstorming had us all wanting to have the tallest Christmas tree in Muncie,” said Keisling, “but none of us had a tree farm with a sixty-five foot Norway spruce, and the artificial variety were just too expensive.”

Keisling then stepped forward with the idea to use a power pole to provide the structure for a tree similar to the one in downtown Indianapolis at the Soldiers and Sailors monument.

“I knew we had the right people around the table to get it done,” said Smalstig. “We have great partners, and Fred Reese (Willowbrook) and Jason Brooks (of Jay Crew), began collaborating on a solution right away.”

Reese has a penchant for the excessive, so the real trick was making sure the tree was structurally sound. Enter Edwards, a project manager at Jay Crew, and the rest, as they say, is history.

“Scott Edwards spent an entire weekend engineering a steel cap for the pole that would support dozens of strands of lights,” said Brooks. He then purchased materials and used the Jay Crew shop to construct the steel cap for the nearly seventy-foot pole.

Once Reese selected the right size bulbs and strands for the tree, the stage was set for the new partner to yet again add to the collaboration. Keisling summoned the Indiana Michigan Power expertise and dedication to the community along with the expanse of their equipment, and the hearts of his employees to pull the project together.

In what would become known as IM Power “Blitz Day,” 30 Indiana Michigan Power employees and half a dozen trucks descended upon Meridian’s Gresham Center in late November to assemble the tree, and help Jay Crew put up dozens of displays and over 100,000 lights.

The “Holidays at Gresham” drew 15,000 visitors this year in December to the Suzanne Gresham Center, Meridian Health’s center for children’s services.

Jay Crew Landscaping and Indiana Michigan Power’s effort and partnership with Meridian Health will continue to shine for our community during this uncertain time.

For more information on CORVID-19 and how to stop its spread, visit meridianhs.org.