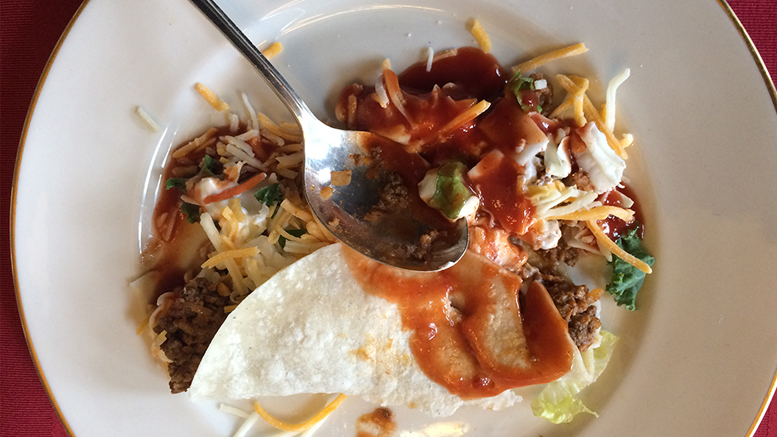 Sure, it tastes pretty good, but it doesn’t look like much. Photo by: Nancy Carlson

The other day I was hurriedly deleting spam posts from my email when one slugged “toco warranty” caught my eye.

At least, I’m pretty sure it did.

Just for the record, I have NO idea what a “toco warranty” is, let alone what protection a warranty for a toco would provide. Still, I was momentarily stunned by the sight of this, thinking that perhaps I had misread it.

“Did that post actually say ‘taco warranty’?” I asked myself, mindful of my personal addiction to them.

Alas, I didn’t check, though I probably could have found it in some “deleted” computer file. But in my whole miserable life I have never looked for something in a computer’s deleted file, and I’m not about to start now. See, as a guy who, on the human pleasure scale, equates acquiring new computer knowledge with acquiring the pain and itch of hemorrhoids, there was no freaking way I was going to go back and look for it.

This did leave me with an intriguing notion, though.

Why aren’t tacos sold under warranty? It’s certainly not because taco warranties aren’t needed. Granted, some places serve up real beauties. On the other hand, in my life, I have also eaten some really ugly tacos.

Just consider this issue in relation to cars. You’re in need of a new car, then a certain make and model catches your eye in an advertisement. You go look at it. You drive it. You hem and haw over whether you should buy it. Then when you finally do buy the new car, it’s presented to you all shiny and bright and fully warranted, right? And this makes you feel good inside.

So why shouldn’t the same be true of a taco?

After all, you think you need that taco, and perhaps several more tacos besides.  You see it advertised on a menu – or will, once we’re allowed back inside restaurants – and it looks spectacular! It’s plump in its yummy tortilla! It’s loaded with tasty meat and sauce. The top is temptingly layered with shredded yellow cheese, semi-crunchy strips of healthy green lettuce, plus a smattering of diced tomato pieces sprinkled across it, shining red as rubies.

In short, it’s a picture of loveliness.

Then your taco comes and you think, “WHAT the HECK?”

That’s because sometimes, tacos bear absolutely no resemblance to those heavenly looking creations so alluringly pictured when you ordered it just a few minutes earlier. No, your taco looks like it spent half the cashier’s work shift crammed into his back pants pocket, waiting for him to take his dinner break.

So what do you do? You morosely drive your taco back home, sadly sighing by way of response to the blatant unfairness of it all. Then you go ahead and eat it along with the other tacos you bought, even though some of them also look like they were trampled by mules. But that whole time you’re chewing, you keep asking yourself, what if my tacos were under warranty?

When you took delivery of your brand new car, if it looked totally banged up with all four tires under-inflated and messy sloughs of clumpy brown stuff dripping obscenely from its exhaust pipes, would you have accepted it?

Same thing with guaranteed tacos! Instead you’d just pull back around, hand your crummy looking taco to the server and say, “Under terms of your taco warranty, I am returning this taco with a request that it be replaced by a taco more closely resembling the one pictured on your sign (or menu).”

And all they would say is, “Coming right up, sir!”

Not that tacos are the sole culinary culprit when it comes to ugly-looking food, of course. I’ve eaten some pathetic looking pancakes before, ones shaped more like the Elephant Man than the pristine stack of wholesomeness pictured on a menu. I’ve downed some ugly looking hamburgers, hot dogs and chickens, too.

And don’t even get me going on raw seafood.  I like oysters on the half-shell, and think they are beautiful in a weird, admittedly sort of nasally way. But once, in a highly touted restaurant about an hour away from here, I was served an intensely unappetizing cup of raw oysters slobbered with cocktail sauce. While the first sight of them was bad enough, it was even worse when I saw them again about three hours later.

Now, given what’s going on in the world today, I know we have far more important things to worry about than the appearance of our tacos. Besides, the truly important consideration is how they taste, right?

Frankly, I’ve never encountered a taco I didn’t enjoy, ugly or otherwise. Plus there’s the fact that once you start eating it, even the world’s most astoundingly beautiful taco – what you might call the “Miss America of Tacos”  – is going to get real ugly real quick.

But as any master chef will tell you regarding the importance of appearance in culinary matters, first we eat with our eyes.

Speaking of some tacos my eyes have beheld, they could’ve used a makeover.