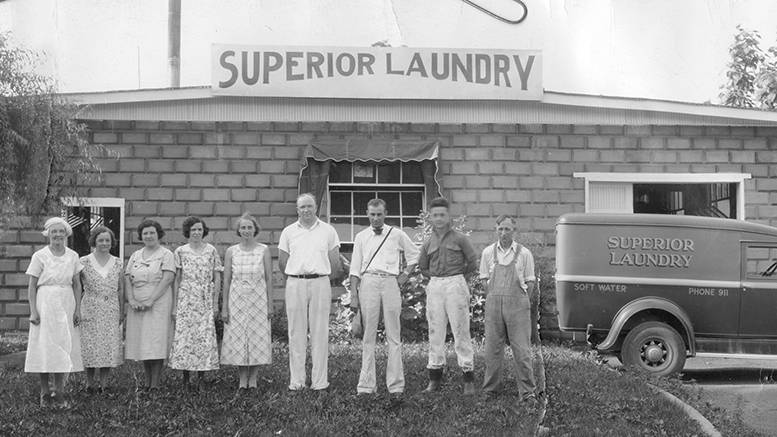 Frances and Charles Marsh stand side by side in the center in front of their business in 1935 in Muncie. On the truck you can see the phone number of Superior Laundry - 911. Photo provided

Muncie, IN—Recently, I took some time to read through the letters my grandmother, Frances Dyke, wrote to her beau (my grandfather, Charles Marsh) while he was away in WWI. She was 21-years-old and teaching high school in the small town of Horton, Michigan. The letters span from October 1918 to early January 1919, and one thing which she writes about is the “Flu.” This was during the Spanish Influenza pandemic which killed 20 million people worldwide, twice the number killed in combat in World War I. 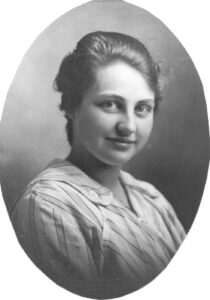 Frances and Charles both grew up in Holland Michigan. She and Charles had attended 1 year at Hope College. Charles had joined the army and Frances was living in a boarding house in Jackson, Michigan while teaching at the school in Horton. They married in 1920. In 1926, they moved here to Muncie where they started Superior Laundry, which they operated for 50 years.

Her school was closed for four weeks during the pandemic from mid-October to mid-November, and the teachers were not paid during that period. There was talk that they would have to have school on Saturdays through the winter to make up the lost time. Over the 3 months, she reports that the flu gets better, then seems to get worse, then better again.

In late October Frances wrote, “The ‘Flu’ is awful in Albion especially in the S.A.T.C. [Student Army Training Corps, similar to ROTC]. They say that the situation is some improved here, but I don’t know where they see it. My uncle and both the little kids are very sick. We have been running back and forth over there and I suppose the next thing we’ll have it in our bunch. It will be a wonder if Dad doesn’t get it because he is so scared. He knows what it is because he’s had the old-fashioned grippe [early term for influenza] so often.” 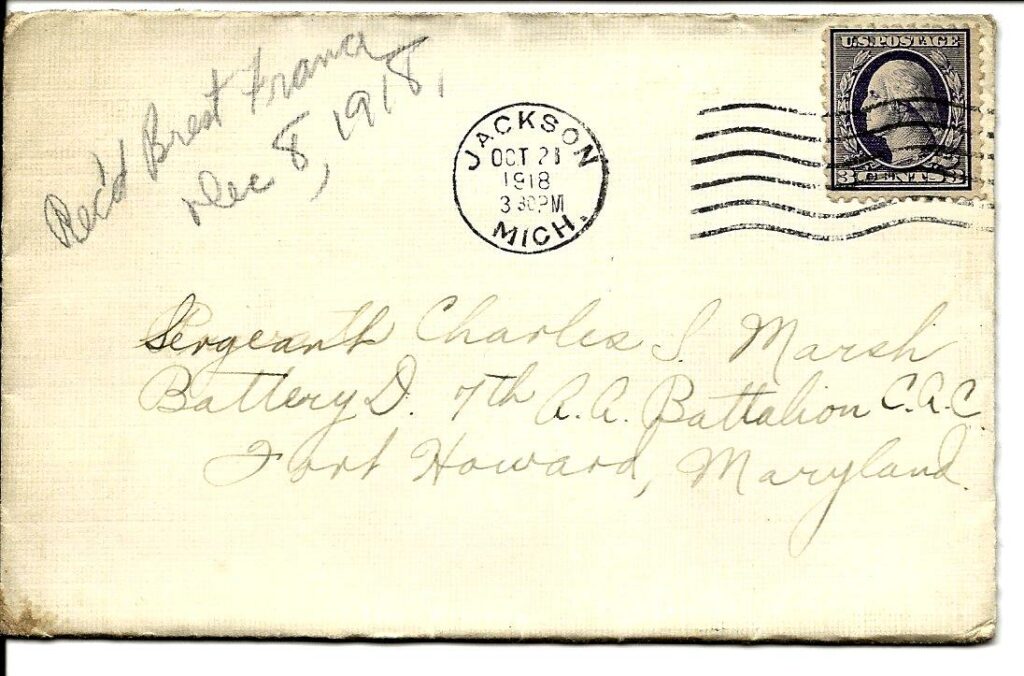 Frances’s letter from October 21 which was forwarded after his unit sailed. Charles wrote on it that he received it December 8 in Brest, France.

While Frances was on “vacation,” she worked to keep busy by sewing clothes, doing chores, going to church and socializing. But sometimes there just wasn’t enough going on. In early November she wrote, “I had so little to do today that I attempted to learn to play the Star Spangled Banner. I almost murdered it, but I’m improving, although it is still a killing affair.”

By late November, they were back in school. “We are teaching school this week after a fashion. The ‘flu’ is worse here now than it was any of that four weeks we had off. But we are not quitting again. Twelve were absent from A.S. today and nine from my room.”

In December, Frances mentions visiting a pupil of hers in the hospital who was sick, and relates a story of taking clothes and food to poor a family. She also said that she was glad to be back to work because she had had “nothing but borrowed money to live on” for four weeks. 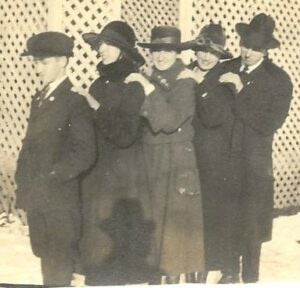 One of 10 small photos Frances included in a letter to Charles. L-R Herb, Esther, Helene (her younger siblings), Frances, and their father, Frank outside the family home in Holland, Michigan in December 1918.

On January 2, Frances wrote, “We could not decide whether we wished to have school New Year’s Day, or have the day off and make it up some Saturday. We finally made up our minds to have school, and we didn’t try to keep it silent that they could not be counted absent because it was a legal holiday. So we didn’t have much school, just put in time.” A couple days later she reported, “The ‘Flu’ is all better in Horton now (just about so many people to get it and then that’s all) but is still quite bad in Jackson and Albion.”

It is interesting that while the flu and the war were topics in her letters to Charles, they did not monopolize them. In fact, the overall tone of her letters in the midst of those trying times was optimistic, and I found that inspiring. Maybe she benefited by not having a 24 hour news cycle, or maybe it was the fact that death from disease was a bit more familiar to them than it is to us today. They had no expectation of a vaccine coming to save them, hence the fatalistic view Frances relates, that in essence so many people will get it, and then it moves on.

Perhaps it was also just the natural optimism of her youth and character.  Frances wrote to Charles about mutual friends, ice skating parties, getting caught in the rain and how she would love to see Paris like he was at the moment (the war was over at that point). So I thought I would leave you on a lighter note with an incident she related to him after her school had started up again.

“Well something exciting happened yesterday afternoon in school. I was very busy trying to hammer out some geography out of those poor nuts [heads]. All the kids in the rest of the room began grinning and looking at one another. The commotion got worse and worse and I started to jaw. It was about the first time I couldn’t find out what was the matter (get their point of view so to speak). Well things went on and finally I discovered what? Well I’d almost lost my best Sunday go to meeting petticoat [skirt-like undergarment]. Then I got their point of view and laughed!! I couldn’t get over it all afternoon!”

John Marsh is a writer, and an instructor of history at the Indiana Academy of Science, Mathematics and Humanities in Muncie, Indiana. His email is jsmarsh@bsu.edu