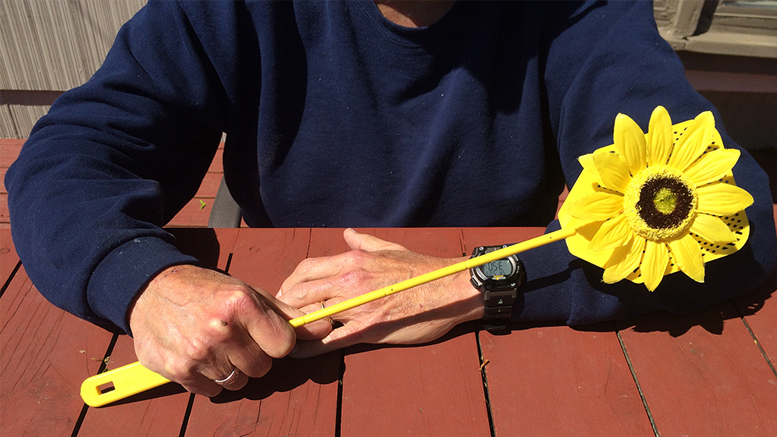 Recently I was heartened to learn of the arrival in the U.S.A. of gigantic murder hornets, because God knows, we don’t have enough crap to worry about already.

Everybody knows we’re facing the COVID-19 pandemic, unprecedented joblessness, increasing hunger and growing unrest in our streets. So now we get murderous hornets the size of buzzards threatening to tear people limb-from-limb, too?

That was my first reaction to the hype surrounding the arrival of Asian Giant Hornets, scientifically known as vespamandarinia, an apparent nod to their preference for Italian motor-scooters. But then I learned they aren’t the size of buzzards after all. They are only about two inches long. As hornets go, however, this makes them whoppers, with stingers that can go right through a beekeeper’s protective suit. And another thing. You know how hornets are normally so cute? Yeah, me neither. But these hornets, with their big yellow-orange heads and protruding eyeballs, are particularly homely, with faces only an Asian Giant Hornet’s mommy could love.

Why are they here? It’s believed they hitched a ride across the sea on a freighter to take up residence near Seattle, probably in search of better cappuccino. Their life cycles start in April, but it’s not until late-summer through early-autumn they statistically qualify for the status entomologists officially classify as “a gigantic pain in the a**.” Still, given the distances involved, it will likely be a while before they ditch their souvenir Seahawks football jerseys and mosey out here to Indianapolis Colts country. But will we even know when they arrive?

Oh, yeah. Trust me. See, you know how when certain sneaky-yet-deadly insects bite a person, sometimes the victim doesn’t even realize it until he’s practically toast?

That ain’t how it works with Asian Giant Hornets.

During my comprehensive research for this column, which involved spending nearly twenty minutes on Google, I watched a guy allow himself to be stung by an Asian Giant Hornet. Now, this guy was a dead-ringer for my childhood hero, Jungle Larry from Cleveland TV’s old “Captain Penny Show.” Jungle Larry was a man’s man, a guy so tough, we kids believed he bit the heads off black mambas for breakfast. But this other guy? Two seconds after being bit by an Asian Giant Hornet, he was squealing like a little girl whose Ken doll had just run off with her best friend’s Barbie. Besides that, at the site of his bite, he had a goose egg as big as a goose egg.

One article I read said not to sweat it, though, because Asian Giant Hornets don’t normally go after humans, and when they do it takes multiple stings to kill you. On the other hand, another article said the hornets kill an average of fifty people a year in Japan.

It went on to explain, however, that these folks were asking for it.

As a person who briefly considered majoring in anthropology, I know people of different cultures enjoy devouring different foods. In America, for example, certain rural gastronomes love chowing down on grilled “mountain oysters,” otherwise known as hog nuts. On a couple occasions, while patronizing certain downhome drinking establishments, even I have feasted on hog nu … er … mountain oysters.

Well in Japan, it turns out many folks consider Asian Giant Hornets a “pleasant snack” when impaled on skewers and pan-fried. Also, their natural juices are considered an “invigorating” additive to cocktails, mostly by guys looking for a manhood booster providing a “warm, tingly sensation” – and I think I can guess precisely where – from the liquor’s extra kick.

What can we deduce? It seems only reasonable that Asian Giant Hornets are pretty bummed about being appetizers and aim to exact any measure of revenge they can.  If I were an Asian Giant Hornet and people were impaling and pan-frying my pals, I’d probably want to kill somebody, too.

But the truly terrible thing about Asian Giant Hornets isn’t what they do to people. It’s what they do to bees, those now-endangered little critters who were recently declared the “most important living beings on earth” for their propensity to pollinate our food crops. Even Albert Einstein once said, “Without bees, we’re screwed,” or words to that effect.

So it’s bad enough that Asian Giant Hornets break into beehives like switchblade-wielding teenage hoodlums, throwing their weight around and making snarky sexual advances to the queen bees. What they do next, though, is prove they’re the Ted Bundys of the insect world, decapitating all the bees they can lay their grubby little feelers on.

All this has me preparing for the day when the first Asian Giant Hornet shows up at my door. My welcoming party is going to include the stoutest fly swatter I can buy, plus a full can of knock-down hornet spray.

If that doesn’t work? Guess I’ll just run like heck.