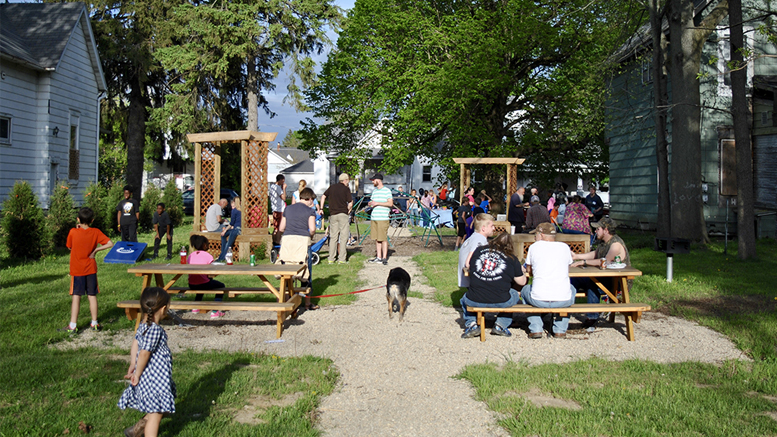 MUNCIE, IN—Muncie Habitat for Humanity serves as the convener of the 8twelve Coalition, a neighborhood revitalization initiative serving South Central and a portion of Thomas Park/Avondale neighborhoods on Muncie’s south side. Recently, this coalition received two national awards from Neighborhoods USA (NUSA) for its work.

The Coalition received 3rd overall place in the Multi-Neighborhood Partnerships category, which features projects that are jointly produced by at least two neighborhoods or community organizations in a partnership effort, addressing either physical or social concerns. Special accolades were also given to the 8Twelve Newsletter, which earned 2nd place in the Non-Profit Organization category.

“We are so grateful for all of the partners who work with residents to realize the change they desire for their neighborhoods,” stated Jena Ashby, Director of Impact & Programs for Muncie Habitat. “These awards truly belong to the residents who continue to show up and bring to life the gifts and dreams of their neighbors.”

The ultimate goal of neighborhood revitalization is to improve quality of life, which is defined as a sense of well-being and happiness experienced by individuals, groups and communities. In 2015, Muncie’s Habitat for Humanity, responding to local need and synergy, spearheaded the creation of the 8twelve Coalition. This area is made up of just under 800 households and includes sections of South Central and Thomas Park/Avondale neighborhoods. While economic statistics for this area paint a dismal picture, these neighborhoods were not chosen as a focus for revitalization for their problems – but rather, chosen for their existing assets and potential.

The 8Twelve Coalition was formed to bring residents and various non-profits together to change that narrative and make plans for a brighter future. Beginning in 2016, the committee of neighbors, non-profits and governmental organizations spearheaded neighborhood revitalization efforts, including the creation of community parks, organization of clean-up events and overall community-building endeavors.

You can learn more about the 8twelve Coalition by following them on Facebook  at www.facebook.com/8twelvecoalition/or visiting their website at www.8twelvemuncie.com.