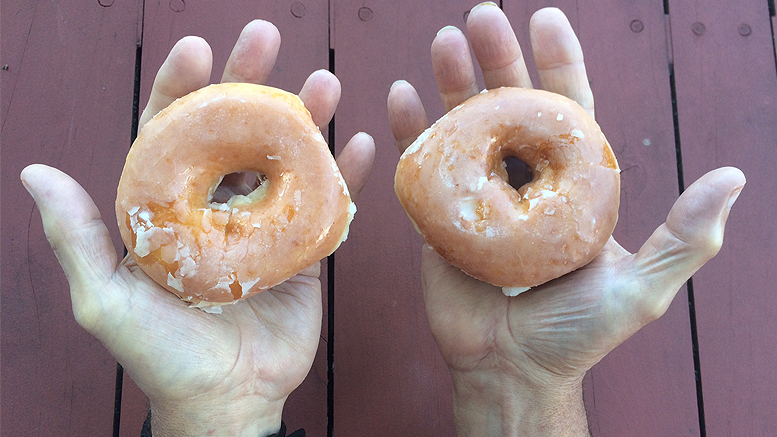 Did Krispy Kremes and a burger launch fair-food weirdness? Photo by: Nancy Carlson

This summer’s unprecedented cancellation of the Delaware County Fair and the Indiana State Fair has come as a blow to many, including those of us who, not having grown up within sniffing distance of a farm, know little of the rural life’s magic.

Oh sure, we have an inkling of what we’re missing.

Herds of chickens, serenely ambling in from the fields at dusk. The joyous mooing of cows, frolicking in the mud after being sheared. The plaintive bleating of horses at milking time.

But who am I kidding? What I’m really going to miss is the fair food.

Will that include the food at our county fair? Sure. Nancy and I always enjoyed a hunk of cornbread and a bowl of bean soup, liberally doused with hot sauce and handfuls of chopped onions, at the fairground’s Dinner Bell diner. Other vendors’ breaded tenderloins and Italian sausages enticingly curled on a hot grill were fine, too. And when a lighter repast was in order, you couldn’t beat the wholesome country goodness of a couple deep-fried Snickers bars.

This summer won’t be the same without them.

Yet, for the record, it often seemed like concessions at the Delaware County Fair were the model of good health and nutritional respectability, compared to what they fed you just down I-69 at the Indiana State Fair. That’s not to say there wasn’t outstanding food there, too. There was. Donning a long skirt, muslin blouse, and mop cap like the other ladies, Nancy worked last year as a volunteer server in Candy Yurcak’s Pioneer Village kitchen. Patronized by the village’s sawyers, weavers and string musicians, the eatery’s downhome vittles included ham, biscuits, baked beans, potato casserole and peach cobbler. It was plain food. Good food. It was food that an industrious farm wife would serve a hard-working, 19thcentury threshing crew, hired to bring in her farm’s crop of wheat and oats. 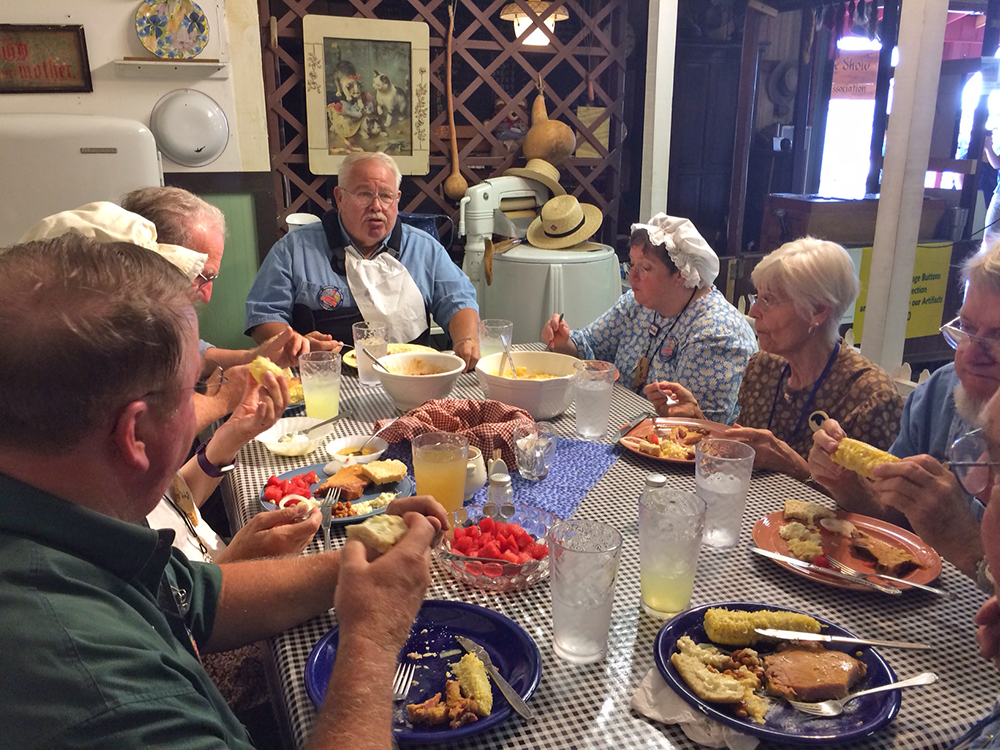 Old-timey fare is the favorite of diners in the Pioneer Village. Photo by: Nancy Carlson

Seeing Nancy in her outfit, I could almost picture her addressing a kitchen full of famished farm hands. “You boys eat up now!” she’d bark, good-naturedly, “or else no dessert for y’all!”

“What IS for dessert, ma’am?” they’d politely inquire.

“A giant, deep-fried Gummy Bear!” she’d answer, to stunned silence. That is when, as this imaginary dialogue played through my mind, the spell cast by thoughts of olden-days cookery would abruptly be broken.

The pertinent question lately has been, is modern fair food actually food? It was probably ten years ago when, with my buddies Lathay Pegues and Kurt Hostetler, I went down to find out, covering the edible side of the Indiana State Fair and learning just how far fair food had progressed. Or maybe regressed.

What beckoned us was rumors of the newly-developed Krispy Kreme Burger, it being a hamburger sandwiched between two Krispy Kreme doughnuts. Had I simply ordered what the name implied, I think I’d have loved it. But ever since I’d been old enough to identify as a hopeless hamburger addict, I’d ordered my burgers with ketchup, mustard, pickles and onion, and figured, why stop now?

The answer to that question came with my very first bite. Or more accurately, when my first bite hit my belly, causing it to do something akin to a hammerhead stall, immediately followed by a series of snap rolls, before threatening to charge back up my esophagus and revisit the scene of this culinary crime.

As it turns out, that was back in the Gustatory Age of Enlightenment compared to now. Researching a weird fair-food site recently, the same source that informed me of the giant deep-fried Gummy Bear’s existence also heaped praise upon Spaghetti Ice Cream.

No, that’s not a misprint. All I could think was, what’s it topped with? A cherry, some nuts and whipped meatballs? But even an abomination like Spaghetti Ice Cream pales in comparison to the array of new “foods” that – unlike perfectly acceptable deep-fried Snickers bars – demonic sickos at this very moment are perfecting for the day fairs return.

I’ll be frank. This I find personally offensive. Beer should not be chewed. If chewable beer is here, what’s next? Pretzels you suck through a straw? Lord help us. But other deplorable examples nearly reach the same godless depths of depravity. There are deep-fried jelly beans, which also offend me. Deep-fried Jell-O. And deep-fried Kool-Aid, for crying out loud.

And we haven’t even mentioned the little critters poised to enter the fair food snack picture. How does chomping tasty handfuls of deep-fried scorpions sound? Yeah, that’d be some good eatin’. Guess you can take comfort in the fact they’re from way out Arizona way, though. But don’t tell me some insane yet enterprising Hoosier snack-inventor isn’t already pondering his chances of success with deep-fried stink bugs. I can see the signs now: “Satisfyingly crunchy! Loaded with nutrients! Infused with all the taste-tempting bouquet of your grandfather’s old underpants!”

Faced with such horrendous fare, you feebly protest, “No thanks! I’m watching my cholesterol!”

Finally, there’s this: SPAM curds. That’s right, SPAM curds! Which, now that I think about them, sound pretty darned delicious, especially compared to this other stuff.

Yeah, whoever invented SPAM curds? The guy’s a freaking genius.