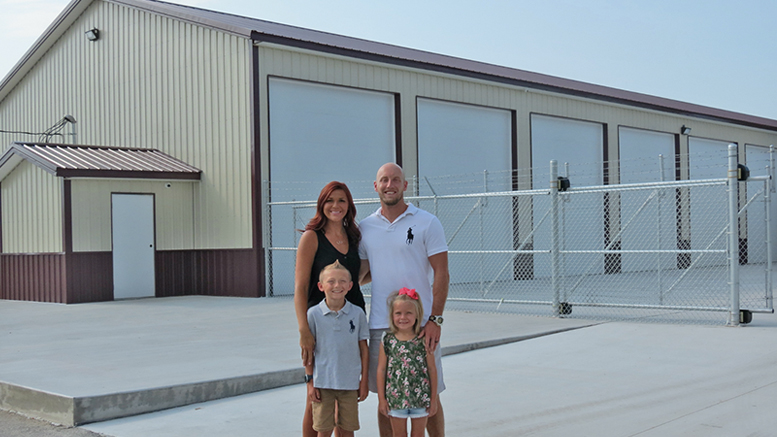 DELAWARE COUNTY, Indiana – When Joshua and Sarah Shaffer looked for a place to store their new RV for the winter, they couldn’t find one within a two-hour drive.

So they decided to build a facility for indoor recreational vehicle storage, right in their home town of Albany, Indiana.

Family First Indoor RV and Boat Storage, the Shaffers’  new, built-from-the-ground-up business, opens at 1090 W. Walnut Street – along Indiana 67 in the town of Albany – with a ribbon cutting and open house set for 5-7 p.m. Tuesday, September 1, 2020.

The new facility consists of two buildings with a total of 30 bays for RV and boat storage. The all-indoor storage areas range from 14 feet by 40 feet to 18 feet by 54 feet and monthly rental ranges from $300 to $475, with an additional $50 if the customer wants their space heated. Other, in-between sizes are also available.

The Shaffers, who have two children, Xavier (8) and Blakely (5), are lifelong residents of the Albany area. Joshua’s family have farmed and raised livestock in Delaware County for more than half a century. The Shaffers are graduates of Monroe Central High School and have been married since 2010.

“My wife and I bought our first camper last fall and we didn’t build a pole barn, but we wanted to store it inside,” Joshua said. “There was an extensive wait list to get it into storage at the Delaware County Fairgrounds. We started searching for other inside storage and the closest we could find was north of Angola.

“After driving up to get it in the spring, I told my wife, ‘We are building storage units.’”

Joshua Shaffer said the business – and its name – was perfect for them.

“We’re family people,” he said. “We vacation with our kids and we’re family first, and we think a lot of people in the area feel the same.”

Shannon Henry, a longtime Albany official and a Delaware County commissioner, agreed that indoor storage for large boats and campers can be nearly impossible to find in the area.

“We have lots of storage facilities here in Delaware County, but I don’t think there’s any of that size that can hold large vehicles,” Henry said. “This is kind of unique.”

The Shaffers considered some existing buildings in Albany, including the structure on the property where they ultimately built Family First Indoor RV and Boat Storage. The property had been the site of the Albany Ford dealership and service center for decades, until well into the 1970s. More recently, it was the site of T&T Tool and Stamping, which closed a couple of years ago.

“Initially we went in with the intention of using the building, but with the way the steel beams were set up, we could only get four bays in,” Shaffer said.

The Shaffers bought the property in March, razed the old building in April and began construction of the two new buildings in June, with work being completed in time for the September 1 ribbon cutting.

Each building is 224 feet long and each storage unit has its own bay entrance with secure access. The property is fenced and the gate operates with a key card, offering 24-hour access.

The property is adjacent to McDonald’s and close to other downtown Albany businesses.

Albany Town Council member Steve Hall said town residents and officials are pleased with the way Family First Indoor RV and Boat Storage looks and how it represents the town.

“The property looks nice, the business looks nice,” Hall said. “It’s an asset as you come into town.

“We have storage units in town, but the Shaffers’ business is geared for boats and RVs, and that offers a different opportunity for people. Anytime you can take sites not in use anymore and make those productive venues and get them back on the tax rolls, that helps the town’s assessed valuation and tax base.

“We’re glad to see that business come into town and that company investing in Albany,” Hall added.

Henry said the new facility “will have people coming from all around, bringing their motor homes for storage, stopping by our restaurants and visiting the downtown.”

Clyde Shaffer also owns the former McCormick Brothers Company building, one of the largest industrial structures in Albany. McCormick Brothers made kitchen and refrigerator fixtures for most of the 20thcentury, closing in the early 1970s. Since that time, a paper products company used a portion of the building.

Clyde Shaffer has plans to open a wedding venue and catering business in the McCormick building.

“Albany’s always been our town,” Joshua Shaffer said. “Putting money into it just made sense.”