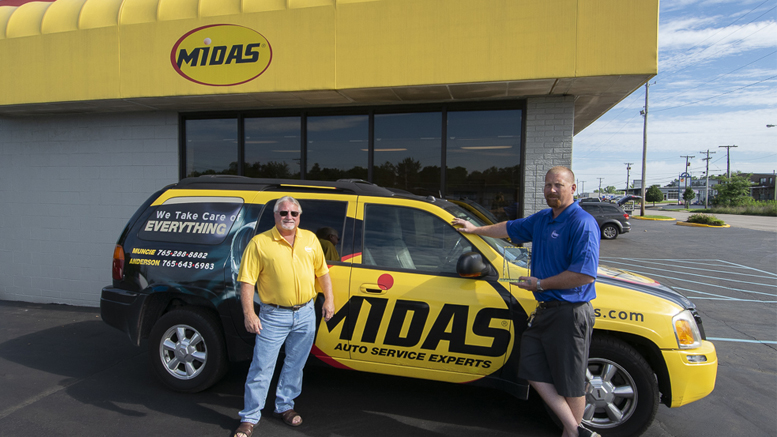 Pictured L-R: Jack Surface and Mike Hylton outside of the Midas Shop on Broadway in Muncie. Photo by: Mike Rhodes

Muncie, IN— Franchisee owner Jack Surface has won a prestigious Franchisee of the Year award from Midas, an American chain of automotive service centers headquartered in Palm Beach Gardens, Florida.

Three franchisee awards are awarded by Midas: a single shop owner, a 2-5 shop owner, and anyone who owns more than 5 shops. Surface owns two shops—one in Anderson and one in Muncie.

The award is presented based upon criteria such as customer relations, customer complaints. sales, community involvement, and peer review by other Midas executives.

Surface says his CSI numbers (customer service index) are always among the highest in the country.

“This is the first time I’ve won the award since I bought the businesses,” Surface said. “Back in the early 1980’s, I used to be a general manager for the Anderson, Kokomo and Marion, IN Midas shops, and our dealer at that time won the award also.”

Surface says his Muncie shop has been the top Midas shop in the state for almost 18 years straight and his commitment to “giving back to the community” helps keep him in business. “The community supports us so much, so we try as hard as we can to support the community and give back where we can,” said Surface.

Local organizations  Midas supports include: A Better Way, Champions for a Safe Community including 100 Men Who Cook, Muncie Mission, local  sports organizations and many others.

“Our community involvement is one of the main reasons we received this award from Midas,” said Surface. “But if it weren’t for Mike Hylton and the people that work for me, this award would never have happened. My people won us this award for us.  Not me.”