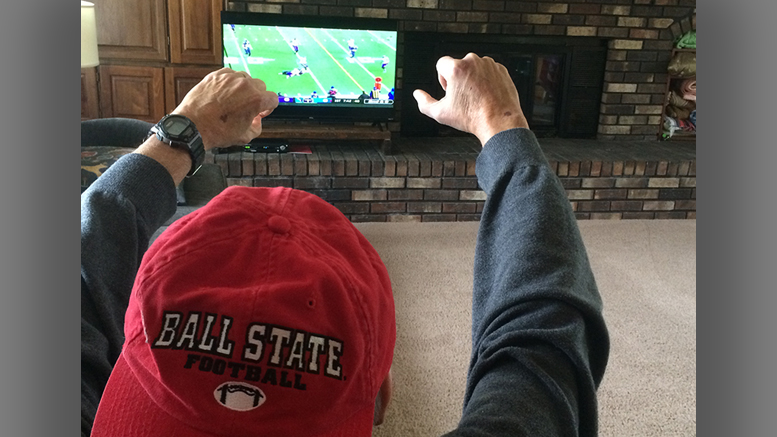 Football games on television can spur the lowest lows and highest highs. Photo by Nancy Carlson

Many red-blooded American wives are gratefully anticipating the end of their annual football widowhood, if not for the return of their husbands’ company, then for the fact they’ll finally get back their television sets.

You can’t blame them.

It’s been a long row to hoe, proverbially, but they’ve toughed it out.

Despite the raging COVID-19 pandemic, Nancy nor I have suffered a sniffle. Due to her diligence, we have maintained social distancing, masked up whenever we venture outside and, the vast majority of the time, stayed home. It’s been made bearable by her companionship, her harmonious attitude, and the daily spirit of Christian love and care which she brings to our marriage.

And one more thing, as already hinted, has saved me from the depths of depression …

It’s been kind of odd. Back when baseball was on TV, I took one look at those stands occupied by the dopey cardboard cutouts and couldn’t get into it. Auto racing? As an IndyCar addict I watched every lap I could, but the sight of an empty Indianapolis Motor Speedway during an Indy 500 run in the witching month of October nearly did me in. Basketball? As a non-native Hoosier it’s fine, but I’d still rather just eat a big breaded tenderloin.

It has been a font of life.

The total absence or scarcity of the crowd, depending on the venue, hasn’t bothered me a bit. On a typical Sunday I’ll be watching the Colts, but whenever an opportunity presents itself, flicking the clicker for a quick look-see at whatever other game is playing. Soon as one game ends, I’ll move on to another.

Such selfless dedication to a task is prized by employers.

By wives, not so much.

I guess I can see why. During these times, like many guys suffering from a serious football addiction, I sink into a sort of gridiron coma that has nothing to do with the number of empties piled beside me. Nancy could say, “Honey, the house is on fire,” or, “Sweetie, a burglar in our driveway is loading a bunch of our stuff into his car,” or, “John, I think our dog has rabies.”

My response would be, “That’s nice, dear.”

But let some Colt get called for an illegal block, and I begin hollering like the first guy on the Titanic who spotted that iceberg. Suddenly a tsunami of beer is sloshing over the rim of my glass, soaking my paper plate of Cheez Doodles into a slimy, disgusting, neon-orange mess. This is a result of our floor shaking from the shock waves. The shock waves are a result of my angrily pounding the couch cushions on either side of me while crying “Why God? Why?” in a pitiable expression of frustration, displeasure and betrayal.

For the first game or two of the season, hearing me woefully screaming stuff like that, Nancy yelled frantically from her home-office one room away, “Do you need an ambulance, darling?!?!?”

By the fourth game, she just sat in there rolling her eyes and sneering, “Dimwit.”

Of course, the depth of emotion inherent in my reaction is hardly my fault.

Based on careful self-observation and my extensive knowledge of lower-class male psychology, I’ve determined that football played in times of deadly pandemics truly heightens your average fan’s reaction to the game.

Take when my team plays. It’s primarily the Colts (may they Rest In Peace until next season), but also the Brownies and the Packers, with whom I share a tawdry flirtation. When they win, I’m happy.

Now, don’t get me wrong. I’m not enough of a football dork to mean the winning-half-a-billion-bucks-from-the-Powerball kind of happy. That would make me far happier. But it’s pretty much like the walking-around-whistling-“Zip-a-Dee-Doo-Dah” happy, and that’s fine, too.

However, when my team loses?

My sense of loss and betrayal knows no bounds. Four-letter words fly from my mouth like flecks of corn kernels from a talkative messy eater, and I don’t mean words like “dang,” “darn” or “poop.” Plus I begin to get morosely somber and reflective, wondering after seventy trips around the sun, does my life even have meaning anymore? Or am I just a jiggling, existential blob of nacho cheese-digesting fat, gristle and assorted gross body-parts?

Of course, with their next win, crisis averted!

So unless you’re, say, an unfortunate Jaguars or Jets fan, the highs offset the lows. And I’d be remiss if I failed to note the additional outright joy that watching Ball State’s Cardinals spank San Jose State’s mighty, mouthy Spartans engendered.

For all I know, BSU has a butt-kicking tiddlywinks team, but only football could have made a hick like me as proud and happy as I was.

And while I’m at it, since I’m not some smarmy sexist, it should be noted that plenty of women are intense football fans, too. You see them at games. You see them at The Fickle Peach and Guardian Brewing Company. You read them commenting about Colts games on Facebook.

Encountering them, all you can do is shake your head and think, welcome to the misery, ladies … and also the joy.