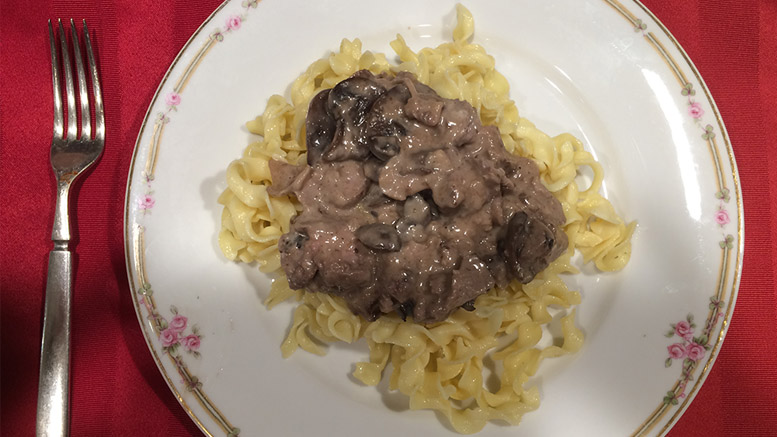 When it comes to enjoying steak, diners should keep an open mind. Photo by Nancy Carlson

In meat matters it’s the Big Kahuna, right? The Top of the Heap! Numero Uno! The Prince of Protein! The Maven of Marbling! The …

Well, you get the idea.

While I’ve eaten some great steaks in my life, I’ve also eaten some lousy ones, so I’d say I’m batting about .400.

This would make me a super-star in baseball, but in terms of steak? Not so much. That’s because when it comes to my favorite meat, which is a delicious patty or two of grilled hamburger served on a bun, I have a batting average of .950 or so. Whether you’re talking about a three-hundred buck Japanese wagyu beef burger (not that I’ve ever eaten one) or some White Castle cheese sliders seductively tucked into their little cardboard sleeves (of which I’ve snarfed down hundreds), I love them all.

But to live, as they say, is to learn. The other day I got to thinking about beef’s role in my life  and decided it was time to learn how to cook a delicious steak. See, in all my seventy years, I could count the steaks I’d cooked on the fingers of one hand. How did they turn out?

Hmmm, what are the exact words I’m looking for?

So I punched up “how to cook a delicious steak” on YouTube, and it was an eye-opener. While hardly what you’d call complicated, its necessary steps were precisely laid out, and I was determined to follow them to the letter.

First, one was instructed to pull the steaks from the fridge and let them rest for a half-hour before cooking, so I did. Half an hour later they appeared to be relaxed and content, though I’m not sure what they would have looked like had they been fussed-up and hyper. They were, you know, just chunks of meat.

Then I had to pat them down to get all the moisture off, and did that, too.

“What’s next?” asked Nancy, who was hanging around to make sure that, as a result of my general incompetency, I didn’t accidentally blow up her kitchen or anything.

“I gotta rub oil on them,” I answered.

Two seconds later, she had a bottle of oil sitting on our kitchen counter.

“Heh-heh-heh,” I chuckled with barely restrained mirth. “Ohhhh, Nancy, you and and your charmingly bumpkinish ways! I meant extra-virgin olive oil.”

Pausing to duck as the bottle of corn oil flew harmlessly past my head and ricocheted off the Instant Pot we haven’t used in a year, I pulled our olive oil from a cupboard and set about rubbing it into both steaks. Then I sprinkled them with my patented mix of sea salt and pepper, taking care to flatten out the little peppery clumps that formed in the oil like mysterious meat growths.

At last, it was time to cook!

Slavishly conceding my steak instructor’s infallibility, I had earlier warmed our oven to her recommended temperature of 375 degrees, at the same time setting a cast-iron skillet on a burner cranked up to level 10. It had taken me a while to fumble my way to this point in the cooking process, but that was OK. The instructor said to get that skillet hot!  Reprising a technique I had mastered three seconds earlier, I sprinkled drops of water from my fingers onto the hellishly hot skillet, where they rolled like tiny marbles before evaporating.

Then I laid our steaks in the skillet and jumped back.

You know, you’d think after a guy had lived in a house for six years, at some point he would have asked his wife, “Honey? How do you turn on the stove’s exhaust fan?” But I hadn’t. Now, I couldn’t even see the steaks, so thick were the billowing clouds of pungent smoke erupting from the skillet. Feeling her way to the stove, Nancy blindly began thumbing buttons and was finally rewarded with the reassuring whir of the fan doing its job.

Speaking of which, I still had a job to do, too.

Having moved the skillet from the burner into the oven, I quickly cut some pale yellow chunks of butter from a stick of the stuff with my right hand. At the same time, using my left hand, I stabbed the steaks with a meat thermometer.

To my horror, they read 130 degrees on my first poke! They had nearly reached the ideal temperature for medium-rare in no time!

Assured by my instructor the steaks would attain their optimum doneness of 135 degrees all on their own, I returned the skillet to the stovetop. Dropping the butter chunks into it, I grabbed a spoon and began basting the steaks with the melted juices, just like “how to cook a delicious steak” had shown me.

Finally, I proudly bore them to the seats at our dinner bar.

Having plated those two beefy beauties, I poured us each a glass of tasty merlot from the plastic spigot of a fine box of wine, then toasted my own reincarnation as a guy who could now cook a delicious steak. “Here’s to a brand new me, culinarily!” I effused, then began to chew.

And chew … and grimace … and chew some more.

Looking at Nancy in disbelief, I confessed, “My steak sucks! Does yours?”

“Oh, I wouldn’t say that … necessarily,” she answered, by way of comforting me.

Twenty-four hours later, chopped into itty-bitty pieces, my steaks perfectly complemented the mushroom cream sauce in Nancy’s killer Beef Stroganoff, as seen in the photo above.