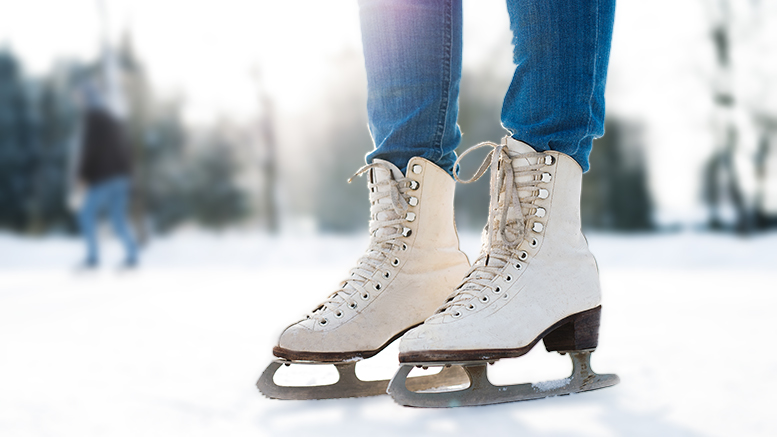 Major life changes happen while you’re ice skating, not all of them good.

Every year about this time, winter’s last gasps remind me how happy I am to be too old to ice skate.

As kids, my sister Patty and I skated a lot.

Home being right off Lake Erie in northern Ohio, where winters were invariably a pain in the tush, our city operated two municipal ice-skating rinks. These were fine facilities, with buildings for skaters to warm themselves in, hot chocolate on tap, and Zamboni ice machines to keep the surfaces smooth as glass.

The idea, I think, was to divert us from the pristine ponds and rivers our parents and grandparents had skated on. My, how things had changed. For kids of the 1950s and ‘60s, it was the dawning of the years when Cleveland’s Cuyahoga River caught fire, and parts of Lake Erie were colored orange by chemicals that could transform guppies into Godzilla. As a result, among some of us there was a sneaking mistrust of natural bodies of water. We thought if you fell through the ice in water up to your waist, you had five minutes to extricate yourself before your plastic snow-pants began dissolving.

But with the exception of an occasional sprained ankle or bloody nose from a face-plant on the ice, our rinks allowed us to skate without injury.

Early on, I learned skating could still cause emotional injuries.

My first emotional injury occurred the Christmas morning I ripped into the box containing my eagerly awaited pair of … figureskates?

For a few minutes I stared wordlessly at them. Having asked for skates, I just assumed my folks knew I meant hockey skates. It was the hockey skaters who dominated our ice rink, after all. They rocketed around it like fleet-footed hoodlums, daringly weaving between the screaming girls and their nerdy boyfriends who were skating to sappy love songs sung by teen idols like Bobby Vinton.

Being the sort of short, fat dork who turned girls’ stomachs, I desperately longed to join the fleet-footed hoodlums.

But now, on Christmas of all days, cruel fate had landed me among the twerps, kids who eagerly watched figure skating on ABC’s “Wide World of Sports.” For all I knew, they truly believed a double-axel was more beautiful than seeing Gordy Howe, the stitches in his face resembling zippers, beating the crap out of opposing hockey players. Later, upon attaining a modicum of maturity, I understood the figure skaters were incredible athletes, too, but back then that just didn’t register.

Then came my second emotional injury, in the form of my cousin Kay’s cute down-the-street neighbor. As I recall, we were classmates, and she was a bookish, bespectacled girl I had admired from afar. Then one night at the ice rink, something about a young lady’s skating style caught my eye. It was kind of stiff-legged, like watching Frankenstein on skates for the first time, yet undeniably fetching, and I sensed I was just the guy to loosen her up.

Gliding alongside her, I was astonished to see it was you-know-who!

Wracking my brain for a pick-up line that would mark me as a man of suave sophistication, I finally hit on a winner.

“How they hanging, toots?”

Suddenly, she looked my way. Steamy with desire, her eyes locked on mine, longingly, hungrily. OK, that didn’t really happen. Hers was more a look that said, “You again?” Yet by some miracle, only seconds later we were skating hand-in-hand.

Just that quickly, I realized one of those nerdy twerps I’d been bad-mouthing was me!

What’s more, with every lap around the rink, I got happier about that. After all, I wasn’t some stupid kid anymore. I was in seventh-grade and skating around the ice rink with a cute girl accompanied by the island strains of the “Hawaiian Wedding Song.”

To my mind, this meant we were practically engaged.

Two laps in I was giving serious thought to my career. Did I want to be an astronaut? Race Indy cars? President of the United States? Or did I want to be some ditch digger, as my Dad warned I’d be every time I brought home another report card? Just like that, I made a mental note to begin doing my homework.

By four laps in, I was confronting a host of new responsibilities. There’d be kids to educate. A home to buy. A secure retirement to plan for. And that was fine, too!

But in school the following week, a buddy reluctantly spoke the words that broke my heart. It seemed my fiancée had been seen with the captain of the eighth-grade football team at the junior high sock hop, doing the Boogaloo.

The remainder of that day I sat stunned, staring blankly into the distance like frozen Jack Nicholson in that scene from “The Shining” where he looks like a Japanese snow monkey.

Was life even worth living anymore?

Apparently, skating to the “Hawaiian Wedding Song” hadn’t meant squat to her. And yet, twenty years later I realized that, had our torrid ice-rink love affair flourished, I’d probably have never moved to Muncie and met my wife and best friend, Nancy, so it all worked out.

By the way, I never strapped on a pair of ice skates again, which was also fine with me.

Skating always made my ankles hurt.