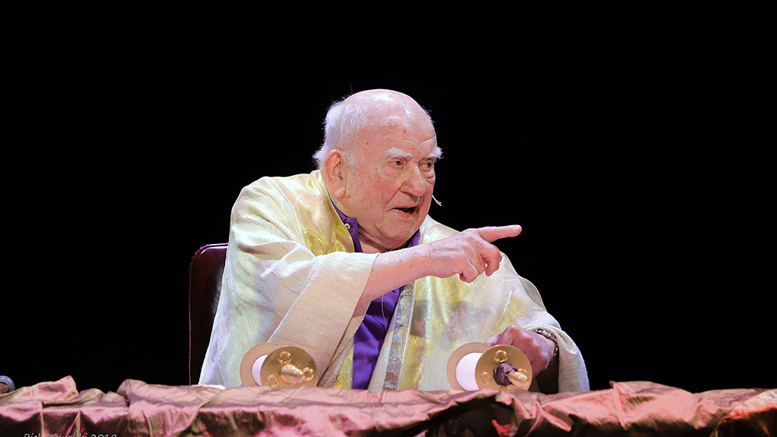 Editor’s note: This play has been cancelled. Mr. Asner passed away on August 29th.

Muncie, IN—Ed Asner, known for his gruff but lovable character, Lou Grant, on the Mary Tyler Moore Show, stars in the political comedy: GOD HELP US! Asner, 91, who plays God, is the winner of eight Emmys and two Golden Globes and was president of the Screen Actors Guild (SAG).

He also played a city editor on his own sitcom, Lou Grant, opposite Nancy Marchand who played the publisher. Younger audiences will remember Grant as Santa Claus with Will Ferrell in Elf. He has also done voiceovers for several animated films.

GOD HELP US! is a refreshing escape from the ongoing political and legal battles that consume competing news networks. It is an entertaining evening that is hilarious, unifying and thought provoking. The subject matter is current. The debate mirrors today but the solution unclear even with God participating. This play is not intended for young audiences.

GOD HELP US! is produced by Asner’s daughter, Liza, who spent 22 years in Portland, OR, where she worked in promotions. She returned to the family home in Los Angeles where she became involved in several theater productions, one of which is currently touring.

GOD HELP US! was written by Samuel Warren Joseph and Phil Proctor and is a three-actor presentation.

Mitch Levine is the director of this production and a film and stage producer. He is a directing member of the Actors Studio, a member of the British Academy of film and Television Arts and was a Fellow at the Juilliard School and the American Film Institute. His Holocaust drama SHADOWS was internationally acclaimed. He is on the faculty of Loyola Marymount University and is a Special Representative to the United Nations.

Cornerstone will observe current guidelines to avoid spreading Covid-19 with seating based on social distancing. Those attending, who have not had the vaccine, are encouraged to wear masks.

GOD HELP US! will be presented in the E.B Ball auditorium at Cornerstone Center for the Arts, 520 E. Main Street. Tickets are $20 and can be purchased through the Cornerstone website or by calling Cornerstone at the number listed below.

Cornerstone Center for the Arts offers opportunities for creative expression for all through community and rental spaces in a historic setting. For additional information go to www.cornerstonearts.org or call 765-281-9503.

For more information on the play, visit http://godhelpus.net