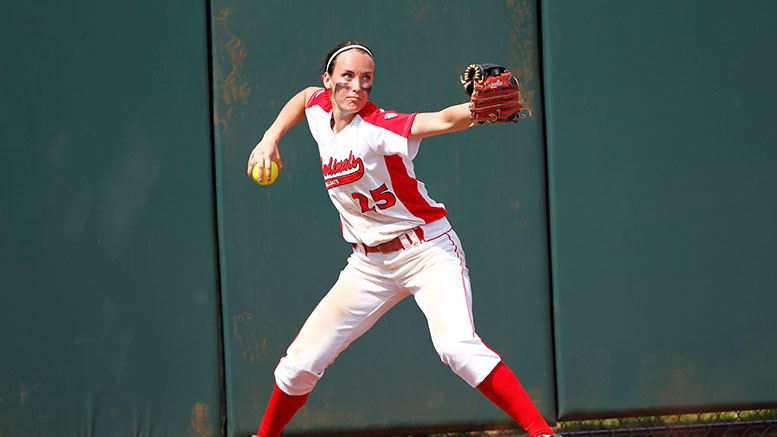 MUNCIE, Indiana – A Ball State University graduate and notable former student-athlete has helped make history for her home country at the Tokyo 2020 Olympics.

“Congratulations to Jen for not only achieving her dream of representing Canada in the Olympics, but for playing a key role in taking home the bronze medal,” Ball State Director of Athletics Beth Goetz said. “Jen can take great pride in the way she has represented both Ball State University and her home country.”

Ms. Gilbert, 29, was born in Canada, and moved with her family to Denton, Texas, as a baby. Despite spending most of her life in the United States, Ms. Gilbert said she dreamed of one day playing softball for Team Canada. She has been a member of various Canadian national teams since 2009, but this year was her first-ever appearance in the Olympics.

A two-time All-American left fielder as a student-athlete for Ball State from 2011 to 2014, Ms. Gilbert helped guide the Cardinals to three Mid-American Conference (MAC) regular season championships (2012, 2013, and 2014) over her playing career.

Ms. Gilbert, the only All-American in program history, became just the fourth two-time All-America selection in MAC history when she was named to the NFCA All-America Second Team in 2014 after earning third-team status one year earlier. The only three-time MAC Player of the Year (2012, 2013, and 2014), Ms. Gilbert finished her career as one of only 11 players in NCAA Division I history to earn her respective conference player of the year award three times.

Ms. Gilbert finished her collegiate career as the league’s record holder in runs batted in (246), runs scored (215), home runs (75), doubles (62) and slugging percentage (.810). Her 75 home runs ranked eighth in NCAA Division I history at the conclusion of her career, and she became the NCAA career home run leader among Canadian-born players with her 66th blast versus North Dakota State (March 22, 2014). In addition, she ended her playing career tied for ninth in NCAA Division I history with 246 RBI, while her .810 slugging percentage was 10th.

Following her Ball State playing days, Ms. Gilbert signed with the Akron Racers after being selected with the 10th-overall pick in the 2014 National Pro Fastpitch (NPF) Draft. She played in 114 games over four seasons with the Racers.

After completing her bachelor’s degree at Ball State, Ms. Gilbert also remained at the University to pursue her master’s degree in Athletic Coaching Education. She spent the 2015 and 2016 seasons as an assistant on the Ball State softball team’s coaching staff.

Founded in 1918 and located in Muncie, Ball State University is one of Indiana’s premier universities and an economic driver for the state. Ball State’s 21,600 students come from all over Indiana, the nation, and the world. The 790-acre campus is large enough to accommodate first-rate facilities and 19 NCAA Division I sports, but our welcoming and inclusive campus is small enough to ensure the friendliness, personal attention, and access that are the hallmarks of the University. Destination 2040: Our Flight Path establishes Ball State’s ambitious goals for our second century. We Fly!