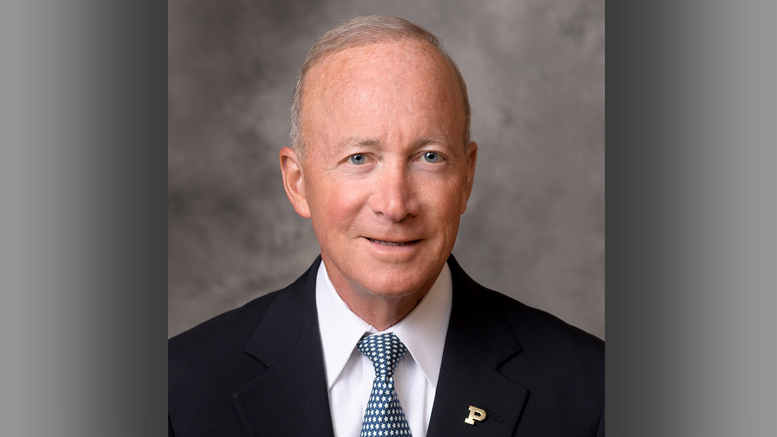 Mitchell E. Daniels, Jr. became the 12th president of Purdue University in January 2013, at the conclusion of his second term as Governor of the State of Indiana. Photo provided by Purdue University.

WASHINGTON–The morning the World Trade Center towers and Pentagon were hit by hijacked jets, Mitch Daniels was inside the White House, working for the Bush administration as the director for the Office of Management and Budget. Daniels, who would later become Indiana’s governor and Purdue University’s president, said he remembers the day vividly.

“My top deputy at the time had a long history of defense and we both looked at each other and said, ‘that’s not likely an accident’,” said Daniels, as he remembered seeing the explosion and fire from the first plane on a TV screen inside the White House.

“Then, of course, the second explosion happened and we knew.”

He said that at the time there was no early warning system at the White House.

“The warning system was somebody running through the hall saying, get out! Run, don’t walk.”

Daniels’ job was to oversee the federal budget. Once the attacks were over, he said he had set up a makeshift office in the Roosevelt Room, and began speaking with other cabinet-level people about what the administration would need to react and respond.

“OMB got some significant assignments, of course first of all to organize all the emergency funding for the military action which cleaned the Taliban out of Afghanistan, for the rebuilding of New York City, the compensation of the victims.”

Daniels said he also had to help Congress figure out how to get airlines flying again.

“The indemnification of the airlines was one of the most complicated things. The airlines couldn’t fly because no one would insure them. Congress had to quickly act to create backstop insurance so that planes could fly at all.”

Daniels said he remembers that time as being one of unprecedented cooperation between Republicans and Democrats.

“It was an amazing time of bipartisan agreement.”

Daniels said he remembers trying to persuade Congress to divert money from other priorities, rather than borrow the money to begin the War on Terror.

“I gave a speech at the National Pres Club, I believe in October 2001, and pointed out that in past crises when, for instance, Pres. Truman decided we needed to act in Korea, they promptly reduced spending on a host of other items and said, this is our priority for now,” said Daniels.

He said that persuasion didn’t work.

“Congress did what Congress has consistently done over recent decades, which is decline to reduce anything, decline to say no to anything, and borrow the money.”

Each time that happens, it adds to the deficit.

Daniels decided to leave the Bush administration and return to Indiana after seeing several goals fulfilled, and he was approached to run for governor. When he won, his having witnessed the events on 9/11 had influence on some of his priorities and decisions.

“I suppose that watching the nation and many good people react aggressively and quickly to 9/11, just reminded me that whatever other objectives one has in public life, there will be emergencies. There will be crises. You better be ready for those,” he said.

He said one of his first briefings was on emergency preparedness, and updating Indiana’s readiness, which helped when severe flooding hit the state in 2008.

His experiences in New York helping victims’ families and helping make sure the compensation was administered reminded him that it is possible for governmental bureaucracy to be helpful and even heroic.

“It does often bring out the best. A lot of people, at least temporarily, are willing to set aside the rules and regs and things that sometimes people in bureaucracies hide behind to avoid making decisions or taking any chance that someone might criticize them later.”