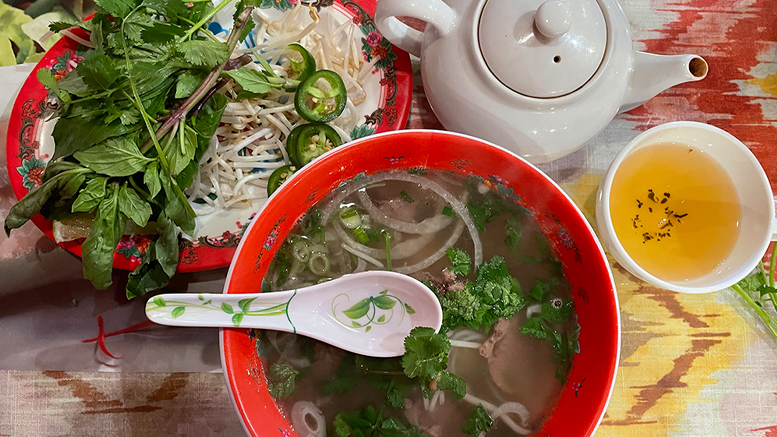 You can’t beat a bowl of pho, with trimmings, for a beautiful meal. Photo by Nancy Carlson.

In this whole wide world, there are only two types of people: Those who know about pho, and those who don’t.

While I numbered myself among the former, until recently I had never actually eaten pho.

So it was after my doctor’s appointment in Indy that Nancy – who had eaten pho – accompanied me to a little restaurant in the northeastern part of that city. Traveling there was proof positive of my desire to try pho, which I’d been intrigued by since seeing some featured on my main eating hero Guy Fieri’s “Diners, Drive-Ins and Dives” a while back.

Pho, which is Vietnam’s national dish, is a noodle soup.

OK, that’s except for Vera Mae’s Bistro’s soups and Nancy’s bean soup, plus chili, assuming that’s considered a soup. Chili is wonderful, be it Nancy’s homemade stuff or some out-of-the-way diner’s or even Skyline’s Cincinnati-style chili with the spaghetti noodles and all.

Still, to me even chili pales in comparison to the taste of a fine, flattened double-cheeseburger. Just a mile or two west of where my doctor appointments are you’ll find the Workingman’s Friend tavern, in my humble opinion purveyor of the best double-cheeseburger in America, quite possibly the world, and maybe even the universe.

My point is, I never take lightly anything that denies me the chance to eat another Workingman’s Friend double-cheeseburger. So hitting this pho place amounted to a true test of culinary courage and fortitude on my part.

Called Long Thanh’s, it’s a friendly eatery in a tiny strip mall on East 71st St. Its red walls hung with Asian art, there was knockoff jade on the counter, an aquarium that may or may not have contained fish, and what looked like hundreds of assorted Asian dinners, divvied into gourmet and regular, listed on its menu and signs.

Among them are some phos. But first of all, let’s get one thing straight. Pho is pronounced with a short “u” as in when you’re making sounds like “uh” or “duh,” not “oh.” Among racier pho joints, the correct pronunciation lends itself to catchier business names such as Indy’s What The Pho, which I’ll leave you to explain for your children.

In no time our Long Thanh’s server delivered us two immense bowls of pho. What kind did Nancy order? Beats me, but I do remember it had a sliced up meatball in it. As for my order, I went for the well-done beef brisket pho with rice noodles for $8.25. This bowl also included a generous helping of bean sprouts, which have the benefit of getting far less mushy than French fries when submerged in soup. Also available to drop into your bowl were cilantro and sliced jalapeños, all of which ended up in what appeared to be a quart of broth.

What kind of broth?

Also sharing the broth, meanwhile, was a large serving of rice noodles, thin pearly white strands of whatever rice noodles are made of – I’m gonna go out on a limb here and guess, uh, rice? – that took on the fine flavor of the broth. Then, of course, as the name of my order strongly implied, there was sliced beef brisket.

Now, I’m not telling you that a certified brisket nut is going to get the same meat rush from what Long Thanh’s serves in its brisket pho that you get from, say, Shapiro’s Deli plopping a huge, quivering mound of thinly sliced brisket on a bun slathered with mustard. Nor is it the meat rush you get from cooking brisket in your own family Crock Pot, or buying some on a sandwich from your neighborhood Arby’s.

But still, it was a nice touch.

In no time, it seemed like Nancy and I were slurping never-ending spoonfuls of pho into our mouths and down our throats, barely lowering the observable broth level despite our best efforts. The fact we’ve been married nearly a hundred years proved beneficial in avoiding any sense of embarrassment, especially on my part, while messily herding squiggly swarms of rice noodles toward my gaping pie hole like some culinary cowboy.

Figuring inhabitants of the Southeast Asian world eat pho with chopsticks seemed mind-boggling. How do they do it? I can’t imagine. Of course, they’ve had far more practice at it than we have, pho having been introduced to the world through Vietnam in 1900 or so. This was by street vendors wearing funny hats who carried all the makings and required cooking items with them, fire included.

By the way, back then Vietnamese from the northern and southern halves of that country weren’t exactly seeing eye-to-eye, even on so innocuous an issue as pho. Some quick Internet research revealed that, depending on where one lived in Vietnam, one’s pho preferences varied from the width of the noodles to the sweetness of the broth to the choice of herbs for inclusion.

It was about the time I first noticed the hint of a dent in my broth level that I realized I was stuffed to the gills with what a half-hour earlier had been a dish I’d only heard about. So next time I leave my doctor’s office after a checkup, will I head for Long Thanh’s instead of Workingman’s Friend?

I mean, that’s just crazy talk for a double-cheeseburger addict. But if any of my fellow patients do, I’ll certainly understand why.