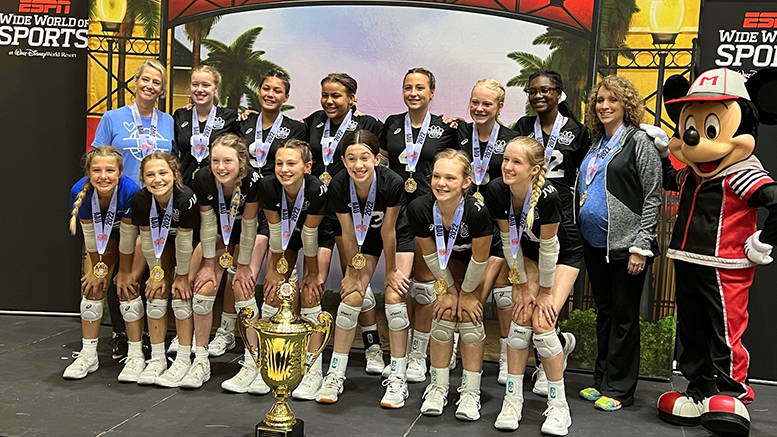 On June 15th, thirteen twelve-year olds embarked on their quest for the gold. Two-hundred and twenty-one twelve and under teams participated at the 49th AAU Junior Nationals in Orlando, Florida. There were nineteen teams in the open division, including the Peppers. The open bracket is considered the best of the best and maintains the highest level of competition.

“We were seeded fourth going into the tournament. You hope to have a more lenient schedule on Day 1 to get the jitters out. To my surprise there were no jitters, the girls were all business.”— Head coach Kylie Johnson

The Peppers didn’t drop a set on Day 1 and wouldn’t until the third match on Day 2, which resulted in a miraculous third set comeback when they were down 8-14. Amelia Howell stepped up to the serving line and welcomed the challenge. “I was nervous at first, but after a couple points I could feel our energy and felt more confident. Once the score was 14-14 I knew we could fight to win. After the match I felt very accomplished and was so happy for our team,” Howell said. Peppers won the set 18-16 to advance to the gold bracket and remain undefeated. “Not many players, 12 years old or not, could consistently serve under that pressure. I have never seen a comeback from that great of deficit in the third set, while teetering on match point,” stated Johnson. Magic was in the air.

Day 3 was all about seeding. From the first set the Peppers were on fire! Even with two of the three matches going to a third set, the Peppers grew stronger and stronger in their resolve to chase the gold. Setter and All-American Paislee Terry talks about third-set mentality, “We concentrate on serve and serve receive. I know that if our passing game is good everything else will fall into place. We also talk a lot in third sets about limiting our errors and not giving away easy points.” After a third set victory in the third match the Peppers took the top seed in the open division. Their undefeated streak growing to 9-0. 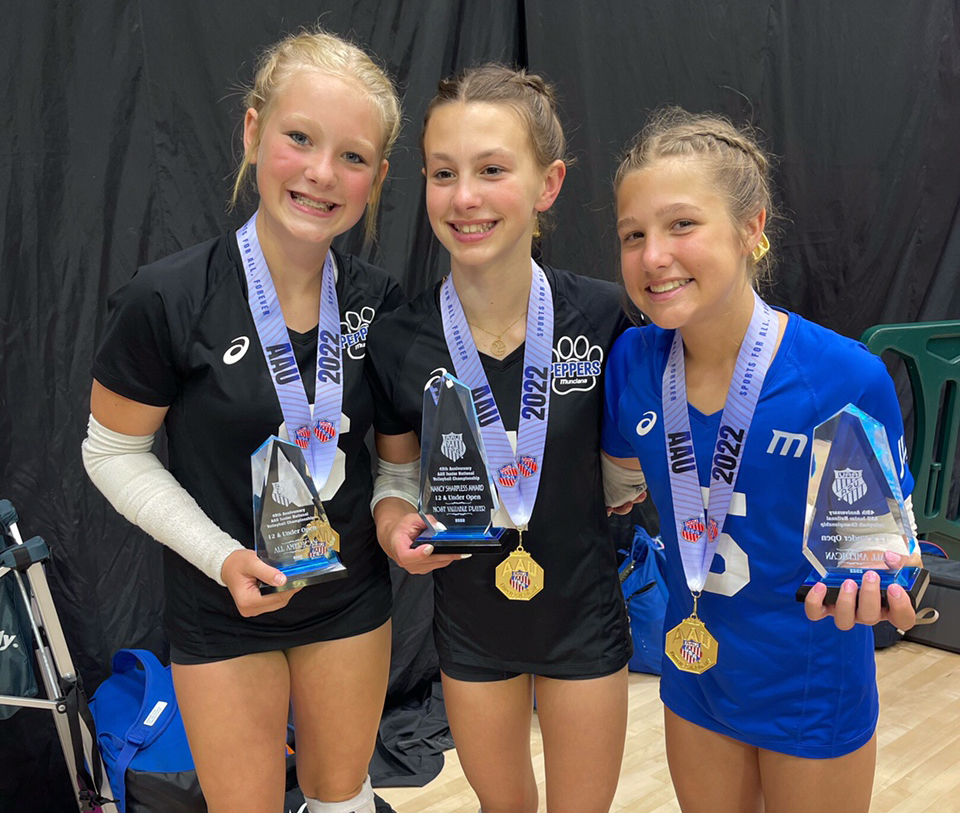 On Day 4, the teams in the Championship bracket move to Disney ESPN Wide World of Sports Complex. Three-time Peppers, co-captain, and tournament MVP Chloe Ritchie said, “After being undefeated on Day 3 it really didn’t feel real, I thought about how much we trained for this moment and I couldn’t wait for it to happen.” There were seemingly no nerves for the Peppers on the morning of Day 4. They cruised through the quarterfinals, and through the semifinals, to land a spot in the championship match! Two-time Pepper, co-captain, and All-American Brooke Neale stated, “As I reflect back, we were just so excited to play at that place (ESPN) and just knowing that it would be an amazing experience to get to play in the 12 Open Championship.” Neale and Ritchie had lost in the semifinals last year in a three-set heartbreaker to take home the bronze. “To say Brooke and Chloe were hungry for the gold would be an understatement. They were our driving forces all year,” noted Johnson.

The Peppers were to play A5, a top club from Atlanta Georgia. The stage was set, cameras were rolling, and both teams lined up to go to battle. Peppers took an early lead 10-7, pushed forward to 21-13 and closed out the first set easily 25-16. A5 regrouped quickly and took the lead 3-8 in set two. Peppers chased until finally tying the score at 17–all. With another tie at 18-18 the Peppers took the first lead of the set. A5 called back-to-back timeouts at 20-18 and 21-18, and closed the gap 21-21. A5 only scored one more point as the Peppers clenched the victory 25-22. Peppers are National Champions! “When I look back on our Championship match it was really crazy because of how we played. We have never played like that, and we worked so hard for every point,” said Ritchie. The gym erupted in celebration of the Peppers. Parents, coaches, former Peppers, tons of supporters showed up to cheer on the young Munciana team. Neale said, “We just played our hearts out and when we all did our part we just finally came together as a team and that made us unstoppable.” 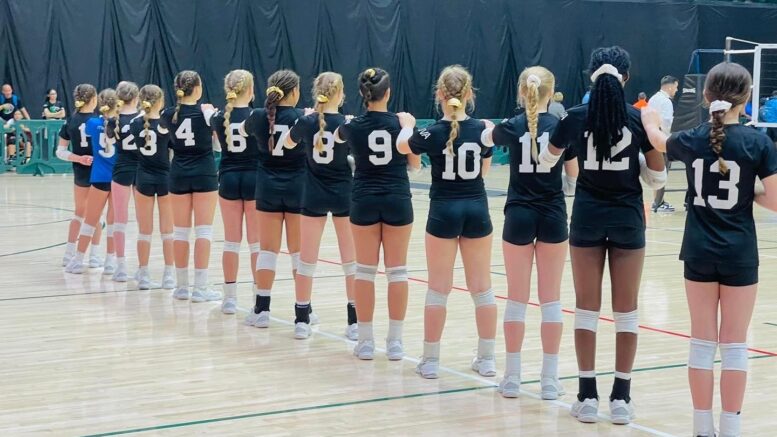 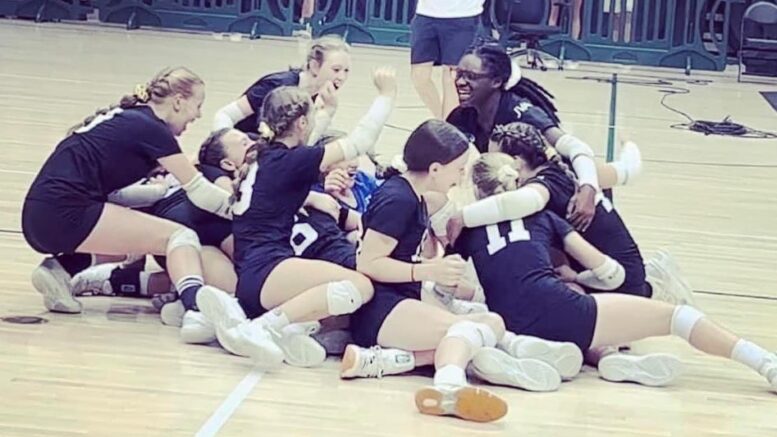 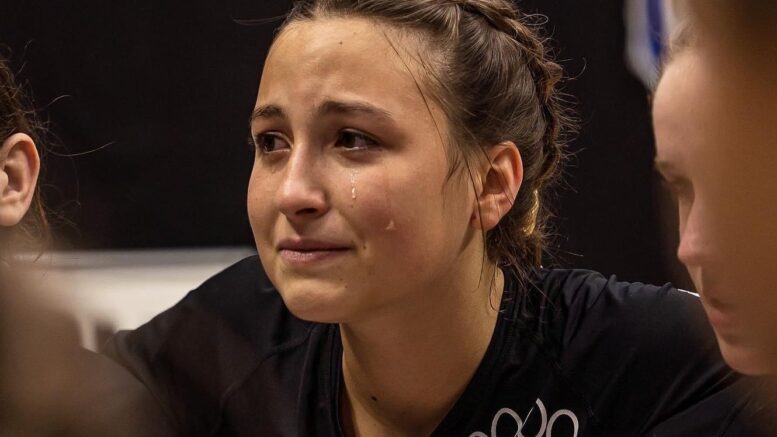 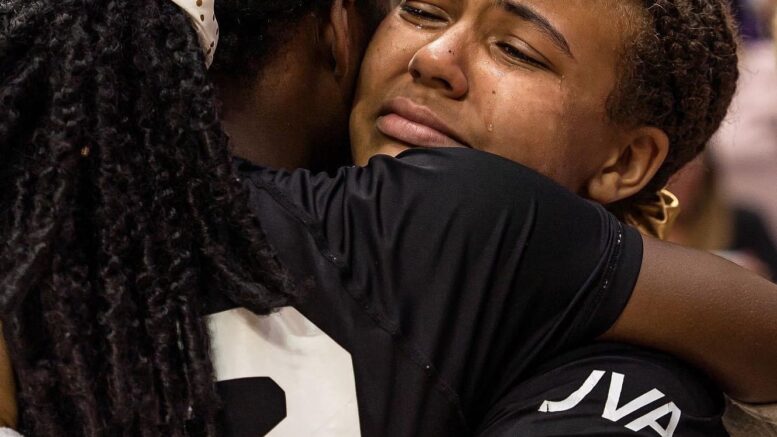 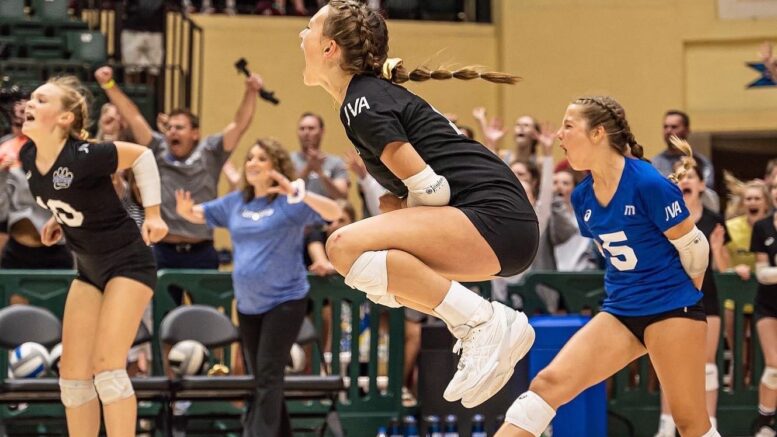 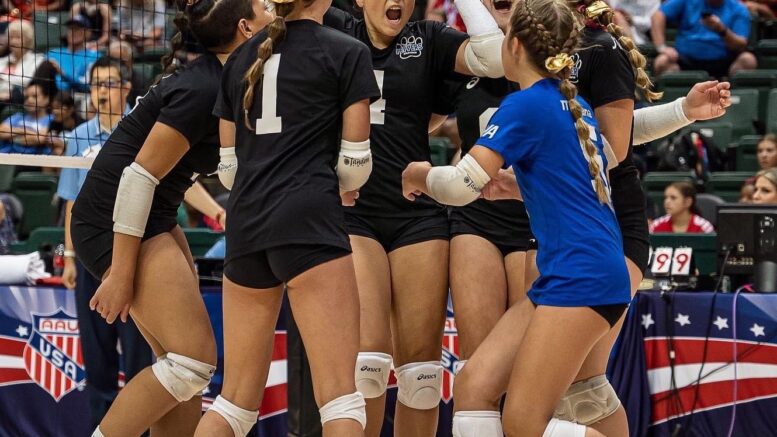 This is head coach Kylie Johnson’s eleventh year coaching at Munciana in the 12 and Under division, and her fourth year as the Pepper’s head coach. Something she stresses to her players is accountability. “Every position has a job description. You have to be accountable and responsible for each detail of your job. If everyone does their job every time, weaknesses are harder to find. This team demonstrated why accountability is so important. Every kid shined at some point throughout the week. That’s incredible when you can feel the moment that all your hard work paid off and you contribute to the team effort.”

Coach Keri Howell is in her second season with the Peppers and reflects back on the week, “I have seen a lot of volleyball, and been to many AAU National tournaments. I have never seen a young group of players put together such a steady, fearless, and dominating 4-day performance. Each player did their job and that’s what we’ve been asking them to do all year. It was the perfect culmination after months of training, dedication, teamwork, and heart.”

Being a Pepper means being a player on one of the elite 12 and Under teams in the nation. Eva Clevenger was new to Munciana this year- “I always heard it was a big deal and an honor to be a Pepper. But I also heard, and learned, it was a great challenge…it will be an experience I will never forget.” Delaware County Hall of Fame coach, Steve Shondell, started coaching the 12U team in 1999. He named them the “Peppers” after a most beloved family dog, and the name has now become a legacy.

Many “big-time” players have earned a spot in Pepper history: Kim Kuzma, Caitlyn Vann, Caitlin Cox, Mia Tabberson, Kati Vasalakis, Taylor Morey, Morgan Bergren, Megan Miller, Kenzie Knuckles, Kylie Murr, Melanie and Mabrey Shaffmaster, Ellee Stinson, and Charlotte Vinson to name just a few. Shondell had won several national titles at the USAV Tournament before he retired after the 2010 season. Shondell said, “I was so excited to hear the Peppers won the AAU National Championship for the first time in history this year.”

As you walk inside Munciana’s gym you can see banner after banner hanging from the ceiling. They honor the teams that have previously won a National title. It’s a true reflection of the success Munciana has incurred over its lifespan. Johnson had this to say, “After we had won, I mentioned that we would be getting a banner. The girls lost their minds all over again, I think they were more excited about earning a banner than a medal. The trophy will eventually collect dust, the medals won’t be worn, but the banner is your legacy.”