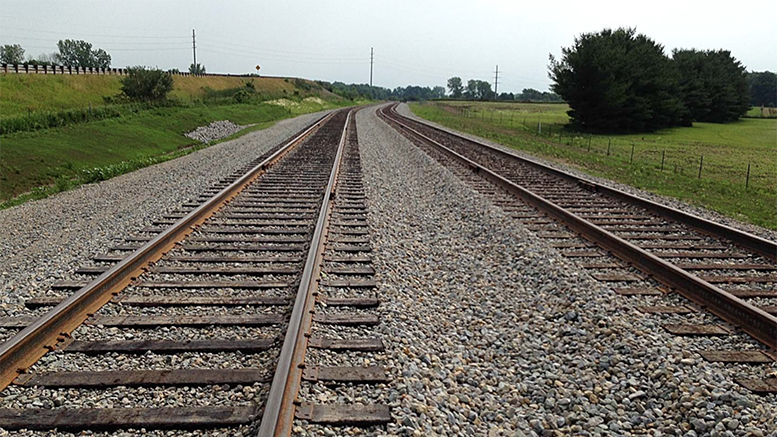 Companies will truck their products and materials to this rail spur for loading onto trains. Likewise, materials needed for those companies will come via train to the rail spur to be loaded onto trucks for local delivery. Photo provided

Delaware County, IN– In a case of making lemonade after life hands you lemons, the Delaware County (Indiana) commissioners have announced that a railroad spur built to serve a now-defunct manufacturing plant will serve as a shipping and receiving point for companies that need goods transported by train.

In the fall of 2008, a maker of wind turbine parts announced plans to open a huge manufacturing facility in Delaware County. But the economy soon slipped into recession, the jobs that had been forecast never came to be and the rail spur went unused.

The Delaware County commissioners will work with Good Industries of Ohio in opening a transloading facility at Interstate 69 and Indiana State Road 332 in the western reaches of the county.

The rail spur connects to a Norfolk Southern rail line. The facility is located at an East Central Indiana transportation hub.

Turning the rail spur into a productive economic development asset has been a priority for the current county commissioners.

“I think this is going to be great, and it’s an incredible opportunity,” Commissioner James King said. “The team that we have working is doing great things.”

Good Industries will pay Delaware County, which will continue as owner of the facility, a percentage of the revenue from shipping operations at the site. The county commissioners will use revenue from the transloading facility for infrastructure improvements, including road paving and sewer and water upgrades, in the area.

Good Industries will also cover all maintenance costs of the rail spur, said Brad Bookout, economic development director for the county. This will save the county up to $14,000 a year.

The average rail car holds the equivalent cargo of three to five semi truck loads, Hartman said. “It takes a lot of long-haul trucks off the road.”

Shipping by rail typically provides an economic advantage for companies that move goods and materials more than 500 miles. Semi-tractor trailers service the “first and last” miles.

The transloading facility redeems the final speculative element of the wind turbine project announced in 2008. The county commissioners have over the years successfully recovered $1.3 Million in incentive funding given to Brevini Wind, that thanks in part to the Great Recession, never got a foothold in what was to be its new home.

About 80 percent of the original $5 million cost of the rail spur was paid by proceeds from a federal U.S. Economic Development Administration grant.

The commissioners acquired the property to accommodate the transloading facility – and without using eminent domain. The facility is located on the south side of the former Brevini building.

The rail spur was built in order for huge parts of energy-generating wind turbines to be shipped from the plant. But after Brevini’s business failed, the Delaware County commissioners believed other companies could use the spur and Bookout pursued the possibility.

Good Industries owns and operates two rail transloading facilities in Ohio, where the company has brought former industrial sites back into productive use.

Tracing its roots to its start as a trucking company in 1976, Good Industries began to focus on transloading operations in the early 1990s, Hartman said. The company is considered a preferred partner of Norfolk Southern rail.

Rod Good is the owner and founder of Good Industries.

“He’s just a hard-working guy who got his start unloading trucks,” Riggin said about Rod Good. “You always want to join with people who know what they’re doing and Mr. Good has a track record.”

Delaware County’s new transloading facility will see increased activity as more companies make use of its connection to rail, Hartman said. What will initially be a portable office trailer and trucks and trailers staged at the site will grow.

“Our goal would be to eventually build a warehouse for storage somewhere in the business park,” Hartman added.