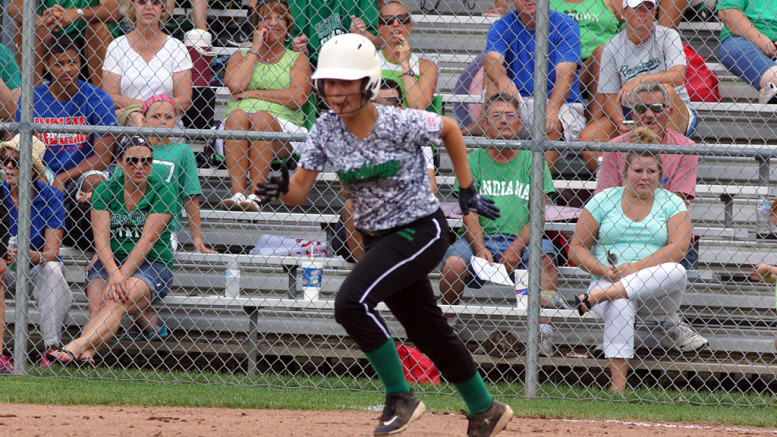 As the Yorktown crowd looks on, Yorktown’s Hannah Avila hustles to second base during Yorktown’s victory over Illinois on Tuesday.

Team Indiana (Yorktown JAA) wrapped up pool play by beating both Ohio and Iowa in the Little League® Majors (12U) Softball Regional Tournament in Indianapolis. Yorktown enters the single elimination tournament of six teams as the second seed. By way of their seeding, the Tigers earn a bye and will play at 4 p.m. on Wednesday for a trip to the championship game in what is perhaps the most highly-publicized and prestigious youth sports contest in the country, the Little League® World Series.

In their first contest, Team Indiana completed a Sunday-game that had been postponed due to weather.  The Tigers cruised to an 11-1 victory over Ohio.

The Tigers played their originally scheduled game for Tuesday starting at 2 p.m. against Illinois.  While the Illinois team entered the game with a 1-2 record, Yorktown struggled the entire contest to figure out the opposing pitcher, but persevered itself to a 3-0 shutout of Illinois.

The two teams entered the six and final inning knotted at zero. Raegan Cox singled to get on base in the sixth and advanced second to third on a single by Hannah Avila. The Tigers’ starting and winning pitcher, Rachel Hourning, served up some tourney heroics for her team when she doubled over the left fielders head, scoring Cox and Avila. Yorktown added another run, and Lexie Robertson shut the door in the sixth with a spectacular defensive play to preserve the win.

(Yorktown JAA) now enters the single elimination tournament as the second seed and needs just two more wins to earn its trip to Portland, OR. The top seeded Iowa team did not allow a single run in the pool play portion of the event and is looming, if Yorktown is able to take care of business in its opening game tomorrow.

For more information on the tournament, visit the Yorktown JAA site, www.yorktownjaa.org, or the official Little League Tourney site, http://www.llbws.org/llbbws/llsbws/central.htm.