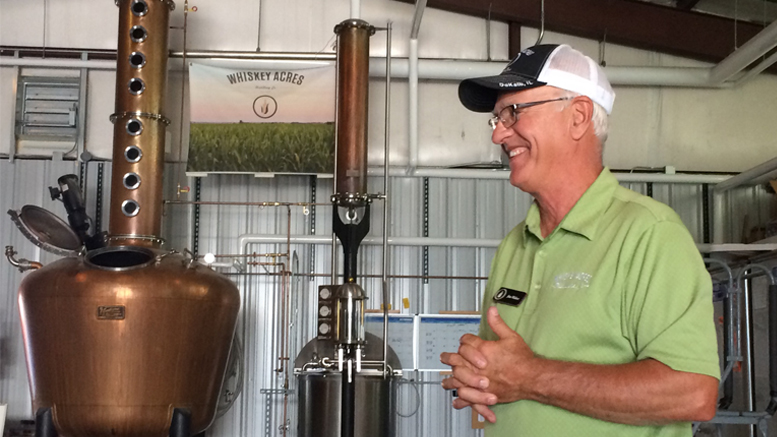 Full confession: On exceedingly rare occasions and for medicinal purposes only, I have been known to take a teensy-weensy sip of the corn whiskey known as “bourbon.”

What’s more, I don’t dislike it.

You can imagine, then, the excitement with which I greeted the news that by marriage – through my wife Nancy’s sister Marti’s husband Charlie’s side of the family – I am closely related to actual distillers of bourbon, rye and vodka. Their business is Whiskey Acres Distilling Co. of Dekalb, IL., the brainchild of father-son team Jim and Jamie Walter.

Now it’s true, I had never met Jim or Jamie until Nancy’s family reunion a couple weeks ago. Before meeting them, they could have taken turns smacking me upside the head with ears of future-bourbon corn, and I couldn’t have provided their identity to the cops.

Yet, upon learning they were the distillery’s owners, I had to fight an overwhelming urge to hug the guys I now thought of as my beloved relatives, Uncle Jim and Cousin Jamie. After all, Muncie being a decidedly fine craft beer and winery town, one becomes rather accustomed to encountering the good folks who are brewers and vintners hereabouts. But whiskey makers? They are a rarer breed. Comprehending that by some miracle of good fortune, I had distillers in the family, was like learning of a relative who’d won a Nobel Prize, or been a founding member of The Rolling Stones.

Before long on this brilliant Illinois afternoon, we family members were in the distillery’s bar/gift shop, slaking our thirsts with Manhattans, Old Fashioneds and even sweet bourbon slushes. Then my numero uno Uncle Jim led a group of us into a field to discuss the grains involved, including corn, wheat and malted barley, before directing us to the distilling building. 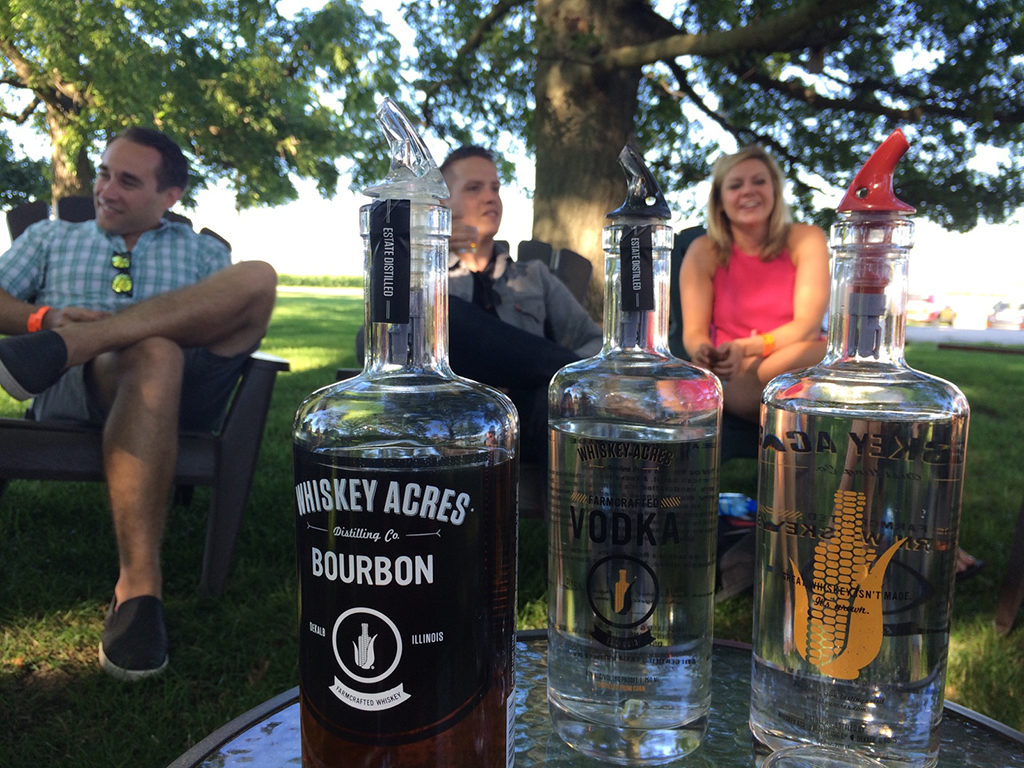 After a distillery tour, patrons sip samples of its wares. Photo by: Nancy Carlson

This was a cavernous structure housing assorted huge hoppers, the technical explanation for which I won’t confound you with here. Okay, okay. Actually I won’t confound you with it because, having flunked remedial science in eighth grade, most of the time I had absolutely no idea what my dear Uncle Jim was talking about, except it concerned making whiskey, which was good enough for me.

The most impressive sight on the tour was his still.

A 500-gallon work of functional sculpture rendered in polished copper, it rested on a ponderous base from which a periscope-like tube, dotted with small windows, reached toward the ceiling. My lack of distillery knowledge notwithstanding, I did fully understand that without this beautiful contraption, which could have come right from the pages of an H.G. Wells novel, you weren’t going to make any whiskey.

If you know anything about the federal government, it may not surprise you that even great guys like my favorite Uncle Jim and Cousin Jamie had to navigate a fair number of governmental hoops to open their distillery. Chief among them was this little doozy: To get a federal permit you must own a still, but to own a still you must have a federal permit. With patience, gumption and, as I understand it, some expert legal assistance from my aforementioned attorney/brother-in-law, Charlie, it all worked out in the end.

Proof, no pun intended, of this filled Whiskey Acres’ rick house. There hundreds of oak barrels – most large, some smaller but all with cryptic identifying notes written in indelible ink on their flat wooden ends – fragrantly filled storage racks, waiting for the tasty stuff inside to age to perfection.

Once my Uncle Jim’s very informative tour ended, we all followed him out to where the grass was full of lawn chairs resting in the coolness of tall shade trees. Having been presented with souvenir Whiskey Acres shot glasses, we were all treated to tiny pours of the distillery’s bourbon, rye, vodka and even a clear whiskey that hadn’t darkened yet.

We gave it all a hearty thumbs-up.

Anyway, I came away from this visit with a great deal of respect for my newly cherished relatives and their homegrown distillery. I also came away with a black Whiskey Acres baseball cap and a bottle of bourbon, which I am saving for a special occasion.