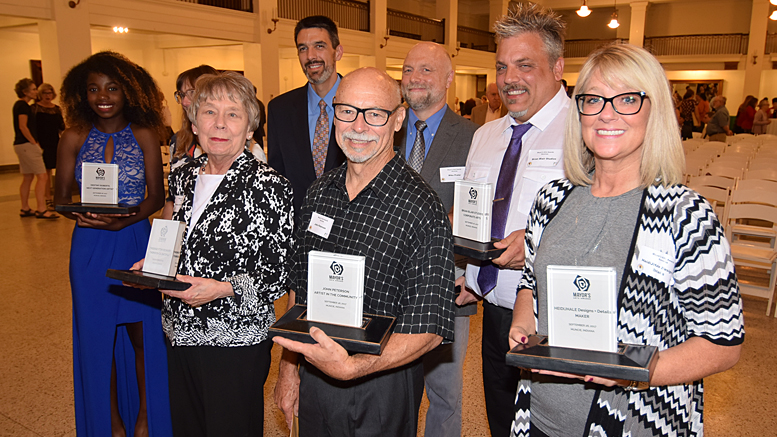 The winners of the 2017 Mayor's Arts Awards presented at Cornerstone Center for the Arts. Photo by: Mike Rhodes

By: The Muncie Arts and Culture Council—

Muncie, IN—The winners of the 2017 Mayor’s Arts Awards were announced at a gala event at Cornerstone Center of the Arts earlier this evening, September 26th. The Mayor’s Arts Awards are the most prestigious honors conferred by the City of Muncie on individual artists, teachers, non-profit organizations and patrons of the arts. Winners received their award, a proclamation from the Mayor and a cash stipend to further their own creative works. See the award winners and their bios below.

Artist in the Community: John Peterson 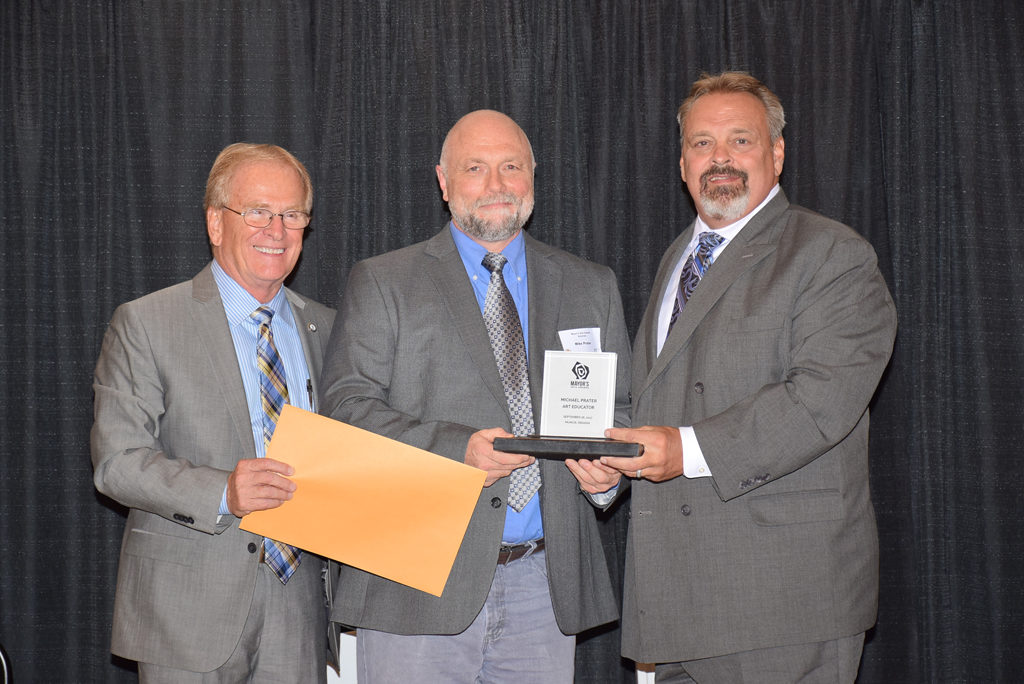 Mike Prater has taught at Ball State University since 1995. Mike is an accomplished artist whose work has been exhibited locally and regionally. However, what truly stands out about Mike is his commitment to his students and the community.

Mike volunteers significant time for such projects as serving as graphic artist for the MLK Dream Team Muncie Freedom Bus; creative consultant for the YMCA Apple Tree Child Development Center; and the creation of seven murals over four years for the YMCA. In addition to volunteering his own time, Mike encourages his students to get involved in the Muncie community as part of their educational experience at Ball State University. As a result, a number of his students are teachers in the Saturday Morning Art Program sponsored by the School of Art. Through this program, Dr. Prater and his students engage elementary age students in the process of creative discovery. Mike Prater continues to make a significant impact on arts education in our community. 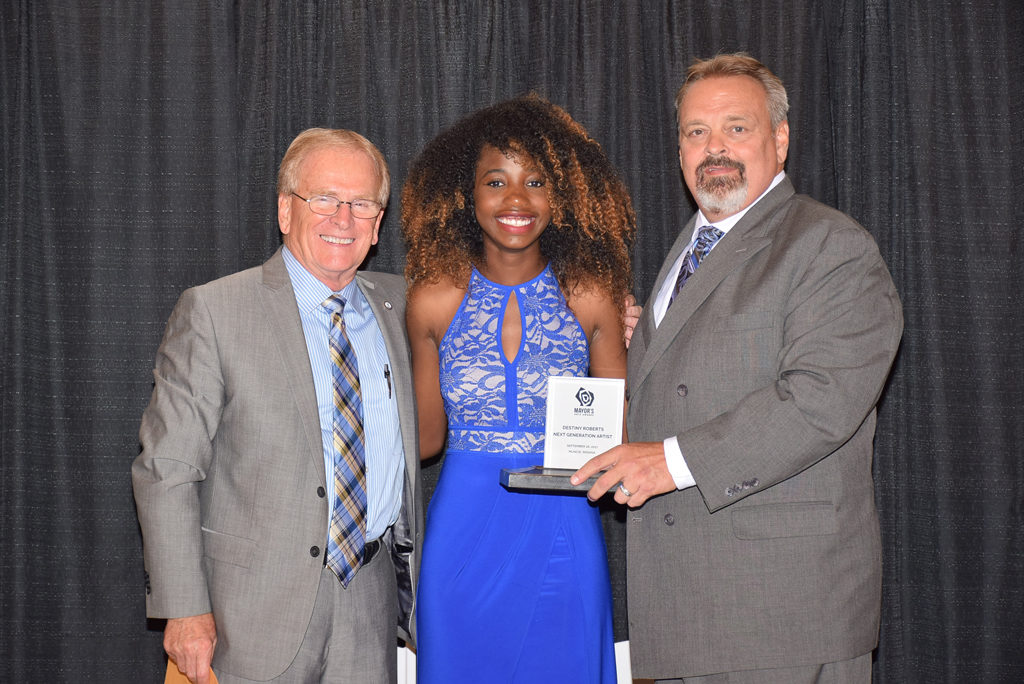 At 14 years of age, Destiny Roberts certainly personifies “Next Generation.” Although she’s been singing at family events since she was three, Destiny hit the Muncie stage in January 2014 at age 11. She was invited to perform at the Dr. Martin Luther King, Jr. Day program at Muncie Boys & Girls Club. Her rendition of “A Change is Gonna Come” convinced everyone they were listening to a grown woman; her voice was that full and resonant. That year she also placed first at the Indiana State Fair in the Junior Female Vocal Division and in the Overall Junior Division.

Since then, Destiny has performed at a number of local and statewide programs including sporting events, school programs, conventions and the Black Expo Corporate Luncheon. Destiny’s mission is to perform songs with meaning and a message and she is always working to improve her skills through voice and piano lessons. Her nominator referred to Destiny as “an ‘old soul’ and a person who sings with passion and purpose.” 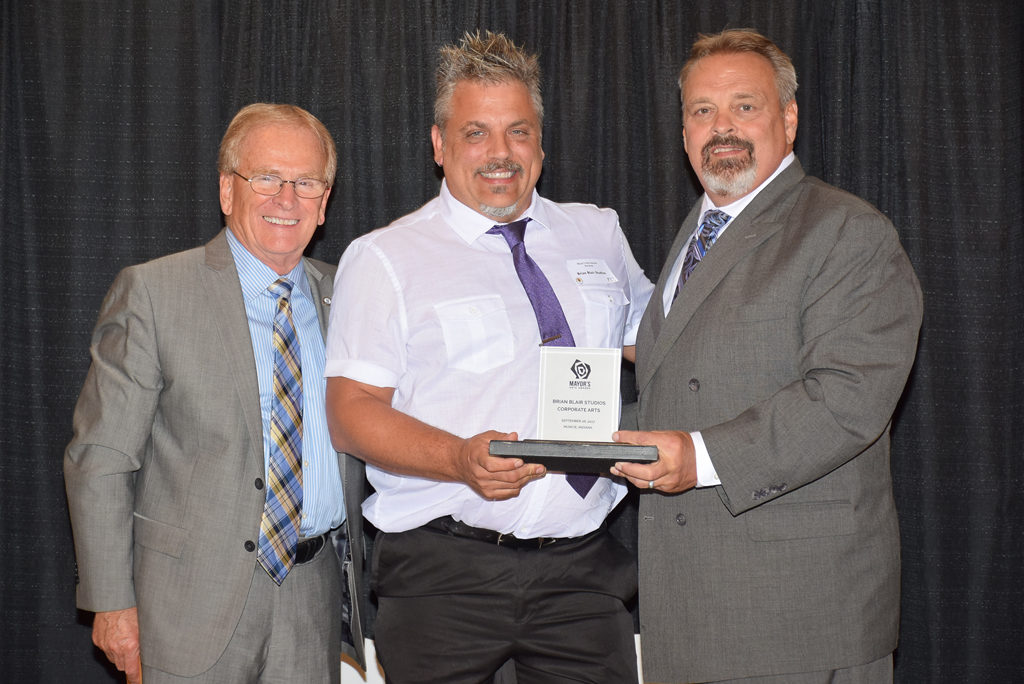 If you are an aficionado of all things spooky, you may best be familiar with Brian Blair’s work through Scarevania, the region’s most elaborate Halloween attraction. Brian has continued to put his artistic skills to work with latex masks and associated props by creating “Son of Scarevania” at Cornerstone Center for the Arts to assist Cornerstone with its fundraising goals. Brian’s volunteer service also extends to the annual showing of Rocky Horror Picture Show – another significant fundraising event for Cornerstone Center for the Arts. Through his creativity, his nominator tells us that Brian has helped raise thousands of dollars for Cornerstone’s Department of Education and class scholarships for those who need assistance.

However, don’t let Brian’s penchant for the creepy and spooky pigeon-hole him. He has done some amazing work focused on children, including pieces for Pediatric Rehabilitation at Cardinal Health Specialties, Muncie Children’s Museum, and Maring Hunt Library. Brian Blair Studios has a wide regional reach with its creative headquarters here in Muncie, Indiana. Brian’s volunteer service has demonstrated vital support for the arts in our community. 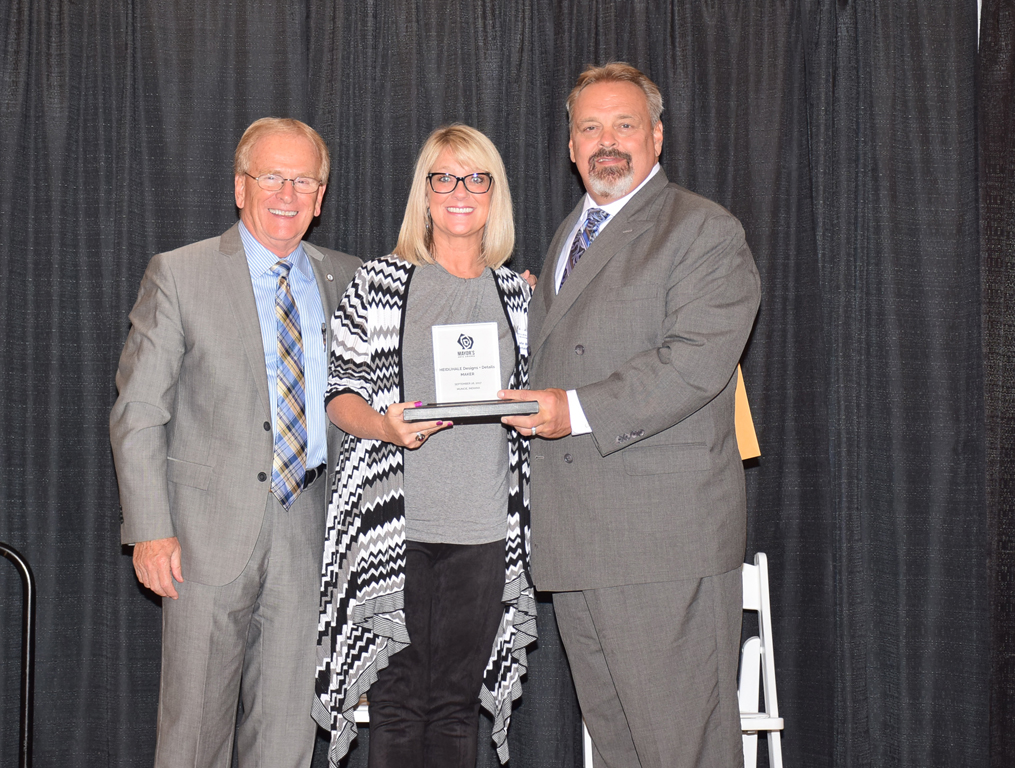 Heidi Lynn Hale has managed an ever-growing company making high-profile jewelry since she first started selling to friends in 2002. Her online start on E-Bay helped her obtain wholesale clients from across the country. Some of Heidi’s pieces have been part of celebrity gift bags at such diverse events as the Palm Springs Film Festival and the Indianapolis 500.

Shipping to customers all over the world through her website, HeidiJHale Designs + Details opened their retail store in downtown Muncie in 2015, where Heidi offers unique, one-of-a-kind pieces not available online. The website notes that, “every piece of jewelry … is designed and handcrafted by our skilled metalsmiths and local artisans in downtown Muncie. …we are proud to know that all HeidiJHale jewelry is unique and of the highest quality.” HeidiJHale Designs + Details certainly exemplifies the international impact of Muncie’s creative economy. 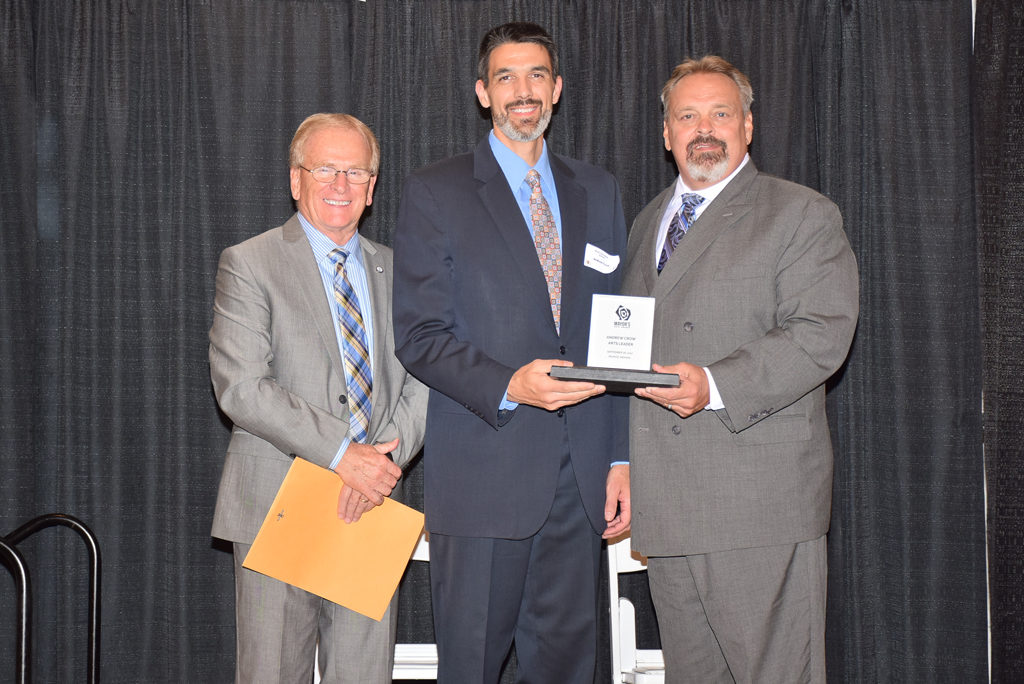 Dr. Andrew Crow serves as the Director of Choral Activities in the BSU School of Music, where he joined the faculty in 2009. Dr. Crow exemplifies town-gown collaboration through a wealth of innovative partnerships within the Muncie community that unites diverse disciplines and demographics. As the Artistic Director of Masterworks Chorale, he has managed many collaborative programs, partnering the Chorale with Muncie Symphony Orchestra, Muncie Children’s Museum, Cornerstone Center for the Arts, various university departments (in and outside of music), and diverse community voices.

Most recently, Dr. Crow and Masterworks Chorale commissioned a choral symphonic work entitled, “Middletown Chronicles: The Making of Middletown America.” Creating this piece involved research with the Center for Middletown Studies, Ball State University Libraries, students and community members. Students from Motivate our Minds had the opportunity to study local history and showcase their projects at the commemorative concert of Middletown Chronicles in May 2016.

Andrew Crow’s past and continuing work are examples of outstanding leadership and partnership with the Muncie arts community. 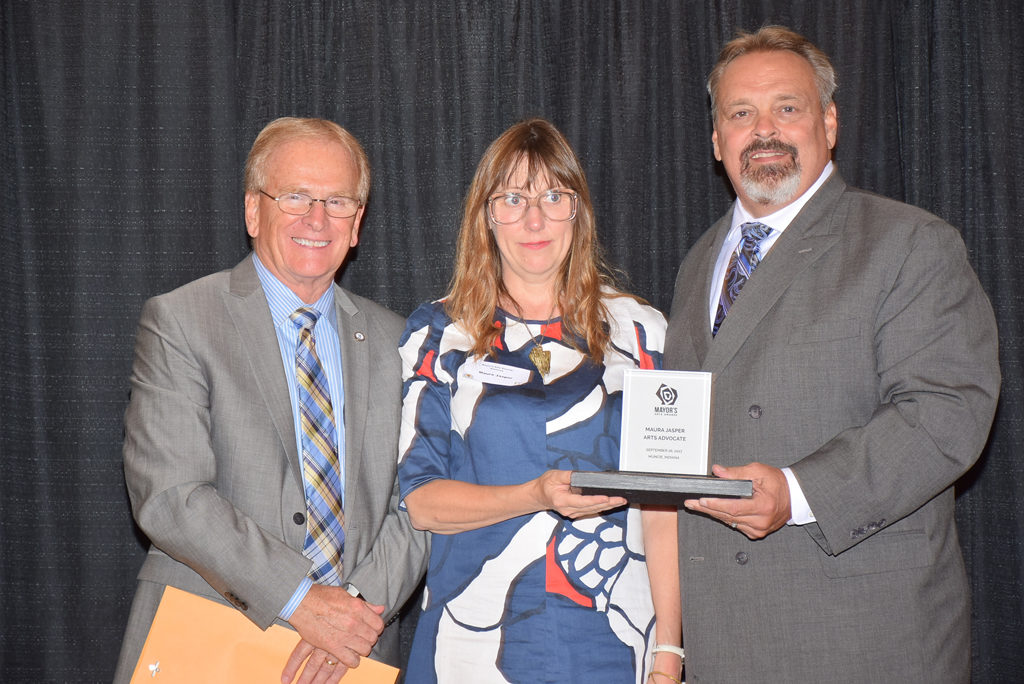 Maura Jasper teaches undergraduate and graduate courses in Ball State’s School of Art. She is an active artist herself in venues across the country and across the Atlantic. However, it is her extensive involvement within the local arts community that illustrates her incredibly strong support and advocacy for the arts. Ms. Jasper actively encourages her art students to engage with the community through such programs as First Thursday events in Madjax, Muncie Makes, and Muncie Civic Theater Studio. Since 2011, Maura has directed the video and performance components of, and involved her students in, the much-loved pop-up art show, Monkey Thunder, at Gordy Fine Arts and Framing Co.

As noted by her nominator, Maura truly believes in Muncie – its diversity, its people and its potential and knows that it is necessary to get involved in order to facilitate change. Through her own volunteer work in the arts, Maura daily demonstrates the positive impacts arts and culture can have on a community and its people. 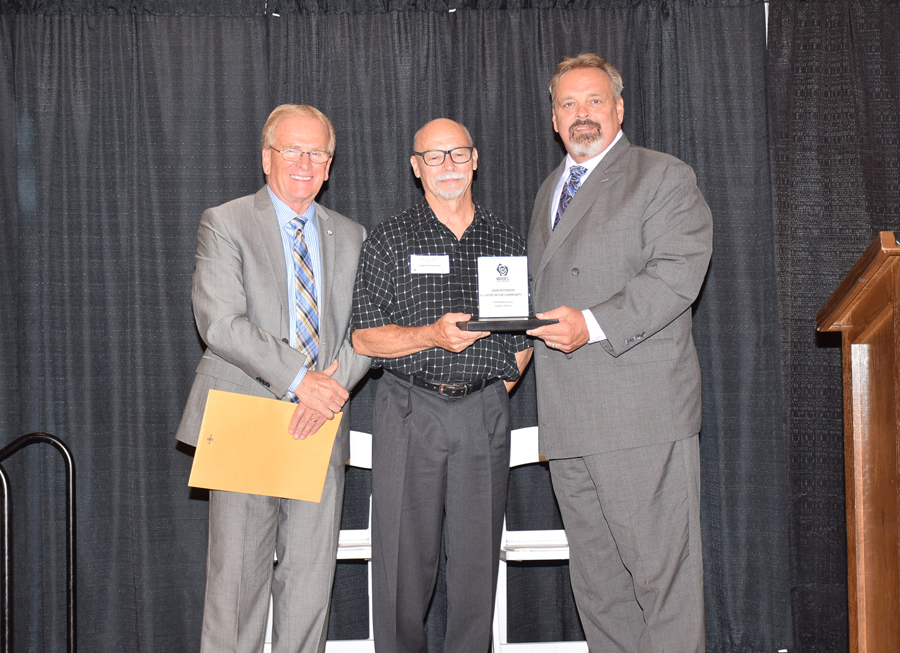 Artist in the Community:

John Peterson has contributed to the artistic excellence of Muncie since enrolling as a student in the Ball Sate Art Department in 1964. Only two years later, with friends Alan Patrick and David Cayton, Bethel Pike Pottery was organized. This relationship and business inspired a book by Ned Griner in 1996 titled The Bethel Pike Pottery: The First Thirty Years.

Peterson is the only one of the three who continues to produce pottery. The John Peterson Pottery has been in operation for more than 40 years. It includes a school where student potters of all skill levels learn their art. John is known throughout the Midwest and beyond as a potter and teacher who excels in his art and is devoted to his students.

John’s commitment “to making well-designed, functional pots” became a lifestyle. He has frequent open houses at his studio and continues to teach weekly classes in the art of making honest pottery. 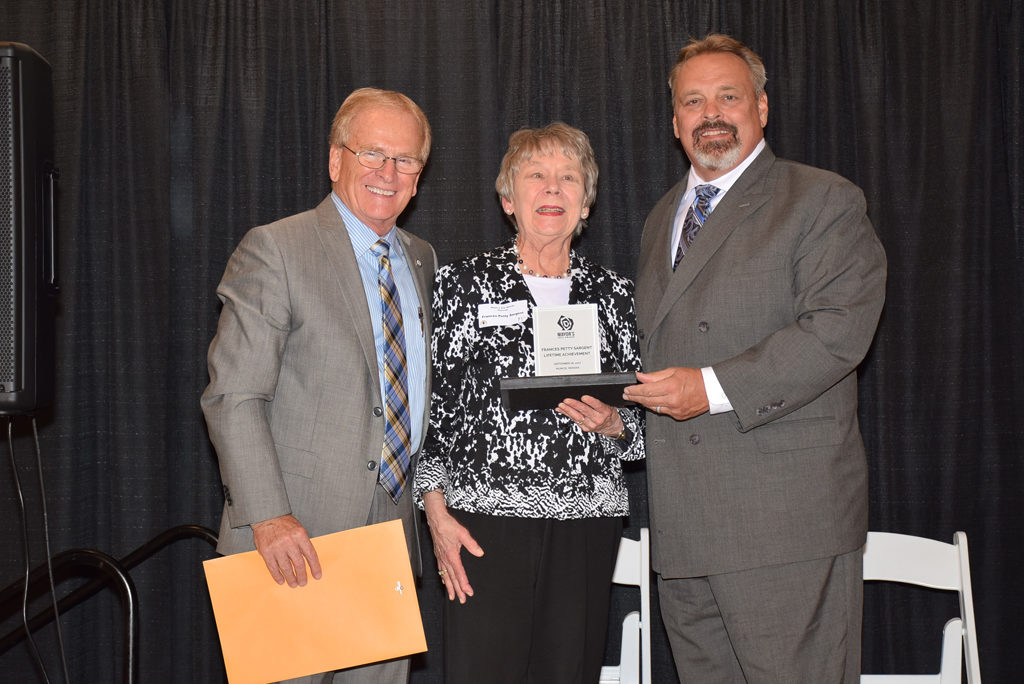 Frances Petty Sargent has been a pillar of the cultural community in Muncie since at least the 1970s when she and first husband Edmund F. Petty owned Ball Stores. She has played, and continues to play, a significant role – particularly in the lives of three major arts organizations in Muncie: The David Owsley Museum of Art at Ball State, Minnetrista, and Cornerstone Center for the Arts.

In the late 1980s, Mrs. Sargent established the Edmund F. Petty Memorial Lecture at the Owsley Museum, bringing nationally known artists, critics, and art historians to address current relevant topics. This annual lecture continues to be a signature event on the university’s calendar. Her contributions to DOMA continue through gifts of works of art and in philanthropy.

Also in the 1980s, Frances Sargent worked to ensure the success of a new cultural center on the site of the Frank C. Ball home, including writing a letter commemorating the work of her mother-in-law, Margaret Ball Petty. Margaret provided the original impetus behind the creation of Minnetrista and Mrs. Sargent’s letter is in the cornerstone of the building. Since then, Frances has served on the Oakhurst Advisory committee, regularly donates to the Heritage Collection, has established two endowments at Minnetrista, and is a major donor that follows the evolution of Minnetrista carefully.

In a fitting tribute to her legacy and that of her family, the City of Muncie installed the monumental sculpture, Passing of the Buffalo by Cyrus Dallin in the Walnut Street roundabout in downtown Muncie. The sculpture was originally purchased by Edmund Petty in 1976 and presented to the city in memory of his father Fred J. Petty.

Mrs. Sargent continues to support the Muncie arts and culture community and epitomizes the role defined by this award for “significant and sustained contributions.”

Muncie Arts and Culture council seeks to create, educate, advocate, nurture, and inspire integration of the arts via civic initiatives and through engagement with individual artists and arts organizations.