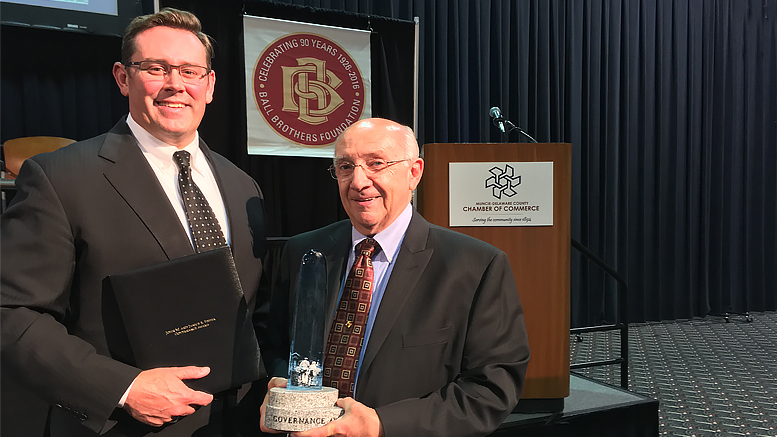 Muncie, IN— Ball Brothers Foundation has selected John Craddock, President of the board of directors of Community Enhancement Projects as the 2017 winner of the John W. and Janice B. Fisher Governance Award. The award, which recognizes the outstanding service of a board member to a Delaware County nonprofit organization, was presented at the Muncie-Delaware County Chamber of Commerce’s annual dinner on October 19.

Craddock has served on the board of Community Enhancement Projects for over 20 years, helping to shape and grow the volunteer-run organization which focuses on the beautification of Muncie and Delaware County. John has served on nearly every major committee of CEP, moving dozens of projects through the planning, design, financing, and construction phases. 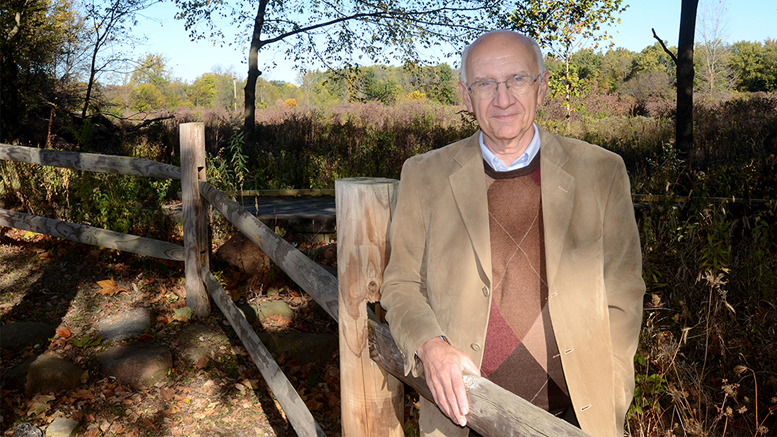 Through his years of professional experience, John is well-versed in coordinating and securing resources, a skill set he brings to his role with CEP. John plays a leading role in meeting with nonprofit leaders, foundation personnel, business and industry executives, and government officials to share plans, seek feedback, and request funding for CEP projects. Over the years, John has also worked closely with Ball State University’s Department of Landscape Architecture to develop immersive learning experiences for students who have benefitted from hands-on “design-build” opportunities through CEP.

From median beautification to roundabout landscaping to the development of parks, John has played a key role in coordinating projects that increase the attractiveness of our city. But no CEP project under John’s leadership has been more ambitious or transformative than the creation of the six-mile White River Greenway and the overlooks which span the trail, providing panoramic views of the waterway he has spent his life helping to restore. One of the earliest advocates for a river trail through the heart of Muncie, John has worked over the past 20 years to marshal resources to build, maintain, and improve the trail and its overlooks. Today, John continues to pursue the bold vision for the White River Greenway that was set two decades ago through his work as CEP’s representative for the Kitselman Trailhead which will connect the White River Greenway and the Cardinal Greenway via a historic bridge. A tireless ambassador for the project, John has been a leader in convening stakeholders, pursuing funding, managing nearly $1 million in project funds for CEP, and promoting this transformative project.

John’s involvement in a variety of other organizations, including Red-tail Land Conservancy, Cardinal Greenway, the Land Conservation Fund Grants Committee, and the Muncie Action Plan, further ensures that efforts to preserve, protect, and beautify land and water are well-coordinated.

“John’s persistence and unwavering belief in the power of public spaces has truly shaped our city’s parks, medians, roundabouts, and river,” shared Jud Fisher, President & COO of Ball Brothers Foundation. “BBF received 20 outstanding nominations this year for the Fisher Governance Award. It was a very difficult decision, but in the end, it was John Craddock who stood out. His leadership is an inspiration.”

Craddock was presented a handcrafted glass award crafted by Brent Cole of the Marilyn K. Glick Center for Glass at Ball State University during the Chamber dinner in recognition of his commitment to governance excellence. Community Enhancement Projects also received a grant of $10,000 given by BBF in Craddock’s name.

The Governance Award honors the memory of Delaware County philanthropists John W. and Janice B. Fisher. Mr. Fisher (1915-2009) brought strong and compassionate leadership to Ball Brothers Foundation during his decade of service as president and chairman. Mrs. Fisher (1916-2010), daughter of industrialist-philanthropist Edmund Burke Ball, shared her husband’s enthusiasm for their community and was a strong advocate for issues related to education and wellness.

With assets totaling approximately $170 million, Ball Brothers Foundation annually makes grants in support of arts and culture, education, the environment, health, human services and public affairs. In addition to grants, the foundation gives two annual awards, the Fisher Governance Award and the Excellence in Teaching Award. The Muncie-based family foundation gives priority to projects and programs that improve the quality of life in BBF’s home city, county and state.