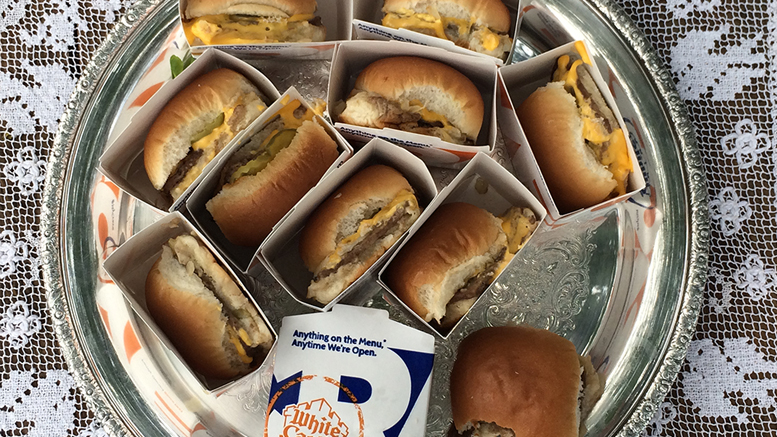 There aren’t many things I wholeheartedly believe in these days, but one is the intrinsic goodness of White Castle sliders.

Of course, some folks despise them.

“Ewwww,” they sneer, wrinkling up their snouts while venting their disgust at the mere mention of the little hamburgers, also known by the fetching nickname “gut bombs.”  Given the unreasonable culinary vagaries of these days, when even a wholesome condiment like lard is under attack, I suppose one can understand why.

White Castle sliders can be just a tad greasy. I’ve always presumed they were nicknamed sliders because they’re slick enough to slide down your throat with a minimal amount of chewing, sort of like raw oysters on the half-shell, only made out of cows.

But the aroma encountered while ensconced in a car with a fresh bag of sliders resting in my lap makes me swoon. While I never text and drive, I am a serial offender when it comes to motoring along anonymous country roads while blindly popping sliders from their cardboard sleeves into my mouth. In my life, I have probably done this 50,000 times. No, I wouldn’t want to smash into some bridge abutment while in the throes of a slider feeding frenzy … but I can think of worse ways to go.

Now, in these times of “fake” everything, White Castle is coming out with a new vegetarian “fake-meat” slider. Called the Impossible Slider, word is it might even taste good. As an unapologetic slider fan, I am all for this. Vegetarians are good people. They deserve sliders, too. Besides, in recent years, we White Castle addicts have practically needed a score card to keep track of all the exciting new slider advancements.

White Castle has offered the Pizza Slider, the Grilled Chicken Italiano Slider, the Seafood Crab Cake Slider, the Fish Slider, the Chicken Ring Slider, the Breakfast Slider and probably other sliders. How do they taste? Beats me. I’ve never eaten anything but God’s own slider – the traditional slider with cheese. Given all those other sliders, though, a slider lacking meat doesn’t sound too farfetched.

As The Star Press’ former food guy, the Chow Hound, I was privileged to incorporate sliders, bought at the newspaper’s expense, into every feature story I could possibly crank out. Back in my prime, I could work the beauty of sliders into a story about prunes.

Early one November morning, I walked out of Daleville’s White Castle with 100 sliders. They were crammed into what amounted to little cardboard suitcases, on what was the happiest day of my journalism career. Naturally, by the time I got these sliders back to the newsroom, there were only 83 left. But I wrote about those 83 sliders as the basic ingredient in a number of recipes White Castle was promoting for the upcoming holidays.

Unfortunately, the only one I remember testing was the slider stuffing. This basically required some sliders, a little water and a food processor, as I recall. You tossed your sliders and water into the processor, zapped them into a coarse grind and voila, your slider stuffing was ready to cram inside some poor dead turkey. The stuffing tasted just like Grandma used to make – except for the little dill pickle chunks.

You can still find the recipe for slider stuffing on the Internet. There were also other recipes we tried, though I can’t locate them now. But far more important than any White Castle slider recipe you can think of is the simple slider’s profound ability to change lives for the better, as I was relating to some buddies not long ago.

This happened back when I was a loser, a fact that may come as a shock to my closest friends.

Well, yeah, technically. So years ago after a night of debauchery in Indy, I was riding home on my Harley-Davidson. This was in the days when riding a Harley marked you as a free-spirited, independent, scuzzy individual. The way I always explain the difference is, these days, Harley riders tend to be affluent, upwardly mobile go-getters, sitting in fancy seafood restaurants dining on crabs. Back when I started riding Harleys, half the guys I rode with had crabs.

Anyway, needing a breather, I pulled into a White Castle at 3 a.m. and ordered. Sitting there half wasted and alone, pondering where life had led me, morosely chewing my sliders while staring at my reflection in the big White Castle window, I told myself, “Boy, you’ve hit rock bottom. Now finish your sliders, go get married to a wonderful woman and start a 401 (k) account.”

Would I have experienced the same life-changing revelation staring at my reflection over, say, a Whopper? Doubt it.