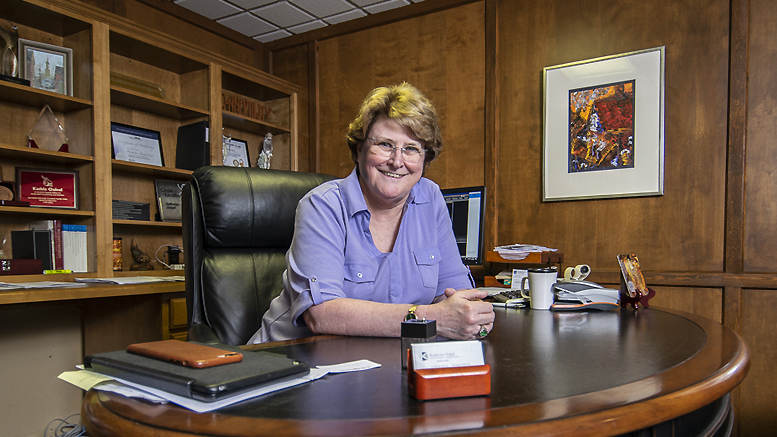 Katherine Onieal is pictured in her downtown office. Photo by: Mike Rhodes

Muncie, IN— Katherine Onieal is very much an entrepreneur, having started a number of businesses in Muncie. She currently owns two businesses downtown: Katherine Onieal Investment Services at the corner of East Jackson and Walnut Street, and the Epic Escape Game, located on Jefferson Street.

Onieal has worked downtown since 2008, when her firm of A. G. Edwards and Sons was sold and she needed a new home. In 2012, she started her own firm— Katherine Onieal Investment Services. Prior to opening her new business, Onieal was very involved in the community, evidenced by the numerous awards displayed throughout her smartly appointed office.”It’s hard to name an organization that I wasn’t a part of at one point or another,” she said. “As I got older and moved into another phase of my life, I’ve moved back a bit and have let the next generation take over.”

Onieal says she is very supportive of downtown, but doesn’t have the kind of retail operation like many downtown businesses do. “We’re not retail, but we find downtown to be very convenient,” she said. “Our clients love downtown—they can park in front or in back, so we are easy to get to.”

“We love our office downtown,” she said. “We love the sunlight coming in. I’ve always noticed this building— it used to house Standt’s Jewelers. The office space stayed vacant for two years, so when I decided to go independent, I decided to invest in this office. It has been well worth it. I’m of the age to be able to retire, but it’s not going to happen. I enjoy my work, my environment, and my clients too much.” 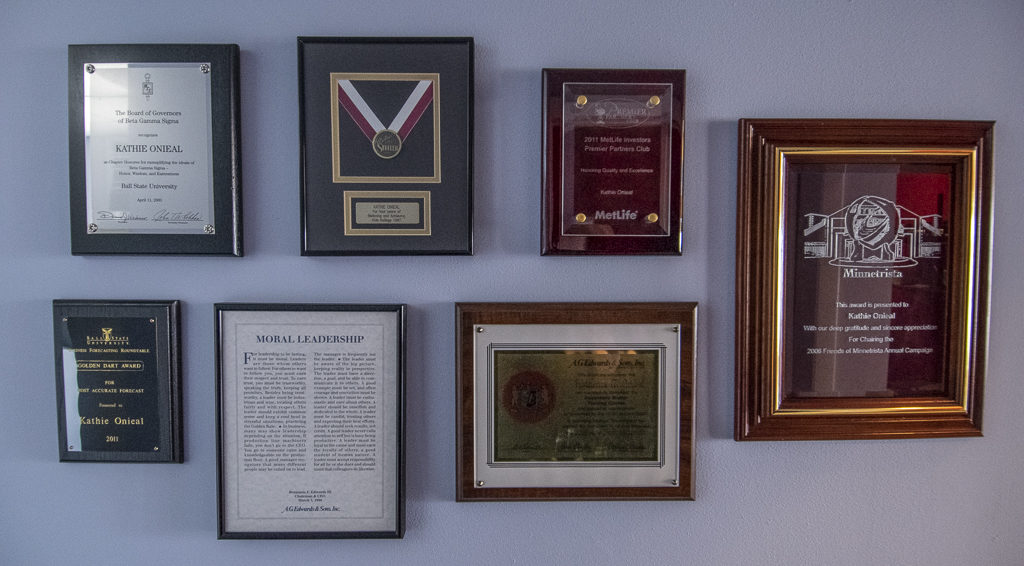 A few of the many awards and honors displayed inside Katherine Onieal Investment Services.

Onieal is an investment broker and has 32 years of experience in the field and is affiliated with Raymond James, Inc.  The thing she enjoys most is just sitting down and interviewing her clients to help them along with their investment decisions and providing them with their options. “I handle pretty much anything you do with money— from certificates of deposit, stocks, mutual funds, bonds, and annuities clear through your estate planning,” she said.  “I have a huge firm behind me (Raymond James) so we are not limited to just this local office.”

Onieal said, “When I am working with a client, if I need education on a given subject or particular products for example, Raymond James will provide that for me. I am not limited unless the client doesn’t have any money to work with. That’s the hardest part I can’t overcome. I know there are some investment brokers that say, “If you don’t have (X) number of dollars, we can’t work with you.” I’ve never been like that. We’re not under any quotas or pushed by any firm. We are truly independent and we work the way we work because it is best for our clients. And I think they feel safe and comfortable with that.”

After owning Happy Clean & Smart on Kilgore Avenue for 10 years, Onieal sold that business, rested for a while and then launched her Epic Escape Game business in 2016.  “I missed Happy Clean & Smart, and I wanted to create something one more time,” she said. “Frankly, looking through the internet, I came across escape games, which I’d never played.  I researched the topic and became fascinated by it. I was able to buy the building on Jefferson, which was perfectly setup for escape games.”

Epic Escape has five rooms. Two are identical so players can compete with another team from work or school.

“The idea is we tell you a story — you’re in the story— and you have 60 minutes to get out of the room by solving puzzles and questions of that nature,” she said. “Nobody is permanently locked in. You don’t have to be afraid of claustrophobia or anything like that. Our rooms are professionally built, and its fun! We try to create an environment that makes players think they are really under a deadline and are trying to get something done. If you take too long, a big buzzer goes off and you’re done.”