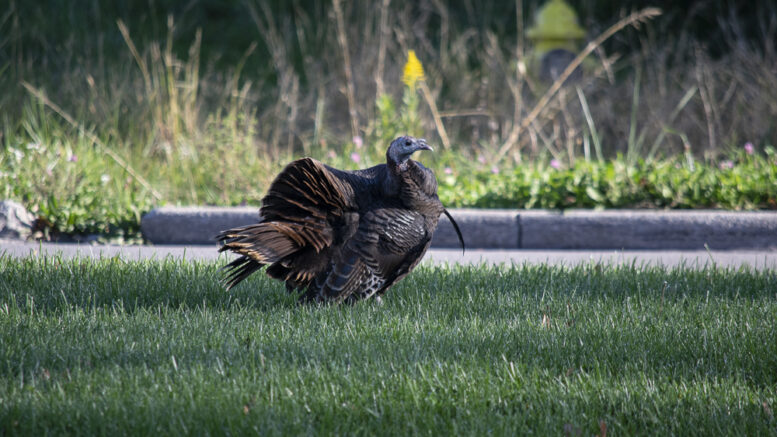 By Pat the Roaming Southside Turkey—

HELO! Menie of YOO have seen me OWT on 29th STReett. Gobble, Gobble!

(Ok enough of that.)

Yeah, I know that sounds like the introduction to a 12-step program for you humans who are trying to give up something that’s bad for you. But consider it my introduction to you and what has become something very good for me.

I am referring to being Muncie’s famous roaming southside turkey.

“Unless you are some stupid ostrich who’s had its head stuck in the sand all its life, you know that this is a pretty rough time of year for us turkeys, what with Thanksgiving and all. So how did we get so lucky – and yes, I am being totally sarcastic here – to wind up as America’s favorite dinner table fare for the holiday?”—Pat the Roaming Southside Turkey

Or better yet for my fellow bird brethren, picture all the happy family members gathered around the dinner table after saying grace. Then they commence “ooohing” and “ahhhing” when Grandma walks in from the kitchen bearing a 30-pound mound of shrimp cocktail and six bottles of St. Elmo’s killer shrimp sauce?

Still, I can’t complain. After all, this has been an exceptionally fine two years for me here within the Muncie city limits. Out there in the country you’ve got to contend with coyotes! Eagles! Snakes! Weasels! Trust me. If you’ve never been set upon in the middle of the night by a hungry weasel, it’s a nightmare.

But another reason my life has been so fine of late is because here in the City of Muncie I’ve stirred up loads of good press. Face it, how many other turkeys do you know personally? Any? None, that’s how many! This is because in most places we’re considered nothing more than walking, squawking chunks of dark and light meat. Consequently, most of us turkeys live lives of anonymity at best, and at worst lives of quiet desperation.

“Whoa!” these guys snicker when they get together with their other turkey buddies. “Pat certainly makes my wattle waggle!”

One look at my picture and it’s easy to see why. A picture of plump turkey perfection, the photo of me at the top of this page was snapped by Mike Rhodes, the Editor-in-Chief of MuncieJournal.com one beautiful autumn day when the light was just right and I, naturally, was looking my usual radiant self. What’s more, pulling over and stopping his car to get this shot, he risked a confrontation with a fowl-mouthed (haha, OK, I mean foul-mouthed) motorist who was an apparent turkey hater.

The great thing is, here in Muncie, turkey haters are few and far between. Instead, I have become a beloved figure – you might even say a mascot – especially for the south side. Passing motorists wave. I’m sure they’d be tossing me turkey snacks, too, if they happened to have any berries and insects in their hands. Best of all, little kids call out my name with the same enthusiasm they would normally reserve for Mickey Mouse.

In a word, I am appreciated! I even have my own personal road crossing sign on 29th street! 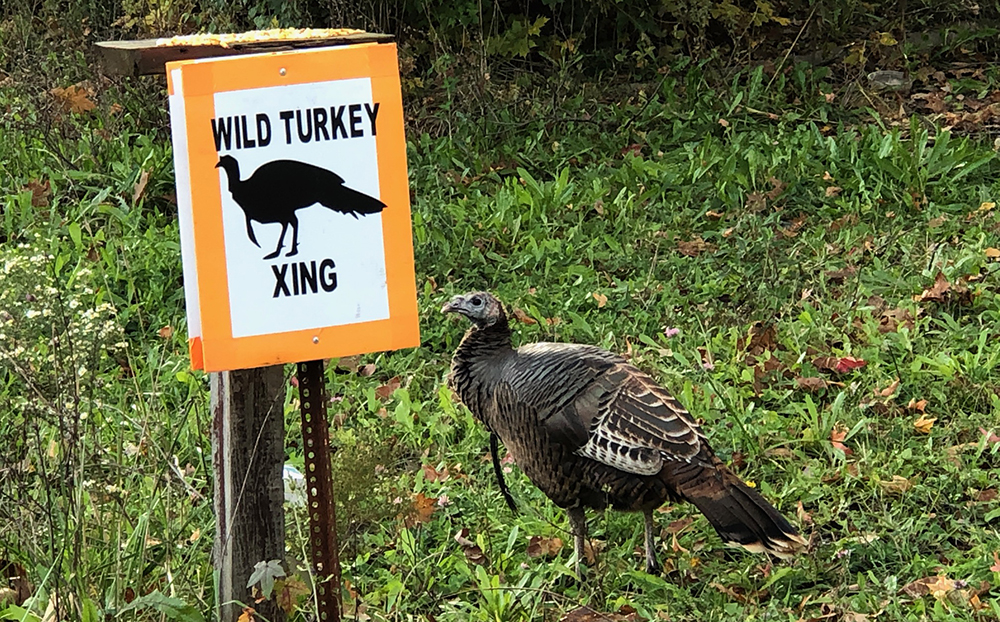 Pat the roaming southside turkey’s personal street crossing sign on 29th street. Notice that Pat is posing exactly like the turkey image on the sign. Photo by Mike Rhodes

Furthermore, I appreciate the Muncie humans, too, which is really saying something! Do you have any idea how unusual it is for a turkey to appreciate humans, especially in November?

Anyway, word is my personal story of turkey triumph has even reached the lofty office of Muncie’s Mayor Dan Ridenour! What’s more, a little bird told me a mayoral proclamation praising a certain “famous roaming southside turkey”  – that’s ME, remember? – may be coming down the political pike any day now! Wait, it’s already happened. See the video above?

So what do I say about this?

BUT … whereas I am an outstanding example of my species, and whereas I have been the first known gobbler to contribute to improving human/turkey relations, and whereas I’m so hot (a state of being having nothing to do with oven temperatures), and whereas it is generally understood and accepted that I am cherished, loved and admired by everyone in Muncie, and particularly my dear friends on the southside …

… I could probably convince myself to humbly accept this honor from our esteemed mayor.

Besides, how many mayoral proclamations do any of you folks have?

Editor’s note: As you might suspect, a turkey can’t really write stories. A couple of real turkeys (Steve Lindell & Mike Rhodes at Woof Boom Radio) concocted this idea during a staff meeting. A call was made to Shareen Wagley at the mayor’s office to make arrangements for the mayor to record the video above.  John Carlson was also called and was told that we needed ‘someone to write a really stupid story’ and that “he was just the man to do it.” He laughed and wholeheartedly agreed. For our out-of-town readers, the turkey above has been roaming around Muncie’s southside for an estimated two years. Local drivers pass Pat the roaming southside turkey almost every day at the corner of Madison and 29th Street. Pat’s interview with Woof Boom Radio News can be heard below.

Happy Thanksgiving to all!  Gobble! Gobble! 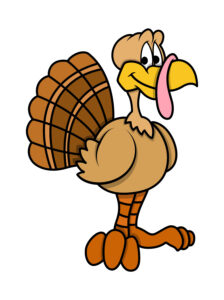