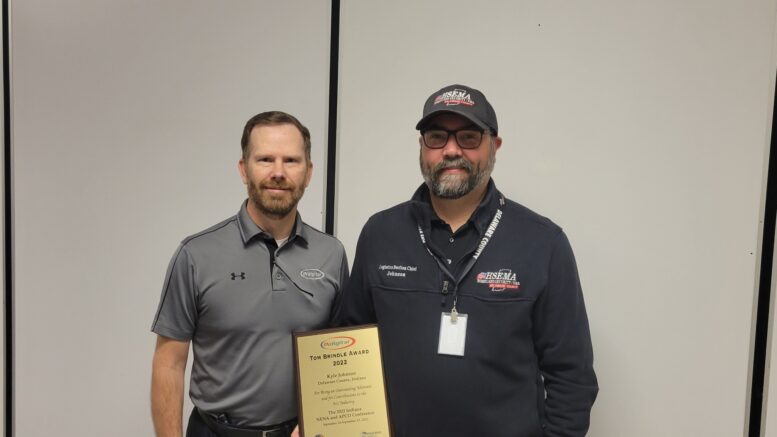 L-R: Shane Rekeweg from INdigital is pictured with Kyle Johnson.

DELAWARE COUNTY, IN—Each year, INdigital awards the Tom Brindle Technology Award.  The award is named after the former Kosciusko County 911 Director and former Kosciusko Sheriff Deputy who passed away in 2011.  Brindle was also the Indiana NENA President when he passed away.  He was instrumental for INdigital as being a pioneer and visionary for 911. His 911 center was a beta site for Text to 911 and other technology for Indiana.

From INdigital—”The Tom Brindle Technology Award is an acknowledgement of technical contributions to 911 services in Indiana. Brindle was a thought leader in Indiana, providing guidance, ideas, and leadership on how to use technology to improve 911 services for our citizens.  The parameters for this award are nearly limitless, we are seeking individuals or agencies that have used technology in some form to improve public safety services within the State of Indiana.  Contributions to 911 services can be—but are not limited to deployment of new systems, software, policy, organization and or procedures that improved 911 services utilizing technology.”

‘The Delaware County 911 Center faced many challenges coming in to 2022.  With a new Director and Deputy Director coming on board In January, one of the first tasks was the COVID delayed deployment of a new CAD system.  The new CAD build wasn’t anywhere close to where it should be, and the Go Live date was set in stone for the middle of June.  Kyle Johnson, who is the GIS Coordinator for Delaware County, would prove instrumental in the successful deployment of the new CAD.   The task was definitely daunting. Kyle was faced with completely remapping the entire county to meet the requirements of the County Fire and EMS agencies.  He worked day and night to meet with all involved parties and completely redo all of the mapping.  There were hundreds of hours involved.  He did it with a smile on his face and never complained. The end result was a completely remapped response map for the entire county.   It is impossible for me to portray in this short write up about what a difference this made to the successful launch of this new CAD. Without Kyle’s dedication and tireless work, this launch of the New CAD wouldn’t have been possible.

“Kyle is often called upon by not just the 911 center, but many other departments in the county to assist with mapping issues as well as a host of other assistance.  He is truly dedicated to not only his position, but also to the entire county.   In addition to GIS work, he is also an instrumental team member of the Emergency Management department as well.  His contributions not only have been an integral part of the success in the 911 Center, but also the county as a whole.”